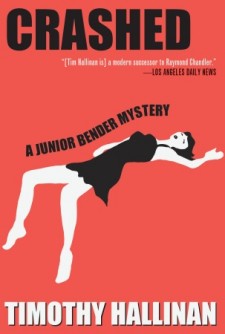 Our November 6th elections sent me on a binge. It was a spree of playing hooky from work, dilly-dallying in the hot tub, and drinking wine with friends before it morphed into a why-the-Democrats-won-and-the-Republicans-didn't reading rampage. Most recently, it's been a bender of another sort, a Junior Bender mystery, Crashed, by Timothy Hallinan.

Junior Bender's dad simply named him Junior, kindly sparing him life as "Merle." Junior has been sparing himself in various ways ever since. He doesn't have a 9 to 5; work occupies only several days per month. He's whittled down his possessions until they fit into a single suitcase. The Snor-Mor hotel, his current residence, is pretty much what you'd expect from its name. Junior isn't. He has been a career criminal for 17 years, but that's not to say he doesn't have a working moral compass. The victims of his burglaries aren't poor little kids or tired factory workers, but someone who "could afford to lose it, who in the larger scheme of things was entirely unharmed." Junior isn't a bungler/burglar in the mold of Donald E. Westlake's chronically unlucky John Dortmunder; nor is he a serious killer à la Thomas Perry's hitman. He's a guy who would run onto a freeway during rush hour for what he sees as the "one hundred percent potential" of an unopened wall safe, yet he pines for his ex-wife Kathy and adores their 13-year-old daughter, Rina. While his loyalty to Kathy prevents him from being a womanizer like Jonathan Gash's crook, Lovejoy, Junior shares Lovejoy's willingness to divvy out personal justice to enemies and to dispense criminal tips to the reader. (I really must find a need to rent storage space under a fictitious name, using fake ID.) Junior is more loyal to his friends than Lovejoy is, and there's an entertaining stream of them: the wheelman Louie the Lost; Junior's mentor, Herbie, who specializes in breaking into offices of psychiatrists and then blackmailing them (this is a guy with unconventional ideas about closure); an international fence named Stinky Tetweiler, who weighs "300 hard-earned pounds"; and an endearing young Chinese gangster who shares with Junior a love of James Dean.

Like Lawrence Block's burglar, Bernie Rhodenbarr, Junior loves books. In fact, since his divorce, other than sleeping in motels and eating in restaurants, Junior's life has consisted largely of reading for the book characters' company. His Big Three are William Gaddis's 1955 book, The Recognitions ("about forgery and faith, and between those things you can crowd most of life"), Herman Melville's Moby-Dick (a captain's obsession forces him to hunt a great white whale), and the not-to-be-missed 18th-century Chinese masterpiece by Cao Xueqin, The Dream of the Red Chamber.*

Okay, let's get our noses out of Junior's books, and turn them toward the jam he gets himself into in Crashed, the first book of the series.

It's time to pay child support, and as the book opens, our narrator, Junior, is beavering away in the uninhabited mansion of Rabbits and Bunny Stennet. Despite their cuddly names, they are murderous folks, and Junior shivers when he realizes he's been set up. He has no choice but to do a job for Trey Annunziato, the Stanford-educated heir to the San Fernando Valley's most diversified crime family. (Trey's dad, Deuce, named her Frederick G. Annunziato the Third; obviously he wasn't as sensitive as Junior's dad Merle, but at least Deuce called her Trey rather than Fred.) Trey has an ambitious plan, and it involves bankrolling a porn movie starring the troubled Thistle Downing, a former beloved child television star. Nothing––sabotage, Thistle's problems, whatever––must prevent the movie's completion. This is Junior's job, and it's one he really doesn't want to do. So how can he get out of it? 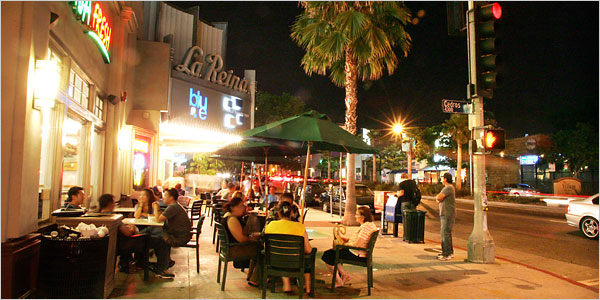 Complex female, as well as male, characters are par for Hallinan's books. Most of his women and children are both vulnerable and tough in their ability to overcome difficulties; men vary in their desire or capability to rise above self-interest. In this book, there is a contrast between two women who share miserable childhoods: Thistle Downing, a talented actress who grew up on television in front of millions before hitting the skids of drug addiction, and Trey Annunziato, a third-generation hood, who can't afford to show any sign of weakness, and who needs to take advantage of Thistle. These complicated women are neither entirely sympathetic nor unsympathetic; both are interesting. As for the other delinquents, while you wouldn't want some of them to babysit your kids, most have redeeming qualities. (I said "most.") Like those in the Poke Rafferty series, characters are so well-drawn, you'd swear they breathe. The witty descriptions are a Hallinan trademark. Here's one dude at first meeting:


The doorframe was entirely filled by a very wide gentleman of Hispanic ancestry wearing black from head to toe. The width was the product of years on the weight bench, years that had bulked his shoulders and chest and built muscles at the sides of his neck. It wasn't Gold's Gym bulk, either; it was California Prison System bulk. His shirt was one of those '60s-inspired mutants without a collar, and the gold chain around his neck was probably heavy enough to tow a car. His expression said he could eat me for breakfast without a knife and fork.

The writing is intelligent, relaxed, and fun to read. Crashed is a pleasurable outing, without the personal risk, to the criminal underbelly of Los Angeles, where moral ambiguity fills the air. It really hit the spot.
Note: I received a free advance review copy of Timothy Hallinan's Crashed, published by Soho Crime earlier this week; it's currently available in ebook, hardcover, and audio format. Lionsgate has purchased film/TV rights, so let's hope....

*Cao Xueqin's semi-autobiographical The Dream of the Red Chamber was translated from the Chinese into English by David Hawkes during the 1970s. This translation forms the first eighty chapters (Vols. I-III) of The Story of the Stone, published by Penguin Classics in a five-volume set. The remaining forty chapters (Vols. IV-V) are John Minford's English translation of the work done by Cheng Weiyuan and Gao E to complete the novel.

I enjoyed Junior's three touchstone books, and I highly recommend them. I haven't read the other books that these have inspired Junior to read, but I have definite plans to do that. Junior's reading is a wonderful perk of Crashed, and I hope his future law-breaking allows him time for more great books to share with Hallinan's readers.