I don't read all that many cozy mysteries, but I have a soft spot for Patricia Wentworth's Miss Silver series. Miss Silver is a retired teacher who may be sitting in a corner, knitting, when visitors come to call on a country house.

The visitors are told Miss Silver is an old family friend or relative, and they assume that the family is providing a little bit of comfort and company for an old lady living in genteel poverty. Little do they suspect that Miss Silver is unobtrusively gathering information that will reveal a blackmailer or even a killer.

I read the whole Miss Silver series (32 books!) back in the 1970s, when they
were already decades old and Patricia Wentworth had been dead for well over a decade. In the last couple of years, I've enjoyed revisiting some of them in audiobook versions, perfectly performed by Diana Bishop.

What I didn't realize is that Patricia Wentworth wrote many other mystery books outside the Miss Silver series; a couple of dozen standalones and three short series. Luckily for us, in addition to the Miss Silvers, Open Road Integrated Media is reissuing the other books in ePub and Kindle ebook formats. Here are the series titles:

When the handsome but evil Ross Craddock is found killed with his own gun, there is a wealth of suspects who had the motive to kill.  The London Metropolitan Police department's Inspector Ernest Lamb, and young Detective Frank Abbott have their work cut out for them.

Who Pays the Piper

Lucas Dale is determined to break up the engagement of Susan Lenox and Bill Carrick, so that he can have Susan for himself. A spot of blackmail seems to have done the trick, until Dale is found murdered. Lamb and Abbott suspect Carrick, but soon find that there are quite a few others who wished Dale dead.

Pursuit of a Parcel

Lamb and Abbott become enmeshed in a deadly game of World War II espionage, with agents and double agents, mysterious parcels and a beautiful young woman in danger.

A mysterious woman warns Hugo Ross not to take a job with an eccentric inventor, but Hugo needs the money. Soon he finds himself embroiled in a world of espionage and danger, and calls on Benbow Smith of the Foreign Office for help.

Benbow Smith becomes involved in an investigation to uncover the forces working to eliminate voices in favor of disarmament.

When bride-to-be Anne Carew disappears, her desperate fiancé, Captain Oliver Loddon, contacts Benbow Smith. Smith believes this is just the latest of a series of abductions over the past few years by one man, but the police disagree. Loddon will risk his own life to save Anne.

On the very day Meg O'Hara asks her Irish spy husband, Robin, for a divorce, he disappears. Time passes and he's presumed dead, but then Meg receives a message suggesting otherwise. Frank Garrett of the British Foreign Office investigates, along with Bill Coverdale, who has been in love with Meg for years.

While Frank Garrett investigates a series of thefts of valuable artworks, his nephew goes undercover to penetrate an international gang of dangerous thieves.

There are too many other Wentworth mysteries to list here, even when you exclude the Miss Silvers. But if you want to see which ones are now available from Open Road, just head here.

If you enjoy romance novels, Wentworth started out as a romance writer and Open Road has a couple of those as well: A Marriage Under the Terror, set during the French Revolution, and A Fire Within, which hints at the Miss Silver to come.

Note: Open Road Integrated Media provided me with review e-copies of Fool Errant, Dead or Alive and The Blind Side.

Review of Judith Flanders's A Bed of Scorpions

A Bed of Scorpions, by Judith Flanders (Minotaur Books, March 1, 2016)

Samantha “Sam” Clair is an editor at a small London book publisher. The constants in Sam’s life are her colleagues, her powerful solicitor mother, Helen, her fatherly upstairs neighbor, Mr. Rudiger, and now her boyfriend, Jake, a homicide detective with London’s Metropolitan Police. If you want to know how Sam came to be in a romance with a police detective, read the first book in the series, A Murder of Magpies.

All seems well in Sam’s life this London summer. The weather is fine, her relationship with Jake has reached the almost-living-together stage, and the only fly in the ointment is the concern at the office that their company might be sold. That is, until Sam has lunch with an old friend, Aidan. Aidan, an art gallery owner, is distraught over his business partner’s having just been found shot.

Is it suicide, murder? No surprise, Jake is assigned to investigate and, of course, questions arise about whether this could have something to do with the gallery and Aidan. Since Aidan isn’t just an old friend of Sam's, he’s a former boyfriend, things quickly become awkward with Jake. Is it her desire to help Aidan that makes Sam start asking questions, or is it her crime fiction addiction that compels her? For whatever reason, she’s soon knee-deep in her own investigation. 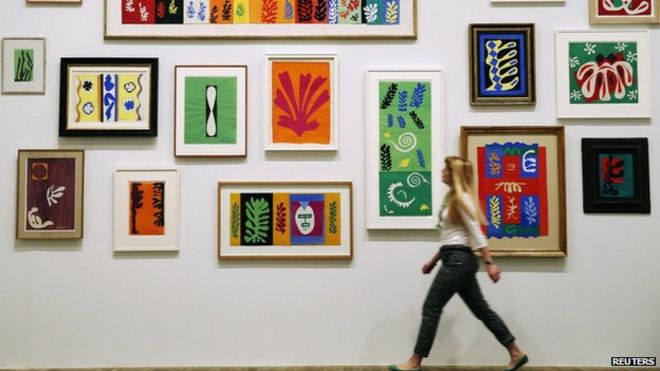 Sam is an entertaining character. She’s the opposite of her super-confident, supremely groomed, socially connected powerhouse of a mother. Sam is a klutz, her wardrobe is marginal, she likes to lounge around at home, reading and going to bed early. She’s an amusingly snarky observer of her own foibles and everyone else’s.

Though this is a cozy mystery, that doesn’t mean it’s just a bit of fluff. The plot is engrossing, with clever twists and turns, and details about the inside workings of art dealerships and publishers that are informative and add unique features to the story. And I can’t tell you anything about the climax except that it’s both inventive and hair-raising.

It’s not absolutely necessary to read the first book in the series before this one, but it’s a good idea if you can.