Random Thoughts, Or, Murder on a C-Note The big holiday will be here in a few days, but I'm not thinking of the Mexican celebration. Instead, I'm clearing the decks to be ready to read Kate Atkinson's A God in Ruins, the followup to her Life After Life (Reagan Arthur Books, 2013). I still think about Life After Life, the story of the repeating lives of Ursula Todd in 20th-century England.

A God in Ruins (Little, Brown and Company, May 5, 2015) tells the story of her younger brother, Teddy, who was an RAF pilot during World War II and never expected to survive the war. What will the 20th century have in store for him? I plan to find out as soon as possible.

I sure won't be waiting until December 15 for Christopher Fowler's Bryant & May and the Burning Man, the 12th in the Peculiar Crimes Unit series. It was published last month in the UK by Doubleday, but I am going to be patient enough to wait until May 7, when the audiobook comes available in the US on Audible. The narrator, Tim Goodman, is so wonderful, I prefer the audiobook versions of the series anyway, so I suppose it's a happy oddity that the audiobook is available in the US more than seven months before the print edition.

Remember back in 2013 when it was revealed that Robert Galbraith, the pseudonymous author of The Cuckoo's Calling, was none other than J. K. Rowling? Since then, we've had a sequel in that Cormoran Strike/Robin Ellacott series, The Silkworm, which I thought was at least as good as the first. I was just talking with some mystery-reading friends the other day about when we might see another book in the series, and that got me to researching . . . .

I learned that the third book in the series will be called Career of Evil and will be coming out sometime this autumn. Yippee! Though, judging from her last book, I would have thought there is no mystery that Rowling sees the publishing business as the career of evil.

I also learned that the BBC plans to dramatize the series, which is terrific news. I've been enjoying the Grantchester series, originally produced by Britain's ITV and shown on PBS this last season––even though, frankly, I'm not a big fan of the Grantchester books. If ITV could make such an excellent series from those books, I'm hoping BBC will do even better with the superior material of the Cormoran Strike books.

I look forward every year to a new Armand Gamache/Three Pines book from Louise Penny. One comes every August, like clockwork, but it always seems like such a long wait in between. If you feel the same way, you might want to check out this site, which is currently running a series about the real places that inspired locations in the books. It's a lot of fun to read about the real inspirations, like the very un-scary-looking pink house that nevertheless inspired the creepy Hadley House in Still Life.

Louise Penny's monthly newsletter is always an entertaining read too. It's almost like getting a letter from a friend. You can sign up to read her newsletters here. One bit of recent news from her is her husband's recent Alzheimer's diagnosis. She writes with such affecting openness about how this has affected their lives.

My brother-in-law, Jeff, enjoys traditional mysteries and is a big-time completist when it comes to series. Once he starts a series, if he likes the first book, he plows through the entire series, usually without a break.

Jeff was the one who first told me about Kerry Greenwood's Phryne Fisher series years ago, and that's now up to 20 books. I think I told him about Rhys Bowen's Her Royal Spyness cozies, about the impoverished Lady Georgiana Rannoch, who is 30-somethingth in line for the throne of England. That reminded him of another Englishwoman, Daisy Dalrymple, who decides to make her own living as a journalist rather than rely on her Viscount father.

Daisy's connections to the members of the upper crust allow her to access the kinds of places that are closed to working-class types like police detectives. St. Martin's publishes attractive paperbacks of the series, and seems to be starting over at the beginning. The first book, Death at Wentwater Court, was just republished in March.


What makes a good spy novel? 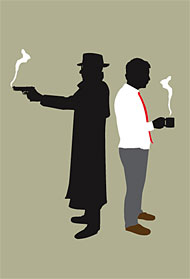 I was on a real run with C-initialed topics, but I can't resist adding one of these things that's not like the others. "What makes a good spy novel?" is the question recently asked of Olen Steinhauer in The New York Times. As a voracious reader of espionage novels, I was taken by his response:

Depends on the reader. For me, it’s the moral muddiness of the ends/means equation that comes up more often in spy fiction than in, say, murder mysteries. The best espionage stories not only ask questions about how spying is performed, but they also question the value of the job itself. And when the profession becomes a metaphor for living, the spy novel can delve into the very questions of existence, while thrilling the reader with a convoluted plot. Do all that well, and you’ve got a potential classic on your hands. 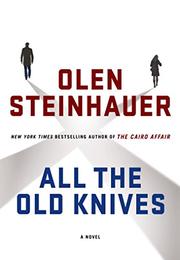 I'd say that quote is a particularly apt description of Steinhauer's newest novel, All the Old Knives (Minotaur Books, March 2015).
Posted by Sister Mary Murderous at 4:00 AM