What is it about warmer weather that makes it feel like time for thrillers? I know I listen to a lot of books when I'm mowing the lawn, and a thriller keeps me going at a good pace.

Two summers ago at about this time, I was mowing to Jason Matthews's Red Sparrow (see review here), the first in a contemporary series introducing Russian agent Dominika Egorova and CIA agent Nate Nash. In Red Sparrow, which won the Edgar Award for Best First Novel by an American Author, Dominika is a Russian patriot, but a reluctant agent, who goes from targeting Nate to teaming up with him and becoming a double agent, supplying the US with information about the nefarious characters working for Vladimir Putin's corrupt government. Dominika's ace in the hole is that she has synesthesia. In her case, this unusual trait makes her see colored auras around people that infallibly clue her in to what they are feeling and whether they are good guys or bad guys. I thought this was a little bit gimmicky, and I had a few other nits to pick with Red Sparrow, but nothing that would keep me from looking forward to another read. In Palace of Treason (Scribner, June 2), the stakes and risks are much higher, with Dominika now working as a mole within Russian intelligence and always in danger of being found out. That's especially threatening, since Matthews's view of the Russian intelligence service is that it's home to a crew of psychopaths, more than a few of whom enjoy torture as a hobby.

Publishers Weekly says this is a top summer pick in the mystery/thriller category. I'm a little worried about early readers' report of graphic descriptions of torture, but I'll probably still read it, given Matthews's skill in writing a taut, heart-pounding thriller. I almost forgot to say that I hear he continues with a feature he started in Red Sparrow, which is to include a recipe at the end of each chapter that relates to the setting and action of the chapter. I could see that being viewed as too gimmicky as well, but since I still use the soubise recipe from Red Sparrow, it's a gimmick I'm OK with.

Phil Hogan's A Pleasure and a Calling made my list of top reads last year. Its main character, William Heming, is a diligent and successful estate agent in a leafy and prosperous English village. He's a private person, has a negligible social life and yearns from afar for the love of a local library assistant. Oh, and he's a sociopath; one who has a copy of the keys to every house he's ever listed and uses them for his own, hmm, I guess I'd call it social engineering purposes. I'd never want to know a sociopath in real life, but they sure can bring a subtle chill to the spine when you spend time with them in books. That's why I'm looking forward to Sascha Arango's The Truth and Other Lies (translated from the German by Imogen Taylor; Atria Books, June 23). Its main character, Henry Hayden, is a young and celebrated thriller writer, a modest and friendly guy, loyal to Martha, whom he married when he was poor and unknown. And almost none of that sentence is true, as the reader learns at the outset. Henry has built a very carefully constructed life, held together by a mortar of lies. When his edifice is threatened, he decides to take ruthless action.

Of course, it wouldn't be a book if Henry's problem solving worked. Like William Heming in A Pleasure and a Calling, Henry has to do some serious maneuvering to avoid being caught and having his whole false life revealed. The promise is that the reader will hope he succeeds. I know I couldn't help hoping Heming got away with it, so I'm looking forward to seeing if The Truth and Other Lies gives me that same deliciously perverse pleasure.

Speaking of truth and lies immediately brings to mind Austin Grossman's upcoming Crooked (Mulholland Books, July 28), an off-kilter satirical alternate history/thriller in which US President Richard M. Nixon battles the forces of supernatural evil, which is what's really behind the Cold War.

President Nixon looms large in my personal history. My first presidential election vote was in 1972 and the Watergate hearings had my dorm's TV lounge crammed full of students skipping classes to watch the drama. I always wondered about Nixon's seemingly overwhelming impulse for self-destruction. Demonology could explain a lot.

One of my favorite newer police procedural series is David Mark's DS Aector McAvoy series, set in the gritty northern English port city of Hull. The fourth in the series is Taking Pity (Blue Rider Press/Penguin, July 7), and it sounds like it may be the darkest yet. The gang violence that wreaked such damage in the previous book, Sorrow Bound, now seems even worse, as a new, more powerful gang called the Headhunters tries to take over, by eliminating all resistance in the most brutal ways possible, and with the compliance––and even assistance––of some corrupt elements within the police force. 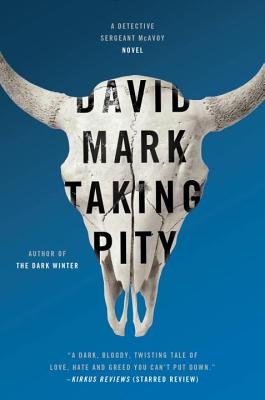 Aector is a shell of a man, as a result of the violence visited on him and his family in the last book, and the repercussions of his bringing a crooked, but popular, cop to account. Detective Inspector Trish Pharaoh is convinced that work is what will bring Aector back to life. She gives him what seems like a low-key, routine assignment: research a decades-old murder case to see if the accused, who has been in a mental asylum all this time, can be tried now that he is about to be declared competent. Naturally, this cold case turns hot in Aector's hands when it appears that more police misconduct may be involved in the case––and it may be related to the Headhunters' current relationship with corrupt cops.

The tribulations of Job seem like a walk in the park compared to what Aector's been put through recently, so I'm hoping that the title Taking Pity means that he may catch a break this time around.

Years ago, I read Heda Margolius Koválý's stunning memoir, Under a Cruel Star: A Life in Prague, 1941-1968. Now there's somebody whose life was unenviable. Born into a Jewish family in Prague, she was a target when the Nazis subjugated her homeland. Koválý was sent to the Łódż Ghetto and then to various concentration camps. Toward the end of the war, she escaped a death march and made her way back to Prague, where she had to stay in hiding. When the war ended, she found that the only family member who had survived was her husband, Rudolf Margolius, who had also been in the camps.

Liberation didn't last long in Czechoslovakia, which became a Soviet satellite in 1948. Rudolf came back from the camps an enthusiastic Communist, but Koválý was more cynical. Rudolf moved up in the party ranks, achieving the position of Deputy Minister of Foreign Trade. You'll remember that pesky Stalin guy had a habit of persecuting Party members, and Rudolf was one of those caught up in the so-called Slánský show trials, which resulted in his execution in 1952. Under a Cruel Star tells the story of Koválý's life as a subject of the Nazi and Soviet overlords compellingly, but without self-pity. It's one of the best memoirs I've ever read. 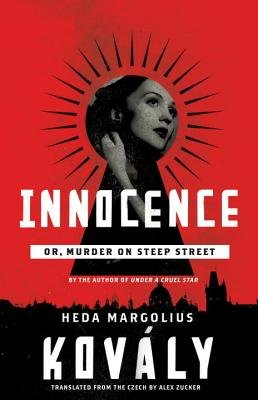 Koválý worked in publishing and translated books from German and English into Czech, including some of Raymond Chandler's hardboiled novels. The one novel she wrote herself has now been translated into English. Innocence: Or, Murder on Steep Street (translated from the Czech by Alex Zucker; Soho Crime, June 2) is clearly based on Koválý's own life, and its style borrows a bit from Chandler's. Her main character is Helena Nováková, who loses her publishing house job when her husband is wrongly accused of disloyalty to the Communist state and imprisoned.

Helena goes to work as an usher at a movie house and spends her spare time trying to find a way to get her husband out of prison. When a boy visiting the movie house is murdered, it spurs a police investigation into the movie house. Although it's quickly determined who killed the boy, the investigation provides the impetus for the reader to learn about the paranoia and duality of lives within the security state. I had the chance to read an advance review copy of Innocence and, while I think it has some shortcomings and doesn't compare to Koválý's memoir, if you're interested in Cold War novels, I recommend it.

Now let's see what other summer treats my fellow Material Witnesses have for us.