It's a Crime These Shows Were Cancelled

Awhile back, my husband and I were grousing about NBC's having cancelled our favorite new sitcom, Go On, which led to a discussion of the last time we were this irritated with NBC. That was when they cancelled, after two seasons, the wonderful series, Life.

Life ran from 2007-2009, and it starred Damian Lewis as LAPD Detective Charlie Crews. If you're one of the fans of Homeland, you'll recognize Damian Lewis as Nicholas Brody on that show. He also played Soames on the second miniseries of The Forsyte Saga and was in Band of Brothers.

The back story on Life is that Charlie Crews spent 12 years in maximum security at California's Pelican Bay facility, after being falsely convicted of murdering a good friend and the friend's family. When, finally, his conviction is overturned, he wins a bundle in his lawsuit and reinstatement to the LAPD. Reinstatement is important to him, because being back on the job will be his route to finding out who killed his friend and family, who framed him and why.

Nobody ever wants to have to rehire a fired employee, no matter how improper the firing was. Rehiring Crews is intensely uncomfortable for the LAPD, obviously because it's a reminder of a case of institutional failure, but also because the new Crews is just so odd. He discovered Zen in prison and Charlie Crews, Zen Cop, is a pretty alien creature to his colleagues, especially his new partner, the petite, tough-as-nails Dani Reese, played by Sarah Shahi. 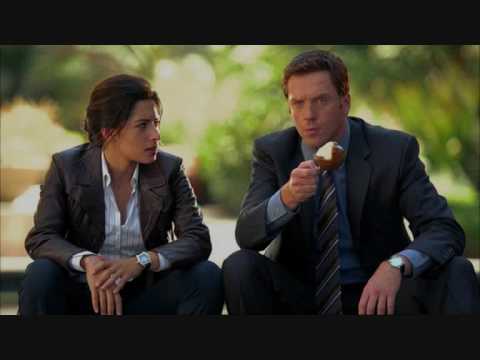 At first, you think Charlie is awfully mellow for a guy who's wrongfully spent 12 years in maximum security and who's lost his wife (who divorced him, married a yuppie and now has two kids). But mellow isn't the right word. For the new Charlie, it's normal to be emotionally naked. That has its good and bad sides. It's not good when he uses his police lights and siren to pull over his ex-wife and her new husband to talk to them about, well, everything.

On the other hand, Charlie has a passion for fruit, which he was never once served in prison, and he thinks everything in nature is a wonder. I was going to say that expressing those emotions of pleasure and wonder is the good side of Charlie's emotional nakedness, but when he always says exactly what enters his mind––like about kiwi fruit, say, when he's in the middle of an arrest––it can be awkward.

Dani's exasperation with her seemingly hippie-dippy partner turns gradually to respect and a sort of protectiveness, though, as she sees his detective instincts are still sharp while, at the same time, his new Zen attitude makes him brilliantly able to connect to witnesses and suspects and gain valuable information.

You know, I really should have been ready for NBC's cancellation of Life, considering my previous experience with their treatment of the fabulously original crime drama Boomtown. I'll be the first to admit I didn't watch the show when it first started in the fall of 2002. But a few weeks after it began, my favorite cousin was visiting when they ran a marathon of the first six episodes, and we sat down to watch one. Six hours later . . .

What a show. Set in Los Angeles, it starred Donnie Wahlberg and Mykelti Williamson as LAPD police detectives, Jason Gedrick* and Gary Basaraba as LAPD officers, and Neal McDonough as LA County Assistant District Attorney. The feature that made the show so engrossing was that each episode shows an investigation from the points of view of the different characters, and not just the police detectives and officers and the ADA, but also reporters, EMTs, suspects, witnesses, crime victims and lawyers.

If you need your storytelling to be linear, you'll either dislike this show or it'll knock you right off that straight-line compulsion. In this show, you come at an incident from several different angles; you experience it at the beginning of the episode and come back to it later, with the benefit of other things you see in between. You learn more about what's going on with one character, and that adds a layer of meaning. Then another character and another layer, and so on.

Boomtown is not a whodunnit or even, really, a police procedural. In some episodes, the crime, the victim and the perpetrator are shown right from the get-go. This is a character-driven drama about real people whose work brings them into contact every day with violence and danger, how that stays with them after the workday is done and, in turn, how what happens after work affects them on the job. The show has a style and vision far more artistic than most anything you'll see on TV, but all the show's style points aside, it's the characters that keep you watching.

Unfortunately, there doesn't seem to be a streaming option for Boomtown. You can buy the DVDs for the first season, but it looks like the second season is no longer available. That may be just as well, since in the second season, NBC stripped away much of what made the series so compelling. Somehow, they thought (and not for the first time) that if they just take an original show and make it look like a thousand other shows, that would be the ticket to success.

After the Boomtown and Life experiences, I didn't have expectations of a long life for ABC's cop dramedy The Unusuals. A good thing, too, since it lasted only 10 episodes.

I won't claim The Unusuals was up to the standard of Boomtown or Life, but it was different and entertaining. Set in New York City, the premise is that Detective Casey Shraeger, played by Amber Tamblyn, is transferred from Vice to Second Precinct Homicide, where she gets a real coming of age.

The precinct's Homicide squad is a collection of misfits. That's made clear to Casey on her first day:

Detective Allison Beaumont: Here's what you need to know about the Second: Alvarez talks about himself in the third person, Banks sleeps in a bulletproof vest, and yesterday Delahoy named his mustache.

Detective Casey Shraeger: What about Walsh?

Beaumont: On the plus side, he doesn't stare at your boobs when he's talking to you.

Beaumont: I've got great boobs. Why isn't he looking? Definitely, the most nearly normal person is Casey's partner, Jason Walsh, played by Jeremy Renner. Walsh may not have any serious quirks, but he is obsessed with finding out who murdered his previous partner––a partner who was known to be corrupt.

The other detectives include Adam Goldberg as Eric Delahoy, a deeply pessimistic man who refuses to tell anybody that he's been diagnosed with a brain tumor and also keeps dodging the medical professionals who think he should, y'know, do something about it. Delahoy's partner is Leo Banks, the guy who lives in a bulletproof vest, which turns out to be because he's sure he will die this year, at age 42, the same age his father and grandfather died. Each episode tells an interesting crime story, and the various guest stars and side characters are just as good as the leads. While much of the series was comic, it tackled serious subjects and had moments of real pathos.

For comedy, my favorite aspect of the show was the disembodied voice of Dispatch, whose acerbic remarks formed the soundtrack to every scene in a squad car. Dispatch's world-weary smoker's voice reminded me a little bit of old-time character actress Selma Diamond. The real voice belongs to an actress named Marisa Vural. Dispatch would advice squads to be on the lookout for suspects, like the man dressed in a hot dog costume who "may or may not" be wielding a samurai sword, or the Puerto Rican man wearing a cape and no pants, or she might remind everyone that it's a full moon, or share way too much information about last night's disastrous date.

Looking at the bright side, at least the cancellation of The Unusuals made Jeremy Renner available to capitalize on his Oscar and SAG nominations for Best Actor in the Oscar-winning film The Hurt Locker. The Unusuals is available on streaming video and inexpensive DVD.

Now that we're entering the dog days of summer, and there's not much of anything on TV, this is a good time for you to watch these gems––and for me to re-watch them. If you didn't see them the first time around, please give them a try now. * Poor Jason Gedrick probably swore off being in a quality cop drama ever again after this. He'd also been one of the stars of EZ Streets, a brilliant, dark cop show that aired for less than one full season on CBS in 1996-1997. That show, also starring Ken Olin (Thirtysomething) and Joe Pantoliano (The Sopranos), and directed by Paul Haggis (Crash, Million Dollar Baby) was set in a dark, decaying city in the upper Midwest and every episode was like a movie. There is a DVD, but it only includes three of the nine episodes. It's a crime!
Posted by Sister Mary Murderous at 4:00 AM