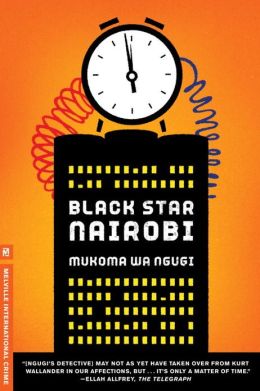 It is December 2007, and Kenyans are celebrating Barack Obama's campaign to become the United States' first black president. They are also preparing to elect their own president when Mukoma Wa Ngugi's Black Star Nairobi begins. Polls show incumbent Mwai Kibaki, a Kikuyu, trailing Raila Odinga, leader of the Luo ethnic group. This is noteworthy, because Kikuyus have dominated political power since Kenyan independence 50 years earlier. Despite the polls, some joke that Kenya is less likely than the United States to elect the first Luo president. They are proven correct when Kibaki is re-elected in what many see as a rigged election. The country explodes, and many police officers, divided along ethnic lines, commit acts of violence, too. More than 1,000 Kenyans die, and hundreds of thousands more flee the country.

Against this back drop, the private detectives of Nairobi's Black Star agency, Ishmael Fofona and David ("O") Odhiambo, who moonlights from his job as a Nairobi cop, investigate the death of a black American, whose body is found in Ngong Forest. It appears that the murder is connected to  a bombing at the Norfolk Hotel.

O and Ishmael are an unusual pair. Like the Ishmael of Melville's Moby-Dick, Ngugi's Ishmael is a man searching for a place to call home. He is a black man who was born in Madison, Wisconsin, and he became a cop there. After tiring of institutionalized racism in his police department, he moved to Nairobi to become a PI. In Nairobi, his dark skin lets him blend in, but as soon as he opens his mouth, he's identified as an American. Ishmael misses his parents back home, and the dreams he most enjoys are those in which he's eating "heart attack food--meat lover's pizza from Domino's or the properly named Kill Me Quick Double Cheese and Bacon hamburger at the Paradise Bar in good old Madison, Wisconsin." He's in love with Muddy, a poet and former Rwandan Patriotic Front member. O somewhat resembles Walter Mosley's amoral Raymond "Mouse" Alexander. Ishmael values O's loyalty and skills of observation and analysis, but he's uneasy about how comfortable O is with violence. O's mixed marriage with Mary, a beautiful schoolteacher, provides a window into the traditional animosity between Luos and Kikuyus.

Many books that invite thinking about complex issues such as identity, post-colonial racism, genocide, gender roles, and local and international politics are obviously complex. Ngugi's books of crime fiction explore these issues; yet, they are deceptively simple. Ishmael narrates in language so plain, I was initially taken aback; however, after awhile, I began to look, not only at how he is telling me, but at what he is telling me. Ngugi is a poet, and there are layers of meaning in Ishmael's choice of words. Ishmael is not a simple man; rather, he is one who values simplicity. He muses about the dualities in one's self and the differences that create gulfs and make bridges necessary between people. Ishmael thinks about what it means to feel at home physically and emotionally, and what an identity means. Ishmael's identity is found in his work, and this case changes Ishmael and O and those around them. 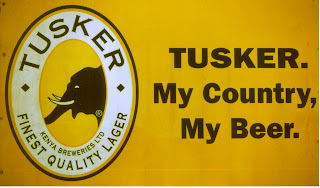 I loved Ishmael, O, Muddy, and Mary, and what I learned from them about Kenya. In Nairobi, the good guys and bad guys traditionally meet over Tusker beer in Broadway's Tavern. There, O and the CIA's African bureau chief share a joint, and Ishmael and O swap information with friendly criminals who lead them to look at the local bombing more globally.

I 'm looking forward to Ngugi's third Nairobi book. In the meantime, I'll read the series first, Nairobi Heat. I strongly suggest this series to people interested in international crime fiction, politics, and social issues. I've really enjoyed the thinking and research Ngugi has prompted me to do.

Note: I received a free galley for the purposes of this review. Black Star Nairobi was published on May 29, 2013 by Melville International Crime.

Posted by Georgette Spelvin at 9:19 PM