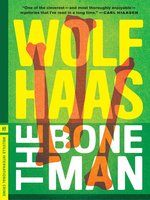 I swear I will talk to you about The Bone Man without using phrases such as "choking on words," "picking a bone with," and "putting somebody through the meat grinder," even though I'm in the mood to be snarky after reading the book's droll narration by someone I can only assume is meant to be God.

Maybe I'm wildly off the mark. The narration is an unusual combination of omniscience (the characters are psychoanalyzed, and their behavior is bemoaned or complimented), philosophizing, and breezy self-deprecation ("Anyway, where am I going with this"). The narrator pulls the reader close with chatty little questions ("she looked like that actress in the French film—real quick, what's it called again, the one they reran on TV recently") and heartfelt advice ("Now, when you're close to hysteria, it's best if you eat something"). Then the narrator winks and pokes an elbow into the reader's ribs by abruptly changing the subject or falling into free association. The narration must have been a challenge for Janusch to translate without changing its flavor, and whether you find it entertaining or think it gets old or in the way of the story will determine in large part whether you like this 176-page book. The story begins at Löschenkohl's Grill, a restaurant catering to day trippers in the sleepy town of Klöch, East Styria, Austria. It is famous for its crispy fried chicken; in a good week, the restaurant serves 10,000 chickens. That translates into four tons of bones, pulverized in the basement bone grinder by former Yugoslovian soccer player Goran Milovanovic. In 1995, Milo made a gruesome discovery: among the chicken bones was the femur of a middle-aged man. Unlike the health inspectors, who always found something, the police were unable to identify either victim or perpetrator. Later, renowned Styrian artist Gottfried Horvath disappeared.

Today, private eye Simon Brenner arrives at the urgent request of the restaurant manager, old man Löschenkohl's daughter-in-law, Angelika, but she's nowhere to be seen. It's not unusual for Angelika to leave her husband Paul for a few days, but Paul insists Brenner find her. Brenner moves into a room up in the attic, next door to the cheerful waitress, who only eats frankfurters. More disappearances and the appearance of a severed head in a bag of soccer balls prod Brenner to stop contemplating his long-gone fiancée's incessant chicken-eating and "huge rack" (surely, the result of eating hormone-fed chickens) and focus on his investigation.

Brenner is an unassuming and appealing character, a lonely ex-cop whose favorite technique is to sound people out by not asking them follow-up questions. His thoughts readily stray from the case to the wife of a former police colleague, the time he went to a whorehouse on business, the music and games of his youth. For a book of under 200 pages, there are quite a few characters, but I didn't have problems keeping them straight. Their activities—disappearances, soccer, travel by bus and car, creating and collecting art—provide plenty of grist for Brenner and that deadpan, omniscient narrator. The action takes place in a surrealistic haze until it breaks out to run helter skelter across the finish line.

Austrian writer Haas's award-winning Simon Brenner books are very popular in Europe and have been made into three German films. It appears as if the seven-book German-language series is being translated willy-nilly like those of Jo Nesbø and Nele Neuhaus, but Melville International Crime is working to bring out the entire series. The most recent book, Brenner and God, is the first English translation. The Bone Man is second in the series, and second to be translated. It can stand alone in its wackiness, and you'll either get a kick out of it, like I did, or you won't. I recommend it to readers who enjoy quirky crime fiction, black humor, and digressive narration.

Note: I received a free review copy of The Bone Man, published by Melville International Crime, in March 2013. Posted by Georgette Spelvin at 10:50 AM