Activism in the 1970s brought us Earth Day, a day to celebrate and appreciate our planet. In the USA, it is today, April 22. The Free Love era also brought us sit-ins and love-ins, but even then I was more interested in the where- and why-fors of how victims got done in.

If you would like to read about murderous sit-ins, grab Catherine Aird's Parting Breath, in which a local university student would have lived longer had he avoided the protest and stayed home.

On the other hand, if you want to celebrate Mother Nature in an armchair sort of way, over the years there has been an explosion of mystery books that use the environment and other ecological concerns as backdrops for crimes that upset the balance of nature. 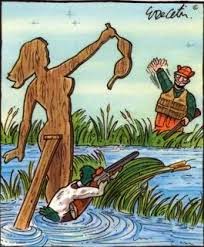 What makes for a good story is conflict, and there is certainly many a disagreement between the Green Peacers, the tree huggers, the loggers, the conservationists, the farmers, the hunters, the fishermen and the environment. One of my favorite authors, Tony Hillerman, set his Navajo series in the Southwest, and he used environmental themes as a basis for intricate plots. His eighth novel, A Thief of Time, was published in 1988. In it, he makes the point that the ability to understand the past is lost when anthropological sites are destroyed. While his mysteries are always intriguing, it is his settings that leave a lasting memory. In fact, one way to really enjoy a Hillerman book is to have by your side a photographic companion volume with pictures taken by Tony's brother, Barney Hillerman. It's titled Hillerman Country. 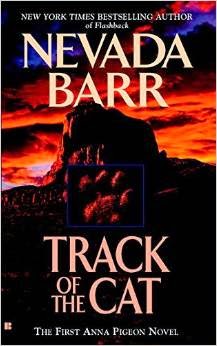 Another series, which highlights some of the best and most beautiful ecological gems in this country, is the Nevada Barr series featuring park ranger Anna Pigeon. Anna has 18 cases to her credit, as she has solved crimes set in different United States National Parks, from Carlsbad Caverns in New Mexico to Isle Royale in Michigan.

Track of the Cat, the 1993 novel that introduces Anna, is set in the Guadeloupe Mountains of Texas. Author Nevada Barr draws from her own experiences as a park ranger, and she always leaves the reader better informed about nature in its many guises.

Many writers have followed in Barr's footsteps. Dana Stabenow writes about Alaska, Sandra Brannan writes about South Dakota, Suzanne Arruda about Africa, Sandi Ault about northern New Mexico, and Sarah Andrews about Wyoming. In these series, there is a wealth of clashes between humans and the environment to stimulate the imagination.

Wildlife conservation is the theme of Jessica Speart's 1997 novel, Gator Aide, and she showcases different endangered species in each book of her series. Her protagonist, one–time actress Rachel Porter, leaves New York to become a US Fish and Wildlife agent. Before she realizes it, she is chasing down poachers in the Louisiana Bayous or looking for endangered tortoises in the desert. These books are fun.

Many writers have tackled environmental issues from a birdwatcher's perspective. I seem to be drawn to these twitchers, as they are called. Ann Cleeves's latest books are set in areas well known for their bird populations, such as Northumberland and the Shetland Islands. But her first books recount the birding adventures of George Palmer-Jones, an amateur birder who always finds himself involved in murders. Even twitchers can resort to violence when avian habitats are endangered. Palmer-Jones birds in Surrey, England. These early books are hard to come by, but worth looking for.

Christine Goff wrote a series of birdwatcher mysteries set in the Rocky Mountains. The series begins with A Rant of Ravens, and all books focus on the environment and the concerns of the aviary population.

Clearing out some books recently, I was re-attracted to J. S. Borthwick's The Case of the Hook-Billed Kites, which is about birding and crime in Central Texas. I enjoyed the re-read and passed the book on.

When it comes to the piscatorial denizens of the lakes and rivers, look to Victoria Houston for a good fish story. Chief of Police Lewellyn Ferris and her pal, Paul ("Doc") Osborne, are ardent environmentalists in Loon Lake, Wisconsin. They love the art of fly-fishing, which seems to lead them to dead bodies.

Glyn Carr's novels explore the beauties of nature in the thin air. His protagonist, Sir Abercrombie ("Filthy") Lewker, solves tricky crimes of the locked-room variety that come to pass in the difficult terrains of mountains from the Alps to Wales.

Mary Daheim also takes the high road and pits her newspaper owner and editor, Emma Lord, against California land developers who want to change a mountain into a luxury spa in The Alpine Gamble. There is no end to the havoc that ensues when tempers flare.

Take your pick, choose a side, and take a stance on global warming.

Better yet, just go outside today. Take a deep breath and walk a ways while you are deciding what your next literary adventure will be. If it has an ecological theme, let us know about it.

Posted by Maltese Condor at 1:29 PM