I wish I could tell you that at the end of the day, I sit with a glass of sherry and read some improving literature. The fact is, though, that it's more likely to be a glass of beer (but a microbrew, so maybe that counts for something) and a crime drama on TV. Sure, I read plenty of books, but aside from history, I've pretty much abandoned improving books in favor of genre fiction, especially mysteries. Now that it's tax season, though, even that seems like too much work. I'd rather just let TV drama wash over me. 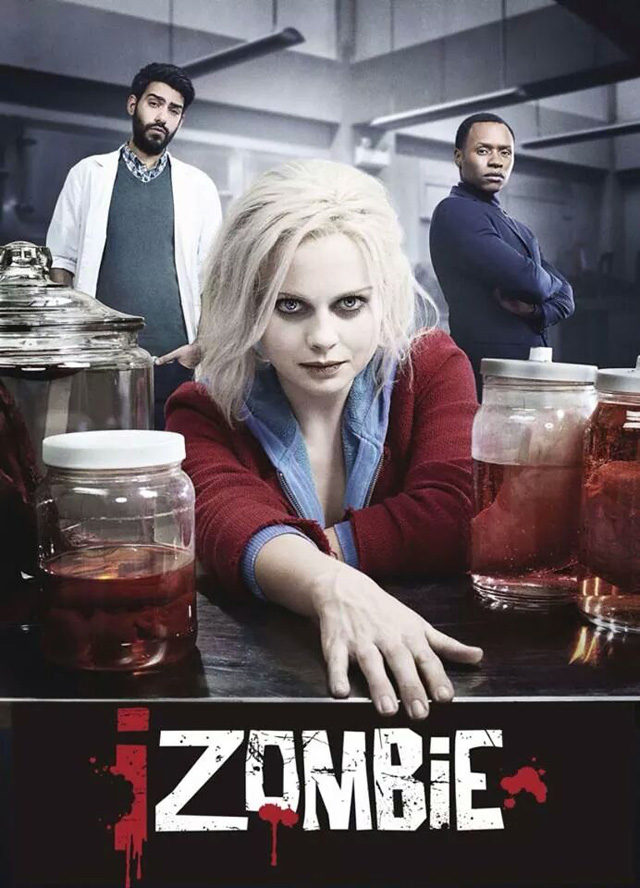 You already know what a complete fangirl I am for the late Veronica Mars. When I heard that its creative team, Rob Thomas and Diane Ruggiero, were venturing back into TV, I got excited. Then I heard it was to be a zombie show called iZombie. Yuck. I can't stand all that vampire/zombie/paranormal stuff. But I had to check it out, in spite of my aversion to that particular genre––and a fervent desire not to see anybody eating brains while I'm trying to digest my dinner.

It turns out that iZombie's protagonist, Liv Moore (played by Rose McIver), is basically a more grownup––and undead––Veronica Mars. Same snarky voiceover, same petite blonde pitbull attitude, same dark cloud following her around. The whole zombie thing keeps me from being totally in love with it, but I like it and it's on my DVR series queue.

The show begins with Liv as a smart and talented medical intern in Seattle who decides to take a night off to go to a party on a boat, at the urging of one of her intern colleagues. Liv isn't enjoying the party much and is about to leave when all hell breaks loose with people screaming, running, the boat on fire, you name it. Some guy attacks Liv and the next thing you know, she's waking up in a body bag on the beach and freaking out the one witness who sees her emerge from the body bag and stumble away.

It takes Liv a little while to realize that she's a zombie––though the pallor, circles around the eyes, strawlike hair and sudden craving for brains (with sriracha sauce, please; this is the 20-teens, after all) give it away. She switches to working in the Seattle PD morgue so that she doesn't have to kill anybody to access their gray matter. Her boss there, Dr. Ravi Chakrabarti, is the one person who figures out her secret and decides to figure out if he can cure zombie-ism. (That would look pretty good on a CV, right?)

Liv finds that when she eats a corpse's brains, the person's thoughts, feelings and attitudes flood into her consciousness, including, in some cases brief flashes of their murders. She wants to help the police solve the murder cases, but she can hardly tell them how she comes across her knowledge, so she claims to be a psychic. She ends up working with another snark-meister, Detective Clive Babinaux. Their relationship is the most frequent source of the show's smartarse repartée. 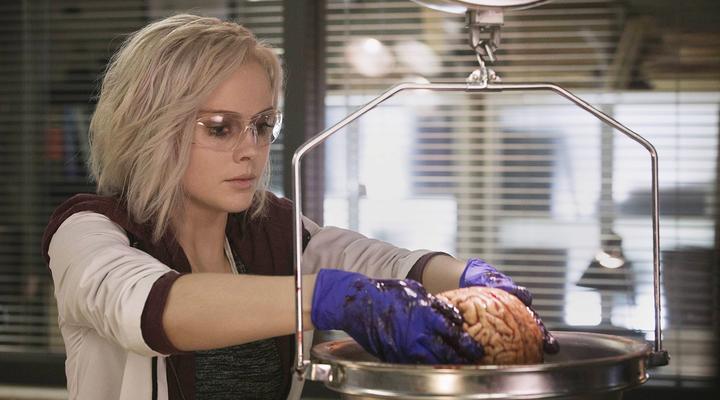 Rounding out the main cast is Liv's society matron mother, her best friend and roommate, and her former fiancé, Major Lilywhite (seriously, that's the character's name), whom she felt she had to break up with out of a fear that some evening she might be overcome by a desire to crack his head open and feast. No drama is complete without a nemesis, and Liv's is another zombie, Blaine DeBeers. Blaine has none of Liv's scruples about getting ahold of brains only from the already dead, and he's quickly turning into the creator of a Seattle zombie subculture. His clashes with Liv are another source of some very entertaining dialog.

If you enjoyed Veronica Mars or you're into the whole vampire/zombie thing, check out iZombie. It's on the CW network on Tuesdays at 9pm Eastern. Catch up on past episodes on the CW site, here.

I need to digress for just a minute. Did you know there is actually a book of scholarly essays about the Veronica Mars TV show? Well, there is. It's titled Investigating Veronica Mars: Essays on the Teen Detective Series (McFarland, 2011). Here's its description:


During the course of its three seasons, Veronica Mars captured the attention of fans and academics alike. The 12 scholarly essays in this collection examine the show's most compelling elements. Topics covered include vintage television, the search for the mother, fatherhood, the show's connection to classical Greek paradigms, the anti-hero's journey, rape narrative and meaning, and television fandom. Collectively, these essays reveal how a teen television show––equal parts noir, romance, social realism and father-daughter drama––became a worthy subject for scholarly study.

I don't feel compelled to read it, but this makes me feel a little less weird about being an AARP-eligible VM fan. Did you watch the drama Fortitude that I previewed here? Thursday night was the season finale and all I can say is that this was one very weird Nordic police procedural, what with people being turned into murder machines by prehistoric insects crawling back to life out of mammoth corpses that had become exposed because of climate change. The plot is, needless to say, a little on the crazy side, and its strands are complicated (check out this infographic), but it is still compelling to watch, because of the intensity of the acting and its outstanding cast.

The big names, Michael Gambon and Stanley Tucci, are as good as you'd expect, but the lesser-known actors really grab attention, especially Richard Dormer as Sheriff Dan Anderssen. The sheriff is superficially a bit of a brute, but with a whole lot more going on under that surface. If you want to get more information about Fortitude and see some videos, head over here. I was surprised to hear that despite the show's body count, there will be a second season. I'll be watching.

I will confess to you that from 2003-2008, one of my real guilty pleasures in TV watching was Las Vegas, a show set in the fictional Montecito resort and casino, which focused on the Montecito's security and other operational personnel. The cast included James Caan, as head of operations, and his principal security officer, Danny McCoy, played by Josh Duhamel.

Josh Duhamel is back in a new police procedural called Battle Creek. Surprise, it's set in Battle Creek, Michigan. Local police detective Russ Agnew (played by Dean Winters) is a hangdog, rumpled mess and could win awards for cynicism. Agnew is perennially disgruntled by the department's lack of funding and, as he sees it, respect. As the show begins, he feels even more put upon than usual when the FBI sets up across the hall and the impossibly handsome and charismatic Agent Milt Chamberlain (honestly, what is with these character names?), played by Duhamel, is assigned to be the new liaison between the FBI and local law enforcement. In other words, Milt is now Russ's extremely unwanted partner.

The dynamic between the partners is entertaining, and we're still not sure we've been given the real reason why Milt is in Battle Creek, rather than off in some less backwater-ish city and quickly climbing up the ranks. The other cast members are fun to watch too. The great English actress, Janet McTeer, plays Commander Guziewicz, and you'll recognize Kal Penn from the West Wing as Detective White.

The crime-of-the-week plots are decent. They had this Mainer at the second episode, which featured a death-by-maple-syrup murder. The most recent episode did fall into the old the-recognizable-guest-star-dunnit trap (see How to Watch TV Crime Dramas if you want to know my formulas). As soon as my husband and I saw Peter Jacobson, who used to play Dr. Taub on House, we knew he'd be the perp; it was just a question of how and why. Still, it was an entertaining way to spend an hour. If you'd like to give it a try, it's on CBS on Sunday nights at 10pm Eastern. Here's the most important thing: this coming Sunday, the guest star is Candice Bergen––and she's playing a con artist!

By the way, speaking of exceptions to the recognizable-guest-star-dunnit rule, when we watched Bones on Thursday night (yeah, yeah, yeah, that's a lot of TV watching), we spotted Jason Gray-Stanford, who used to play Lt. Randy Disher on Monk. Well, obviously, he was going to be the killer, right? But Bones pulled a fast one and didn't follow convention this time. I have to tell you, though, their killer wasn't believable. They should have followed the formula!  (UPDATE––WITH A SPOILER: A month later, Bones revisited the serial killer case in that episode, and Randy Disher turned out to be the killer after all. The formula wins again!)