Book Review of Laura Childs's Postcards from the Dead

Postcards from the Dead by
Laura Childs

Every few years, I get a chance to take a trip to the Crescent City at the mouth of the Mississippi. You can call it The Big Easy or one of the country's murder capitals; it all depends on your point of view. Only one time was I there near Mardi Gras and I was entranced by the parades, the excitement, and, of course, the flying beads. Some of these are actually beads to die for if you should dare to cross a barricade. You won’t get run over, because the New Orleans Police Department puts up with nothing when it comes to disrupting a float!

But it was an event to remember and I still have some of the mementos. 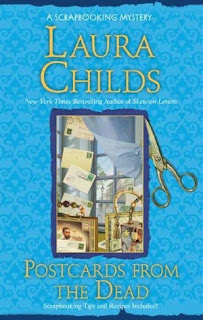 Postcards from the Dead, by Laura Childs, evokes some of these memories with her scrapbooking series that takes place in the French Quarter.

Carmela Bertrand finds herself packed into an elegant, but aging, suite in a New Orleans French Quarter hotel. She is the owner of Memory Mine, a scrapbooking shop located on a nearby street. There is an excited buzz among all the people crowded into this room, because the countdown for Mardi Gras is on and the denizens of New Orleans are all shaking off their shackles and getting ready to "laissez les bon temps rouler." Outside, the sound of a passing parade is deafening.

Carmela is approaching her thirties, and is making a life for herself after a divorce from a husband who is one of the NOLA elite. In her married days, Carmela lived in a large house in the famed, beautiful Garden District. Now she has a small apartment, with a faithful mutt to keep her company and loyal friends who care for her. She is present at this gathering because she is one of several people who is to be interviewed by a not-so-friendly newscaster, Kimber Breeze. 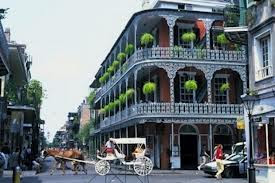 Carmela is waiting her turn with Kimber, who is out on a balcony that overlooks one of the many parades filling the street in the days leading up to Shrove Tuesday. Carmela is talking to one of the cameramen, who is having trouble eliciting a response from Kimber. Carmela dashes out to the balcony to confront a gruesome sight. Drunken revelers? No, much worse, and she is too late to help Kimber. The potential witnesses find every way out of the room, as well as out of the hotel, and leave Carmela and her friend Ava to talk to the police.

Early the next morning, on top of the newspaper at her door, Carmela finds a postcard that seemingly comes from Kimber. Carmela is a little freaked out when she later gets another that has been left on her desk at the shop. Someone knows where she lives and works, and though she feels threatened, Carmela can't really convince herself she should report this. 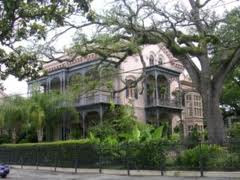 There are those who think the police are all right in their place, and Carmela is one of them––as a matter of fact, she dates a homicide detective. But when it comes to sleuthing, the amateur seems to have the edge, since she is closer to real clues, the background information, and the gossip that may contain the key to a murder. Detective Babcock of the NOPD, as a professional investigator, not to mention as Carmela's boyfriend, takes the stance that Carmela should stick to her own job. But Carmela does have an entrée into some of the exclusive social venues where some of the key suspects will be present.

As a matter of fact, Memory Mine is extremely busy as N'awlins is a party town––particularly during this season of celebration. All kinds of ideas for place cards, invitations, and table decorations are being brought to the shop, to be produced in the traditional Mardi Gras colors. These are purple for justice, gold for power and green for faith. I must admit that listening to the descriptions of the stock in this store, including all kinds of exotic papers, unusual stamps and many other little bits, stirred my creative juices––such as they are. 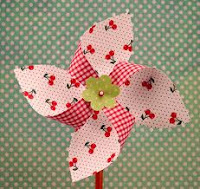 What I liked about Carmela was that she is very down to earth; not quirky at all. She dresses conservatively and behaves much like most 20-something women. Although she runs a shop, she is able to pursue her investigation without distractions like frenetically trying to run errands, do housework and shop. Descriptions of sidetracks like these exhaust me as a reader. 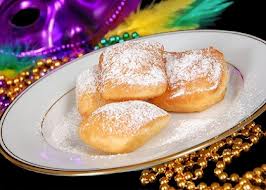 She does have some lively friends and co-workers, who provide the quirk and there were a few times when I thought that with friends like these, who needs enemies? But they do provide a balance, for, as Ava ripostes when Carmela tells her she worries too much: "sometimes you don’t worry enough." 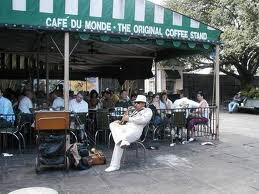 My main concern with Carmela is that once she went into the Café du Monde and came out with coffee but no beignets! She redeemed herself another time by buying some but ate only one. This suggests a woman with great control. This is a woman to emulate, but I probably won't the next time I visit the Café du Monde.

Childs presents The City That Care Forgot in a very inviting way. I was drawn to the characters and would like to read more about them. I will be reading the omnibus that introduces these protagonists in the near future. Maybe there I'll learn Babcock's first name.

I wonder if any city has as many nicknames as New Orleans. I can't leave out two others: "Chocolate City" and, for reasons I don't want to contemplate, "Chopper City," referring to AK-47 weapons. Readers, any more?

Note: I received a free review copy of Postcards from the Dead, tenth book in the Scrapbooking Mysteries series, published earlier this month by Berkley Prime Crime/Penguin Group (USA).
Posted by Maltese Condor at 4:00 AM