Cover of Snow by Jenny Milchman

When Nora Hamilton wakes muzzily one January morning in the charming old house that belongs to her husband Brendan's beloved Aunt Jean, she realizes she is alone––and late. Has Brendan left for work already without waking her? He knows she had an early appointment with a new client for her fledgling home renovation business! After wandering through the house calling for him, she impulsively opens the door to the back servants' stairwell that she has been painstakingly refinishing. Brendan is hanging from the light fixture at the top of the stairwell, his head at an odd angle and his face bright red. As Nora stares, stupified, the light fixture gives way and plaster, lathe, and her hours-dead husband fall on her hapless head. 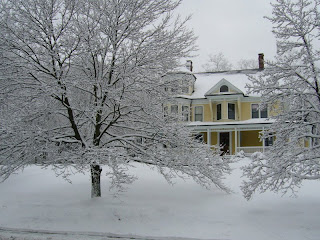 Club Mitchell, Brendan's partner in the Wedeskyull, New York police force, is first to arrive, followed closely by Nora's parents and sister. The funeral is very well attended (Brendan was a native and second-generation town policeman), but even sympathetic Chief Vern Weathers seems disinclined to suspect that Brendan's death was anything but a suicide, despite Nora's certainty that he must have been murdered. Their life together was happy and full. How could he have made passionate love to her and then hanged himself after she fell asleep? And how could she not have heard him fumbling in the stairwell?

When her sister Teggie finds the glass Nora had drunk from on the fatal night with a powdery residue at the bottom and asks some hard questions, Nora begins to realize just how little she knows about Brendan's life in the old town before their marriage. His mother Eileen, who has never showed anything but dislike for her only son and contempt for Nora, is disinclined to discuss him. Aunt Jean, his only other living relative, is evasive when questioned about Brendan's childhood. As Nora tries to dig into her husband's life, the old town closes ranks against her, and she is stonewalled at every turn. Even the police chief and Brendan's partner, Club, strongly encourage her to go home to her family for awhile.

Dugger Mackenzie, a profoundly autistic local, is the only native willing to help, but he can speak only in frequently incomprehensible rhymes. While locals discount him as feeble-minded, Dugger is fascinated with the speech he can't quite master, so has been secretly taping residents' conversations for years.

Nora finds another, and unexpected, ally in Ned Kramer, a newspaper reporter who recently moved into the area. He is the client she missed an appointment with the morning after Brendan's death. Together, they peel away layer after layer of secrecy, only to find deeper ones ahead of them. And someone is willing to drive them out of town or kill, if necessary, to keep those secrets buried.

Cover of Snow is the author's debut novel. I had previously read one of her her short stories, "The Very Old Man," in an ebook called Lunch Reads Volume 1, and was so impressed with the mood of growing unease and uncertainty in the short story that I grabbed this novel when it was offered for review. Like the story, the novel is a low-key tale in which seemingly reasonable events and mishaps ratchet up subtly, but relentlessly, until the reader can't always be quite sure what is real threat and what is simply an interpretation of random events by the distressed Nora. It has elements of both mystery and horror. Not horror in any supernatural sense, but in the slow deadly tightening of events as Nora delves into––and blows wide open––the town's ugly secrets in her quest for answers. Nora's story is told in the first person, while the town's history is recounted in the third-person omniscient, which sometimes makes Nora appear a little slow to catch on. While the novel drags a bit in spots, it is overall a very satisfactory first effort, and I look forward to more from the author.

Note: I received a free review copy of Cover of Snow, which will be released by Ballantine Books on January 15, 2013. Versions of this review may appear on various review sites under my user names there.
Posted by Periphera at 4:00 AM