Book Review of Madeline Miller's The Song of Achilles 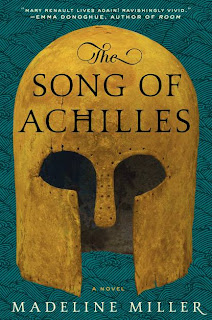 The Song of Achilles
by Madeline Miller

Our guest reviewer today is Judith Starkston, who writes historical fiction and mysteries set in the period of the Trojan War. Judith is currently seeking representation for her manuscript Hand Full of Fire. "In the midst of the mythic Trojan War, Briseis, healing priestess and strong-willed princess, driven by unspeakable grief, raises a sword against Achilles, mightiest of Greek warriors, igniting a passion that seals his fate and changes her destiny."

This review of The Song of Achilles was first posted on Judith's website www.judithstarkston.com. Judith also reviews for Historical Novel Review.

Madeline Miller says the idea for her novel The Song of Achilles arose from wondering about the extremity of grief Achilles suffers when his closest friend Patroclus dies in the ancient Homeric poem the Iliad. What kind of relationship did they have that Achilles loved Patroclus that much? She answers that question with depth and sensitivity. The novel focuses primarily on the theme of the human capacity to love. In Miller's interpretation, the gods, and most especially Thetis, Achilles's mother, don’t understand love, and thus being half-god as Achilles is, sets him up for some complicated trouble in matters of the heart. Told from the point of view of Patroclus, The Song of Achilles is a graceful new exploration of the ancient tale, taking you inside these two heroes in a compelling way.

As in the Iliad, from which Miller has drawn the beginnings of her characters, Achilles loves his friend Patroclus with profound intensity, but in Miller’s take, this love blocks out everyone else in Achilles's view. The half-divine hero seems to have no capacity to love anyone else, not even other friends. Gone are the loyalties and bonds with his fellow warriors that Homer portrays. He doesn’t understand how Patroclus knows and holds in affection many of the men and women they live with and fight for each day, including, interestingly enough, Briseis, the woman over whom Achilles will quarrel with Agamemnon. Achilles notes he doesn't even recognize most of these people. Even as a boy in his father's court in Phthia, Achilles does not connect with the other boys with whom he eats and plays each day. "But in all those years, Achilles showed no interest in any of the boys, though he was polite to them all, as befitted his upbringing. And now he had bestowed the long-awaited honor upon the most unlikely of us, small and ungrateful and probably cursed." And why does he bestow his singular affection on Patroclus? Because, Achilles says, "He is surprising." No one else finds Patroclus the least bit lovable, at least not until several years into the Trojan War, by which time Patroclus has won many friends through his work in the tent where the wounded are brought and through his kindness to Achilles's women captives. Since he doesn't want sex from the women, nor does Achilles, being kind to them is greatly simplified. One of Miller's conscious choices has been to make the relationship between Achilles and Patroclus entirely exclusive. No captive women appear in the beds of Achilles and Patroclus, as they do in the Iliad.

The novel starts with Patroclus's early childhood. His father is disappointed in him almost from the beginning, and his mother is a simpleton, as far an opposite of Achilles's mother as Miller can portray. When Patroclus accidently kills another boy, his father's biggest disappointment is that he doesn't have the sense to lie about it, and his father doesn't seem overly upset by the need to permanently exile his son. This early emotional deprivation forms Patroclus into a man who will accept Achilles's odd friendship that grows eventually into love—anything to be accepted, especially by someone so extraordinary.

Although Peleus, Achilles's father, shows warm affection and tolerance for his son, Achilles's mother, the goddess Thetis, is clearly the source of the "deficient at love" trait in her son. Miller's Thetis is hard and cold and frightening. Later she will understand that discounting love deprives life, even immortal life, of meaning, but that's much later when it can do no human good. We learn early on that she hates her mortal husband Peleus. Her single ability to love is directed at her son and even that is never intimate or sweetly maternal.

As soon as the relationship between Achilles and Patroclus develops into one of physical love, Thetis appears and makes it clear she despises Patroclus and her son's love for him. At one point Thetis will trap her son into lying with a woman "because of you," Achilles says to Patroclus. Thetis's hatred for Patroclus carries Miller's plot forward in some essential ways and contrasts effectively with the redeeming nature of their relationship, and that may be why she has developed this divine distaste for the love between two men. But it strikes me as an anachronism, and it's an ugly one I'd prefer didn’t leak backwards into time where it didn't exist. Since the main point seems to be, I think, that Thetis doesn't understand love, why play up so strongly her distaste for male love in particular? Greek mythology is full of male unions (Zeus and Ganymede, Heracles and Jason, Poseidon and Pelops, Dionysus and Adonis to name a few) and Thetis's virulent hatred arising directly from the physical relationship seems unnecessary and historically unwarranted. It's true that in the Iliad Thetis reminds her son after Patroclus's death that "It is a good thing to lie with a woman in love." But she also reminds him it's a good thing to eat and drink. She means, it's a good thing to enjoy life while you can and besides, in the Iliad, Achilles often sleeps with women, so her suggestion is not tinged with criticism as the same statement would be in Miller's novel. (If anyone’s interested in a scholarly discussion of this issue in the Mycenaean context, read the first chapter of Eva Cantarella’s Bisexuality in the Ancient World). The early indication of Patroclus's innate honesty (when he fails to lie about the death he's caused), while a disappointment to his father, is essential to the novel. Patroclus's virtues don't coincide with his father's or Thetis's ideas of heroic attributes—or even his own at first—but he turns out to be the best of the Greeks in Miller's rendering because of his moral sensibilities and his capacity to love. Being best at slaughtering Trojans does not define Miller's Aristos Achaion, "Best of the Greeks," although that is how the phrase is understood among Achilles's fellow warriors. Achilles, for all the intensity of his love for Patroclus, is deficient in these gentler virtues because he cannot connect to anyone but Patroclus. The direness of Achilles's sorrow when Patroclus dies appears to spring from this failing. There can be nothing or no one to replace the hole left by this loss.

Miller has a unique solution, arising from this crippled nature of Achilles in the area of love, to two questions the Iliad asks: why Achilles allows Agamemnon to take Briseis away without a fight and why he chooses to stay out of the fight, even while so many of his fellow Greeks die as a result. Her answers provide a surprising moment. I won't spoil the shock by revealing it, but it will grab you whether the Iliad's an old friend or you've never read it. Suffice to say, Patroclus does not share this crippling, narrowed focus of love, and this lifts him into Miller's new definition of the best hero.

Miller has made a superb offering in the tradition of redefining the Homeric hero. It's an old project dating back to the Iliad itself. Achilles says in Book Nine (here in Lombardo's translation), "It doesn’t matter if you stay in camp or fight—In the end, everybody comes out the same. Coward and hero get the same reward: You die whether you slack off or work. And what do I have for all my suffering?" His comrades on the field beg to differ. They are quite sure fighting for loot and glory is well worth the suffering—the Mycenaean definition of a hero. I am fascinated by Miller's reinterpretation of Achilles and Patroclus and the Homeric tradition. She tells an engaging, emotionally gripping tale.

Miller, who is clearly knowledgeable about Greek history and archaeology, has chosen to float the tale in a mythological world much as the Homeric tradition did, with heroic details of armor and ship, but not much detail of daily life as it occurred in that place and time as we have recently reconstructed it. The Song of Achilles has vivid descriptions. Chiron's cave, for instance: "In front of us was a cave. But to call it that is to demean it, for it was not made of dark stone, but pale rose quartz." This is a magical place, and we enter it, as the two young men do, with wonder and awe. And of course Miller builds Troy for her readers. "Back in the main camp, we stood on the hill that marked the boundary between sand and grass, and regarded the thing we had come for. Troy. It was separated from us by a flat expanse of grass and framed by two wide, lazy rivers. Even so far away, its stone walls caught the sharp sun and gleamed. We fancied we could see the metallic glint of the famous Scaean gate, its brazen hinges said to be tall as a man. Later, I would see those walls up close, their sharp squared stones perfectly cut and fitted against each other, the work of the god Apollo, it was said. And I would wonder at them—at how, ever, the city could be taken." These descriptions paint brilliant images—Miller's especially good at her descriptions of nature—but they are more mythological than archaeological. The Song of Achilles takes the reader on a thoroughly enjoyable voyage into the legendary world of these heroes.
Posted by Material Witnesses at 4:00 AM