Breaking the Law for Labor Day

It's Labor Day. Kudos to the folks who decided the best way to celebrate American workers is to give them the day off. It's summer sales or a last trip to the lake. Tomorrow we say goodbye to beach reads and hello to books for fireside reading.

In honor of Labor Day, I've assembled some books whose characters work hard at breaking or upholding the law and flouting all sorts of workplace rules. These books will help you transition from the porch swing to the living room's upholstered chair. 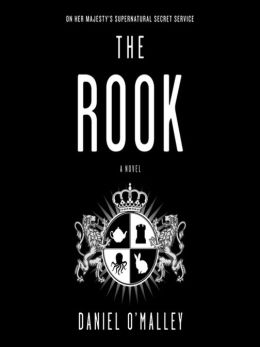 Don't turn up your nose when you see "On Her Majesty's Supernatural Secret Service" on the cover of Australian Daniel O'Malley's The Rook (2012, Little, Brown and Co.). Don't you like Men in Black and Doctor Who?

The book begins when a woman wakes up on a London park bench. She's bloody and bruised and has no memory. Surrounding her are twitching corpses wearing latex gloves. In her pocket are several letters addressed to "You," one of which begins "The body you are wearing used to be mine." From the letters she learns the following: her name is Myfanwy (sounds like Tiffany) Thomas, she wrote the letters to herself because she suspected she was in danger and she's high up (a rook) in the Checquy Group, a secret agency that guards unsuspecting Britain from supernatural forces. Oh, yeah, and an unknown someone at work is trying to kill her. (This is counter to American workplace laws but the Checquy Group is a British agency so perhaps murder is allowed––if attempted politely.)

The Rook, first in a new series called the Checquy Files, is an entertaining hybrid of thriller, Monty Python's Flying Circus, X-Files and The Bourne Identity. Now I've got movies and TV shows on the brain in addition to books. If you took Don Winslow's Savages and crossed it with a relentless chase movie, such as No Country for Old Men or Jaws (if a land shark rather than an ocean-going shark were pursued), you'd get James Carlos Blake's The Rules of Wolfe: A Border Noir (July 2013, Mysterious Press), sequel to last year's Country of the Bad Wolfes.

That book describes a Texas family's gunrunning and smuggling operations history but now we move to the present to find Eddie Gato Wolfe too impatient to earn the college degree necessary to join the family business. He heads south and winds up with a security job for a violent Mexican drug cartel run by La Navaja. Breaking a universal workplace rule, Eddie goes to bed with Miranda, the girlfriend of his employer's brother, El Segundo. Making it worse, when El Segundo discovers them, Eddie kills him. It's time for Eddie and Miranda to hotfoot it outta there into the Sonoran desert with La Navaja's men panting after them. The only question is which will kill them first: the desert or the chasers. Very vivid writing. 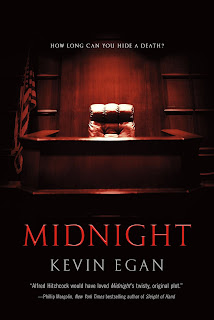 In that movie, a lot of wild scrambling takes place at Consolidated Companies. In Midnight, New Year's Eve provokes scrambling in the courthouse offices of Manhattan Judge Alvin Canter. That's because Canter died of a heart attack in the morning of December 31st. Had he died after midnight, paychecks for law clerk Tom Carroway and secretary Carol Scilingo would have continued, because an administrative rule dictates they will serve out the remainder of the calendar year. Naturally, both of them really need the money. All they need to do is conceal the judge's death until the following day.

A desire to stay employed by getting around a quirky rule leads to excruciating desperation as one thing after another goes wrong. Beautiful use of courthouse setting. Riveting isn't a strong enough word.

Posted by Della Streetwise at 8:52 AM