Review of Jean-Patrick Manchette's The Mad and the Bad

The Mad and the Bad by Jean-Patrick Manchette

I just finished a real binge of history reading and am finally back to mysteries. My first mystery read in about a month was a very forgettable old Golden Age mystery. The less said about that the better.

But then it was on to Jean-Patrick Manchette's The Mad and the Bad. Manchette, who died in 1995 when he was only in his early 50s, was said to have saved French crime fiction from the then-dominant fusty and formulaic police procedurals. Manchette's style is spare, violent noir.

All of Manchette's books that are available in English are about contract killers. In Three to Kill, Georges Gerfaut, a company executive with a dull work and family life, witnesses a murder and is then pursued by the assassins. Georges decides to turn the tables on them––and his life. In The Prone Gunman, Martin Terrier is a hired gun who's had enough. He wants to retire, go back home with his savings and marry his old love. Be careful what you wish for.

I read Three to Kill and The Prone Gunman years ago. I was excited to see that New York Review Books was coming out with The Mad and the Bad (2014; translated from the French by Donald Nicholson-Smith). This was one of Manchette's earliest novels, and is doesn't have quite the spare, searing style of the later novels, but it'll do.

Julie is a young woman who's been living in a country estate home for the mentally ill for the last five years. As the novel opens, a limo comes up the long drive to the estate, and the redheaded Michael Hartog emerges. He's come to pick up Julie and take her to London, where she will be the latest in a line of nannies for Hartog's young orphaned nephew, Peter.

Why in the world would Hartog hire Julie? It's not a mystery. We quickly learn that Hartog has hired an English hitman, Thompson, to kill Peter and Julie, and make it look like an insane Julie has done the deeds. Why Hartog wants to do this is not explained; I suppose it must be because Hartog's vast wealth all comes from Peter's parents, who were killed in an accident, and Hartog doesn't want Peter to get any of it.

Manchette doesn't explain the "why" of the plot because he only has 163 pages to get right into some of the wildest, goriest, and just flat-out crazy action ever in a thriller. Thompson seems an odd choice for a contract killer. He is practically crippled by a bleeding ulcer and seems at least a soupçon more unhinged than Julie. He has also hired a pair of colleagues whom no discerning contract killer would want as associates. But it's all grist for this hallucinogenic swirl of violence.

The Mad and the Bad isn't as good as either Three to Kill or The Prone Gunman, but it was a wild ride and nothing like anything else I've read this year––or expect to read anytime soon.

I want to mention one other thing about this NYRB edition of The Mad and the Bad, and that is its introduction by crime writer James Sallis, who is probably best known for his Lew Griffin series. This introduction reminded me of a story from college that a classmate told me. He was in a literature class, with the students and teacher in an intense discussion of the symbolism and deep meaning of Moby Dick. But then one guy, Mike, commented that he thought it was just a simple sea story. That probably sounds like a complete non sequitur, but stay with me. 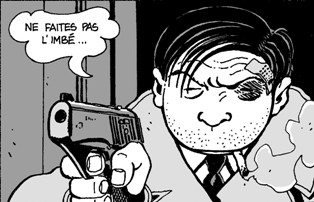 In the introduction, Sallis writes:

Manchette's profoundly leftist, distinctly European stance may be something of a problem for American readers. Like many of his generation, Manchette was influenced by the Situationist Guy Debord, whose theories, elaborated in The Society of the Spectacle, were everywhere during France's 1968 insurrections. Situationists held that capitalism's overweening successes came only at the expense of increased alienation, social dysfunction, and a general degradation of daily life; that the acquisition, exchange, and consumption of commodities had forcefully supplanted direct experience, creating a kind of life by proxy; and that liberation might be found in fashioning moments that reawakened authentic desires, a sense of adventure, a ransom from dailiness.

For Manchette the world is a giant marketplace in which gangs of thugs––be they leftist, reactionary, terrorist, police, or politicians––compete relentlessly; one in which tiny groups of individuals, "torn to pieces by the enemy and sodomized by [their] own leaders," stay afloat by clinging to the flotsam. In his work he alludes to and parodies literary writers such as Baudelaire and Stendhal, juxtaposes the vulgar and the precious, enjambs depictions of quotidian life against scenes of such extreme and often implicit violence as to call into question all the myriad fictions of bourgeois, accepted existence.


Well, alrighty then. I'm glad I only skimmed Sallis's intro before diving into the book, or I might have been too intimidated, thinking that I was going to be challenged by a revolutionary political and literary manifesto. Instead, I was like Mike and Moby Dick. He read a simple sea story and I read a graphic noir thriller. I didn't experience the levels of meaning Sallis did, but this bourgeois got all I wanted from the book.

Oh, and by the way, Happy Halloween!