Save Me From a Life of TBR

You know your TBR situation is bad when you have to organize the books you haven't gotten around to reading yet. I now have three TBR areas––not counting the pile of five books on the end table next to my living room chair.

In the living room––conveniently next to the liquor cabinet––there is a three-foot-long collection of books that I really, really expect to read in the next few months. To be honest, some books do get demoted from that collection to the den, where there are two bookcases of TBRs. One bookcase is for non-mystery books, and the other for mysteries. Most of the books on the mystery bookcase are ones that I picked up at used-book sales or bookstore closings.

I have to pass by the bookcases on my way to the laundry room, and the other day I took a good look. I resolved that one of those lonely mysteries should graduate to the living room, and maybe even to my end table. But which one?  I was able to narrow it down, but now I need help. I was an avid reader of the Rebus series, starting way back in the late 1980s. Then Rankin supposedly ended the series in 2007, with Exit Music, and I believed him. So much so that when Rankin's first Malcolm Fox novel, The Complaints, came out in 2009, I just felt like I was done and never picked it up. Three years later, along came a surprise new Rankin novel, Standing in Another Man's Grave, which also featured Fox. I had to read that one.

I picked up a copy of The Complaints at a book sale a couple of years ago and it has been sitting there on the shelf ever since, despite being a nice, barely-used hardcover. Should I give Malcolm his chance? Frankly, even though Rebus would try anybody's patience, Fox comes across as a real pill in Standing in Another Man's Grave. But I could be persuaded that his introduction is worth reading. 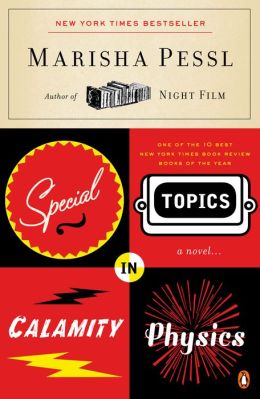 Book descriptions have a bad habit of over-promising, but this debut is described as Nabokov meets Donna Tartt. Well, that makes me pay attention. On the other hand––pretension alert!––the protagonist is named Blue van Meer. On the third hand, it's about a high school murder, and what survivor of high school doesn't want to read about that? I'm so confused!

This is another nice hardcover that I picked up at a used book sale. I have another problem with this book that's kept it on the shelf. People keep saying that Pessl's Night Film (2014) is a very good story. I want to read it, but even though both of her books are stand-alones I feel like I should read Special Topics in Calamity Physics (2007) first. It's not that I have some kind of OCD problem (honestly!), it's just that the book is there on the shelf, just waiting, and since it's the older of the two books, it seems only fair that it should be first.

Littell is a longtime and prolific espionage writer. His Young Philby fed my Kim Philby/Cambridge Spy Ring obsession, and The Company: A Novel of the CIA doorstop of a book managed to be both an espionage novel and multi-generational family history.

Littell's specialty is classic Cold War espionage, but he takes a little job with The Stalin Epigram (2009). As I'm sure you know, the Stalin era was no picnic. Anybody who didn't fall right into line with Stalin's harsh policies, like forced collectivization, could expect a show trial and banishment to Siberia––or worse. In the arts world, anybody who wanted his or her work published was expected to laud the big boss.

Renowned poet Osip Mandelstam refused to kowtow. He was horrified by Stalin and Stalinism, especially after he saw, from a train window, the results of collectivization. In 1933, he composed a 16-line poem and recited it to a circle of fellow artists. The results were just as you'd expect, and after he got the full treatment, including "internal exile," he died in 1939.

Littell takes this true-life history and holds it up to the light, allowing the story to be told by several different real and fictional characters, including his wife, his lover and the weightlifter/strongman who becomes his cellmate. I bought the book at a bookstore closing at least a couple of years ago, because I like Littell. I'm too much of a philistine for poetry, though, which I think is why the book has languished on that TBR bookcase ever since.

Can a philistine enjoy this one? What do you say?

This one hasn't aged on the shelf too long; I've had the UK edition for only a little over a year. This one is so up my alley I can't figure out why I haven't read it yet. Georg Heuser makes a name for himself in the Berlin police as the man responsible for capturing the S-Bahn serial killer. But the war comes along and he's part of an SS contingent sent to the east, called Ostland by the Germans. In Minsk, instead of catching serial killers, he becomes a key actor in the Nazis' mass killing machine.

Years later, a young German lawyer named Paula Siebert is going through recently-opened Soviet archives and discovers the horrors of Heuser's past in Ostland. Now Heuser and his SS comrades will go on trial. The narrative shows us how a "decent German" went from an enforcer of law and order to an institutional killer. This is a novel, but Georg Heuser was a very real person who went on trial in 1962 for his activities in Ostland.

This is embarrassing. I have no idea how long Tragedy At Law (1942) has been moldering on the TBR bookcase; just that it's been a long time. I don't even remember where or how I got it.

Cyril Hare (real name Alfred Gordon Clark) was a barrister who became a county court judge, the kind who traveled a circuit in the old days. In this Golden Age classic, Hare took advantage of his experience to create the pompous Judge Barber, who is traveling his circuit with his clerk and his striving wife, Hilda.

Judge Barber's career is put in jeopardy when he accidentally knocks down a pedestrian. Shortly after that, he receives threatening messages, is nearly killed by a box of poisoned chocolates, and worse. Hare liked to have his plots turn on tricky points of law, and this one is described as following that practice.

Cyril Law's An English Murder is one of my all-time favorite Golden Age mysteries, so why haven't I read this one yet? Could it be as simple as the fact that it's a battered old paperback? Can you tell me I shouldn't overlook this book because of its cover?

I'm ready for your advice. Which book should graduate? Let me know in comments or you can vote in the poll at the top right of the page.
Posted by Sister Mary Murderous at 4:00 AM