Working Our Way Into Fall

On the first Monday of September we celebrate Labor Day. It's a federal holiday in the United States, our day to thank American workers. We do this by relaxing our butts off with backyard barbecues or carpools to the park for soccer and baseball. We eat hamburgers and watermelon and drink beer or lemonade. We say so long to summer and gird our loins for the hard jobs of fall. Suffering when our favorite football team loses. Cleaning the rain gutters and stacking wood for the fireplace. Explaining trigonometry to our kids. Finding good books for nights that are becoming long and cold.

Today, I'm not only saluting my fellow American workers, I'm mentioning some of them in crime fiction.

Steve Ulfelder's Purgatory Chasm is a hardboiled paean to working off a debt, whether it's money owed, a verbal promise to a friend or a responsibility to family. The narrator protagonist, Conway Sax, was once a NASCAR driver but his drinking ended that career. At one time he owned his own car repair shop but a prison sentence for manslaughter shuttered it. Conway's out on parole and remodeling an old house he owns in Framingham, Massachusetts. He wants to sell it and use the proceeds to open an automotive garage.

Ten years ago, an Alcoholics Anonymous group called the Barnburners saved Conway's life. He pays them back by doing odd jobs or those that require "muscle." The inner circle of this group have become his friends. When one of them, Tander Phigg Jr. (at least his first name isn't Ripe or Fresh), asks for help, Conway agrees despite feeling that Phigg is one of those people who don't have to be drunk to be assholes. Phigg says he's paid $3500 in advance for the restoration of his 1980 Mercedes-Benz 450SEL 6.9. It's been in Das Motorenwerk for months and the owner is giving him the runaround. Phigg wants it back.

This is easier said than done, even for a tough man like Conway, who employs a tire iron across someone's knees as naturally as he uses it to change a flat. For his trouble, Conway receives a fist-sized lump on his head and finds Phigg dead.

Nobody can criticize Conway for being a quitter. He wants to keep his promise to Phigg, even though Phigg's in no position to complain if he doesn't. Conway also feels pressured to solve the mystery of Phigg's death, because his criminal record leaves him open to suspicion. Conway begins by researching Phigg's past. Unlike Conway, Phigg is the son of a wealthy man, a paper baron who employed the whole town. Like Conway, he had a toxic relationship with his father. Phigg was a man who valued appearances. What lay under that surface? Conway's investigation and personal relationships create a smoothly corkscrewing plot that deals with who owes what to whom and why. Not all of these characters are reasonable people, and watching them work it out is gritty and gratifying entertainment.

I wasn't surprised to learn that author Ulfelder is an amateur race car driver and co-owns a company that makes race cars. His knowledge of cars and carpentry adds authenticity to his unusual and likable blue-collar sleuth. Conway's alcoholism isn't off-putting. This well-crafted book was nominated for a 2012 Edgar for Best First Novel by an American Writer. I'm glad Conway is back in The Whole Lie, published earlier this year by Minotaur. 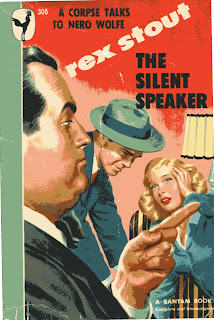 Nero Wolfe doesn't have Conway's strong work ethic. You won't see Wolfe racing to the mall in his Ford pickup to take advantage of Labor Day sales. This mountain of a private eye is content to stay at home in his Manhattan brown house. And why not? He has thousands of orchids to play with in his rooftop greenhouse, a gifted chef in the kitchen, shelves full of books in his office and a pool table in the basement. Wolfe hates working, but his house and staff gobble money. Part of assistant Archie Goodwin's job is to prod Wolfe to work when the bank balance is low. If a wealthy client doesn't spontaneously walk in, Wolfe designs a strategy to hook one.

That's what happens in The Silent Speaker. Cheney Boone of the Bureau of Price Regulation was escorted to a small room at a meeting of the National Industrial Association so he could prepare his speech. He is later found there, bludgeoned to death. Since the BPR and the NIA like each other as much as cats and dogs, there is a lot of finger pointing, but no evidence to back up accusations. The NIA is losing the public relations battle and decides to hire Wolfe. What comes then is a nifty plot that reflects 1946 business technology and the country's debate about governmental regulation of business. (Will this debate ever end?)

The Nero Wolfe series doesn't need to be read in order. The Silent Speaker is one of my favorites because Wolfe pulls a great stunt and Archie is bowled over by a beautiful blonde working girl (the formal rather than the slang definition). I know our Georgette Spelvin thinks Archie is close to the ideal American man, but I must disagree. I'll take Wolfe himself. With a guy like that, there'd be no debate about who needed the car or how much I spent on books. I'd retire from burning supper and watering half-dead plants. Retirement isn't on the mind of some characters in Dustin Thomason's 12.21. They believe that December 21, 2012 will bring an apocalypse. Serious scholars dispute that interpretation of the end of the 5,000-year-old Mayan calendar's Long Count. One of the foremost Mayan scholars is Chel Manu, a Guatemalan-American epigraphy expert at the Getty Museum and UCLA. It is now December 11, 2012, and Chel is risking her career by safekeeping an extremely rare Mayan codex from A.D. 900. The recently-discovered codex was smuggled illegally into the United States. Chel is over the moon. There are only four other Mayan codices known to exist, and this one might explain the collapse of the Mayan civilization. Chel is surreptitiously deciphering it when she receives a request from East L.A. Presbyterian Hospital. A very sick patient might be speaking Qu'iche, a Guatemalan dialect, and they urgently need her to translate.

Dr. Gabriel Stanton has already been summoned to Presbyterian by a young doctor who suspects this patient's symptoms might indicate a prions-caused disease. Stanton is a workaholic who studies prions, tiny proteins that cause incurable genetic diseases and other incurable diseases, like mad cow from eating contaminated meat. What Stanton discovers at Presbyterian is terrible news, and he and Chel will need to work quickly to stop a global catastrophe.

Author Dustin Thomason wrote the best-selling The Rule of Four, a 2004 literary thriller about the Hypnerotomachia Poliphili, a real Renaissance text, with his good friend Ian Caldwell. After that, Thomason earned an M.D. 12.21, published in August 2012 by The Dial Press, is fast and suspenseful reading, similar to books by fellow physician and science junkie Michael Crichton. Mayan history is fascinating stuff. So is medical research on prions. This is the perfect thriller for counting down the days to the end of 2012. Thanks go to hard-working researchers and the authors who write about them.

I'm joining other enterprising Americans for a last road trip this summer. Our good old-fashioned ingenuity and back-breaking work will have a big payoff when we fire up the grill and pop open those bottles of, uh, German beer. Happy Labor Day, everyone!