Veronica Mars: Not Just for Teens

If you keep up with popular culture––or even if you don't––then you probably heard recently about the website Kickstarter's impressive fundraising to make a movie followup to the Veronica Mars TV show. The show appeared for three seasons, from 2004-2007, starred Kristen Bell as Veronica Mars, Enrico Colantoni as her father, Keith, and featured a raft of young actors, like Tina Majorino, Jason Dohring, Percy Daggs III, Amanda Seyfried and Max Greenfield. Veronica Mars was set in the sun-drenched southern California beachside town of Neptune, where you were either extremely wealthy or worked for the rich folks. 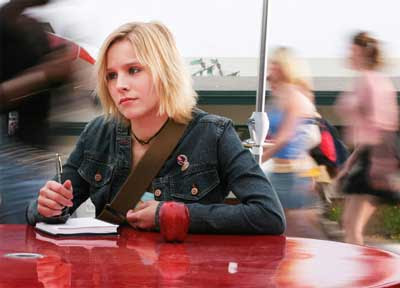 I remember one evening in 2004 when I was channel surfing and caught the beginning of the show. I was definitely not part of its target demographic, but who could resist the smartest, most badass 17-year-old blonde PI ever?

When Keith Mars was the county sheriff and Veronica was dating Duncan Kane (Teddy Dunn), son of billionaire software developer Jake Kane (Kyle Secor), she was part of the in crowd. All that changed after the murder of Lilly Kane (Amanda Seyfried), Duncan's sister and Veronica's best friend. Certain anomalies on the scene and in alibis made Keith suspect Jake. All hell broke loose after that. 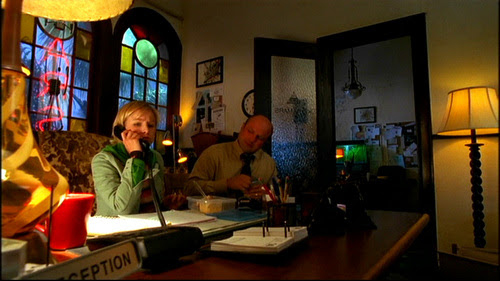 Veronica chose Keith. Working at Mars Investigations and being cast out by the 09ers opened Veronica's eyes to the dark underside of Neptune and Neptune High. She lost every bit of sunny naïveté she'd ever had and became a tough-talking teenage Philip Marlowe. She even packed heat and wasn't afraid to use it––in this case a taser, though, not a revolver. 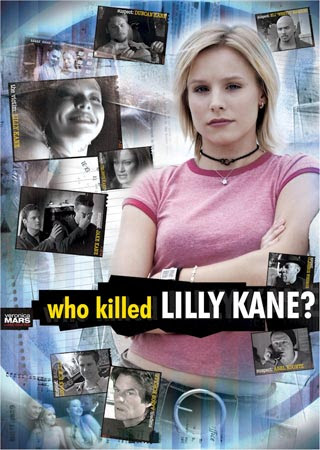 Here's the basic plot of Season One of the series. Like many crime series, there is a season-long mystery to be solved; in this case, it's the murder of Lilly Kane. This part of the story is a bit reminiscent of Twin Peaks, only without the incomprehensible and supernatural plot twists. Every episode of Veronica Mars also includes a single-episode mystery to be solved; either a case that walks through the door at Mars Investigations or something that comes up at Neptune High School.

In the pilot episode, Veronica rescues the new kid in school, Wallace, when he's found duct-taped to the school's flagpole. It seems Wallace made a big mistake in his job at a convenience store. He pressed the silent alarm button when local Mexican-American biker gang members shoplifted beer, but when the sheriff showed up and confronted the gangbangers and Wallace, Wallace decided his skin would be more likely to stay intact if he didn't rat on them. Too late, though. New Sheriff Don Lamb may be a smarmy jerk, but he's not an idiot. He calls Wallace a wimp and takes the store's security tape. Of course, that means the bikers are going to be charged. In one evening, Wallace has managed to alienate both the new sheriff and the biker gang members, who are classmates at Neptune High. 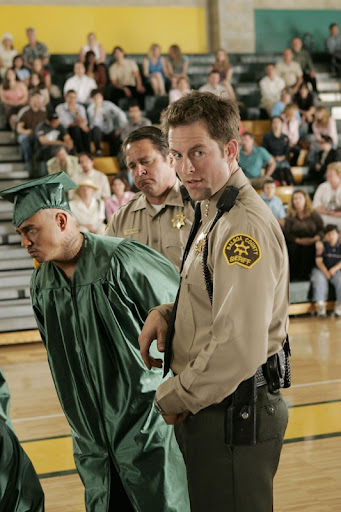 Now that Veronica has made friends with Wallace, that means she's got problems with the gang, including its head, Weevil. After exchanging some witty threats with Weevil, Veronica offers to fix the criminal case if the gang agrees to leave Wallace alone. She manages this in a clever caper that shows her ingenuity and the fact that in spite of everything, she still has some people in her corner. Her scheme gives Wallace protection and has the welcome side benefit of causing acute embarrassment for both Sheriff Don Lamb and one of her 09er tormenters.

In another episode, "Credit Where Credit's Due," Veronica has established an almost friendship with Weevil. (As the Shangri-Las used to sing, "He's good-bad, but he's not evil.") Weevil's grandmother is fired from her longtime domestic job with the family of movie star Aaron Echolls (Harry Hamlin) and is charged with having fraudulently used a credit card she obtained under the Echolls name. Veronica investigates, and in the process of clearing Weevil's abuela, she finds out a lot more about the secret lives of the 09ers––and Weevil's gang. 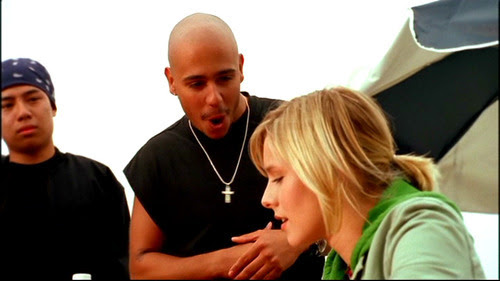 Subjects of other episodes' mysteries include missing family members, a dognapping ring, a school mascot-napping, a con game perpetrated against young 09er women, steroid smuggling, blackmail, extortion, a cult, money stolen in a high-stakes poker game, a fake ID ring, sexual harassment, domestic abuse, and bomb threats at Neptune High. And all the while, Veronica continues her investigation into Lilly Kane's murder, her missing mother, and her own rape at a party where she was roofied by a person or persons unknown. The final two episodes of Season One resolve all these mysteries, and they're thrill bombs, filled with action and motion. 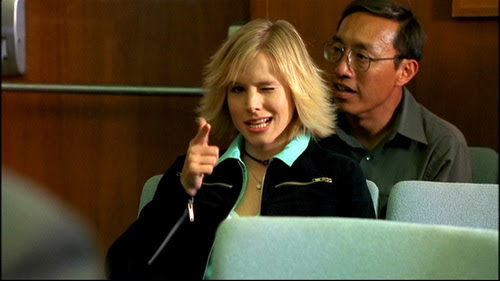 Despite the fact that this show's protagonist is a teenager, this is no juvenile effort.  The mysteries' construction and solution are a cut above most TV crime drama. True, there's still time for teen romance, Veronica's cat-and-mouse battle against Sheriff Lamb, frequent clashes with the half-admiring Vice Principal Clemens, and high school hijinks; not that that's such a bad thing. This is also one of those shows filled with music that sends you to iTunes to check out that song with the catchy hook.

Here and here are some amusing moments from the show. Several bits feature teacher Mrs. Hauser, and I should note that the episode involving her (2.13: "Ain't No Magic Mountain High Enough") may be a psychological catharsis for you if you've had lingering emotional scars from a nemesis teacher.

For somebody AARP-eligible to enjoy a show about a teenage PI should be embarrassing, but can I call this a guilty pleasure if I frequently recommend it to my contemporaries––and the ones who've watched it have given it rave reviews?

Today is the final day of the Veronica Mars Kickstarter campaign. If you want to be part of it, you can make a pledge anytime before 11pm EDT, here.

Even if you don't want to be part of the Kickstarter campaign, check out the show; no matter if you're well past your own high school years. You can easily find the DVDs for purchase or rental, or watch episodes online here. And, you're in luck, because reruns of the series have been showing on weekdays at 5pm EDT (and repeated on the weekends) for some months on SOAPnet (argh, I know), and they are back to the beginning starting today.