Bringing Up the Rear

I got a kick out of Maltese Condor's post on Wednesday, with its horse-racing theme. When I apply horse racing to my recent mystery reading, the books are far from front-runners. Actually, that's not quite right. The books are front-runners. But I'm reading from the back of the pack.

John Gardner and The Nostradamus Traitor

I don't think I'd ever heard of author John Gardner until a couple of weeks ago. My eye was caught by what I thought was a new book, called The Nostradamus Traitor. It turns out, though, that this is a republication, and a very nicely-produced one, of a 1979 original publication that was a finalist for the Gold Dagger that year. The Mysterious Press and Open Road Integrated Media are publishing the book this month in quality paperback and ebook formats.

Of course, I checked out Gardner on stopyourekillingme.com and I was flabbergasted to see how prolific Gardner was in his life (1926-2007). I was intrigued and had to do more research. Gardner began his writing career with a series featuring Boysie Oakes. The Oakes series is set in the swinging 1960s, but it's more of a spoof of James Bond, with Oakes being a professional assassin who doesn't like killing people.

The Liquidator, the first book in the eight-volume Oakes series, was a finalist for the 1964 Gold Dagger. Gardner went on to write several other series and a number of standalone crime fiction books. Probably the best fun fact about Gardner's career is that a few years after his last Boysie Oakes book, he was tapped by Ian Fleming's estate to write James Bond novels. He was so good at it (apparently) that he ended up writing 16 of them, including License to Kill and Goldeneye. How in the world did I completely miss this guy? I know there are gaps in my crime fiction reading, but this is one the entire Kentucky Derby field could run through.

The Nostradamus Traitor begins in London in 1978, when what appears to be an old lady tourist from Germany approaches a Beefeater at the Tower of London. Instead of the usual touristy question, though, Frau Fenderman is looking for information about her long-dead husband, Claus Fenderman, who she says was a spy for Germany in World War II and was hanged at the Tower.

This hot potato (that's heiße Kartoffel for you German speakers) lands in the lap of British Intelligence veteran Herbie Kruger. It's only fair, really, since Herbie speaks German, having been born in Berlin. Herbie was a young boy during World War II, living in Berlin with the mother who lost her husband to a battle with an RAF pilot.  Herbie'd lost his father, but he also lost his friends, Jewish friends, and he knew what the Nazis had done to them, so when the Allies arrived, he immediately made himself useful to them. He's spent decades running agents for Britain in the Cold War, and now he's nearing the end of his career.

Frau Fenderman's story seems plausible to Herbie and he even wonders if she might be a possible contact for his espionage group when she returns to Germany. But then things start to smell funny. There is no record of a spy named Claus Fenderman having been hanged at the Tower––or anywhere else in Britain, for that matter. Frau Fenderman also seems to be more familiar with London's streets than she should be. The suspicious smell becomes overwhelming when somebody takes a shot at the lady outside her London hotel.

What little history Herbie can winkle out of the old files hints that Claus Fenderman had something to do with a British wartime intelligence con game called Operation Nostradamus. Herbie sits down with an old acquaintance in the Foreign Office, George Thomas, to find out about Operation Nostradamus, which attempted to distract and discombobulate some of the top Nazis with a mix of real and fake prophecies from Nostradamus's famed 16th-century mystical book. (If you've watched The History Channel––or even Raiders of the Lost Ark––you know that several of the top men in the Third Reich, including Josef Goebbels and Hitler himself, were a little looney on the subject of the occult and were always ready to believe any psychic, soothsayer or mythologist who said––or seemed to say––encouraging things about the Third Reich's glorious destiny.)

Operation Nostradamus was George Thomas's first mission for the Special Operations Executive. He was dropped into France and instructed to contact a deep undercover agent, Michel Downay, who had cozied up to a couple of SS officers and was advising them about Nostradamus. George's job was to impersonate an academic specializing in Nostradamus, an ostensible colleague of Downay, and then get in with those selfsame SS officers and feed them Nostradamian misinformation. George had the heebie-jeebies about going behind enemy lines, period, but having to spend so much time with the SS really didn't help. And could he really count on Downay's being on the side of the Allies? How about Angelle, the alluring refugee living in Downay's apartment? Was she just a trap waiting to be sprung?

In The Nostradamus Traitor, Gardner takes us back and forth between Herbie's 1978 investigation of Frau Fenderman and the attempt on her life, and George Thomas's account of his espionage work in 1941. As Herbie's dogged sleuthing and George Thomas's story progress, Herbie sees that Operation Nostradamus in 1941 and Frau Fenderman in 1978 are more connected than he'd thought––and the connection presents tremendous danger in the current day.

If you're not familiar with The Mysterious Press, founded by the famed Otto Penzler in 1975, check out its website here. In addition to new fiction releases, The Mysterious Press republishes crime fiction classics and hidden gems in high-quality paperbacks. These aren't sloppily OCR'd reprints, either. All are newly typeset, formatted and proofread, printed on quality paper and given attractive covers. For those of you who don't do paper anymore, The Mysterious Press has teamed with Open Road Integrated Media, and offers its books in digital formats.

I'm excited that there are still four more books in the Herbie Kruger series for me to read, all available from The Mysterious Press/Open Road. Then, I can't forget Gardner's 29 books in the other series and standalones, as well as the 16 James Bond books. What with my World War II obsession, I've got my eye on Gardner's Suzie Montford series, about a police constable in London during the war. It begins with Bottled Spider, which they just happen to have at my library. I may be very, very late to the John Gardner stakes, but I intend to earn a spot in the running among his readers.

The Return of John Rebus

Way back in February, Della Streetwise told us here about her two recent "redonkulus reads": Jonas Jonasson's The 100-Year-Old Man Who Climbed Out the Window and Disappeared and Ian Rankin's Standing in Another Man's Grave. I rushed out and listened to the former and it really lightened a week of deep winter.

Somehow, though, despite Della's terrific review, I didn't get around to Standing in Another Man's Grave until this week. I always read all the John Rebus books right away in the past, but when Ian Rankin retired Rebus at the end of Exit Music in 2007, I eventually made the emotional adjustment to his leaving my reading life. (Though not well enough to read Rankin's Malcolm Fox books, The Complaints and The Impossible Dead.)

I think I was a little afraid to read Standing in Another Man's Grave. Would it be my old favorite Rebus? Now I'm wondering what I was worried about. He's the same guy, alright; the guy who drives everybody around him absolutely crazy because he breaks all the rules. The gravitational force of Planet Rebus is like a tractor beam that drags anybody who helps him into the disciplinary crapstorm that usually results from his misdeeds. 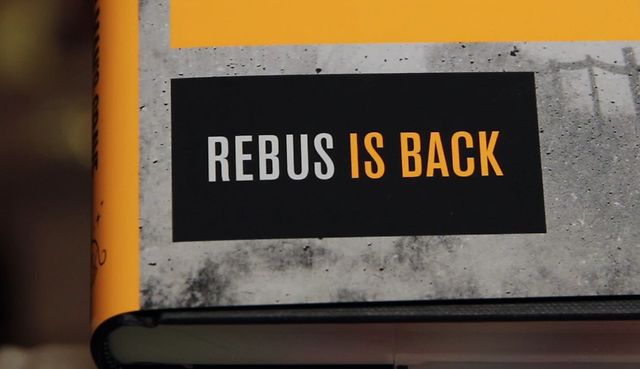 As night falls at the end of Standing in Another Man's Grave, Rebus must decide whether to fill out that application to be reinstated to CID. I wonder if he'll do it or if he'll decide that operating outside CID's rules is more to his liking. I'm looking forward to finding out. Next time, I'll be the first out of the gate.

Note: I received a publisher's review copy of The Nostradamus Traitor.
Posted by Sister Mary Murderous at 4:00 AM