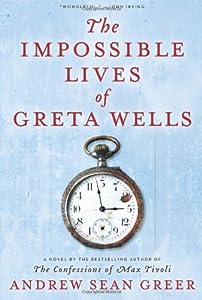 The Impossible Lives of Greta Wells by Andrew Sean Greer

In 1985, Greta Wells, of Patchin Place in Greenwich Village, is sliding deeper and deeper into an unshakeable depression. Her brother Felix has died from AIDs, and Greta's longtime lover, Nathan, has left her for another woman. The only person left in her life is her flamboyant aunt, Ruth, who lives downstairs.

Other methods having failed, Greta decides to try electroconvulsive therapy to shake off her depression. After the first of 24 planned sessions, she wakes up in her bedroom at Patchin Place, but everything looks different. And it is different, because inside and outside Patchin Place, it's late 1918. Greta is still Greta and aunt Ruth still lives downstairs, but Felix is alive and Nathan is married to Greta. After the second treatment, she finds herself in 1941, and after the third, back in 1985.

After only brief moments of disorientation, Greta immediately understands what has happened to her and she revels in each new-found world: "It seemed so possible that I could be somewhere else, again, that each morning would unfold anew like a pop-up book of possible lives."

As Greta cycles through the different worlds, she observes her various selves and the people she loves, and the different choices they've all made, in part because of the times they live in. And, as Ruth observes, she's always trying to make things better, to save those she loves from the wreckage.

I didn't so much read this book as fall into it. Before the story's text began, it felt magical, with its antique-style maps of Manhattan and Greenwich Village. Though it's a time-travel book, it's not about the technicalities and paradoxes of time travel. Greta's travels through time are simply the way she explores other possibilities for her life.

Although the book is more about Greta's relationships than time travel, part of the book's magic is in its evocation of New York in days gone by. In that way, it reminded me of that classic of time-travel New York, Jack Finney's  Time and Again. Like its protagonist, Greta isn't so caught up in her personal concerns that she misses out on all the beauty of the alternative worlds. She exults, "I was that visitor who comes to a country and finds it charming and ridiculous all at once."

Even during times of trouble and heartbreak, Greer's characters don't just inhabit their lives; they appreciate every experience and are fully aware of all that surrounds them. As Aunt Ruth observes, "Life, it's so unlikely. It's so much better than we think it is, isn't it?"

Andrew Sean Greer, author of the 2004 best-seller, The Confessions of Max Tivoli, is a simply sublime writer. His characters are engaging, his storytelling mesmerizing and I marked many passages for re-reading, just for the pleasure of rolling his words around in my head again.

The Impossible Lives of Greta Wells was published on June 25, by Ecco, and I'm willing to bet it will (deservedly) be on many book club reading lists in the coming year.

Note: I received a free publisher's review copy of the book. Versions of this review may appear on Amazon, Goodreads, and other reviewing sites under my user names there.
Posted by Sister Mary Murderous at 4:00 AM