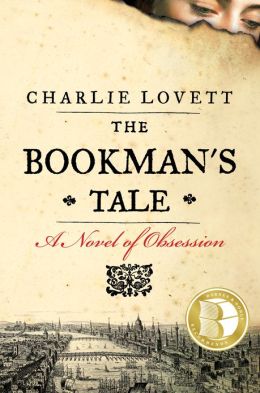 The Bookman's Tale by
Charlie Lovett

Our protagonist, Peter Byerly, is a young bookseller who caught the bibliophile bug at (the fictional) Ridgefield University in North Carolina. A scholarship boy with crippling shyness, his preferred work/study job was in the library, because he wouldn't have to interact with anyone. And yet that is where he meets the two great loves of his life: rare books and Amanda.

The story actually begins with Peter recently widowed, Amanda having died suddenly after they'd been married only six years. Heartbroken, Peter has fled North Carolina for the cottage in Kingham, Oxfordshire, England that he and Amanda had purchased the year before, and that workers had completed renovating and decorating, to Amanda's delightedly exacting specifications, weeks after her death. 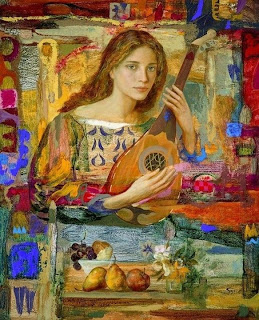 Now, months later, Peter resolves slowly to return to his antiquarian book hunter/seller work. In Hay-on-Wye, the renowned city of bookshops in Wales, he discovers a portrait of Amanda slipped inside an old volume. But it can't be Amanda, because this is a Victorian-era portrait. The discover electrifies Peter. He must find out where this portrait came from.

A request to evaluate a local Kingham resident's manor-house collection of antiquarian books leads Peter on a quest for what he calls the Holy Grail: proof that William Shakespeare really was the author of all those plays and sonnets, rather than Marlowe, de Vere, Bacon or one of the other better-educated writers often claimed to be the more likely source.

Peter's two quests become a thrilling adventure, especially for readers fascinated by old books and their travels through time and the lives of their owners. Each chapter tells one of three stories: Peter's modern-day (1995) pursuits, his life with Amanda, and the chequered past of the grail book. The three yarns wind around each other skillfully, each part adding extra richness to the others, then converging in a deliciously satisfying way.

When I turned the last page of The Bookman's Tale, I was shocked to see it was 1:30 am. And still, though I'm very much an "early to bed, early to rise" person, I sat and thought about the book and wrote a review, not finishing up until after 3:00 am. It simply never occurred to me to think about the time while reading this tremendously enjoyable bibliographic detective story.

I'm not going to claim that The Bookman's Tale is high art, and crime fiction buffs will probably figure out the whodunnit side of the tale fairly early on, but it's terrific, old-fashioned entertainment, and you may be as obsessed about finishing it as I was.