Dazed and Confused on Presidents' Day It's a state and federal holiday, but who knows exactly what we're celebrating today? It's Presidents, President's, or Presidents' Day. Here in California, we're honoring George Washington and Abraham Lincoln; if you live in Alabama, you might be saluting George Washington and Thomas Jefferson. Some parts of our country are generously honoring everyone who's ever held the office of United States President.

At Read Me Deadly, we'll focus on George Washington; however, we'll observe the confusion that's become traditional to the day. In other words, don't expect me to make perfect sense. 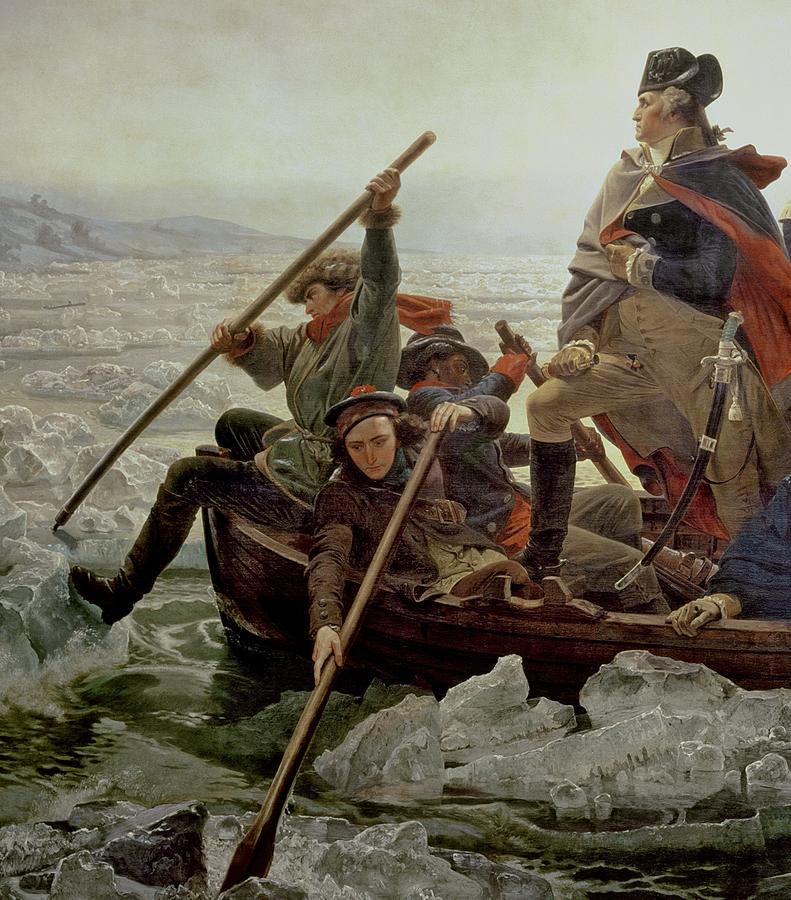 To honor Washington's military leadership during the American Revolution, you could read David McCullough's nonfiction book, 1776. Alternatively, you could strip off your clothes, close your eyes, and visualize Emanuel Gottlieb Leutze's 1851 painting of Washington's Delaware River crossing on Christmas night, 1776, before the Americans surprised the Hessians at the Battle of Trenton. Now, sing Yankee Doodle while you fill the bathtub with cold water and ice cubes. Clamp your teeth to stifle shrieks that would alarm your dog, and slip into the water with a mug of hot-buttered rum in one hand and the book of suspense perfect for today, Elisabeth Elo's North of Boston (Pamela Dorman Books/Viking, 2014), in the other hand. In the book, Boston perfume company heiress Pirio Kasparov does what few people could do: she survives four hours floating on a piece of wood in the frigid Atlantic after her friend Ned Rizzo's new lobster boat is sliced in half by an unidentified freighter. Pirio is rescued by the Coast Guard, but Ned is never found. As her father says, Sam Spade wouldn't let his friend go unavenged, and neither should Pirio. And, how can Pirio look Ned's young son, Noah, in the eye if she doesn't find out who killed his father? I wanted to read this book as soon as I saw its synopsis, but I wasn't expecting the story-telling talent of first-time writer Elo. Pirio, who narrates, spent her rebellious childhood enduring punishment at boarding school. Now, she has complex relationships with people who seem real: her beautiful, enigmatic mother, dead since Pirio was 10; her self-absorbed Russian immigrant father and his second wife, whom he doesn't love; geeky Noah and his irresponsible, alcoholic mother, Thomasina, whom Pirio has known since boarding school; and her ex-lover, John Oster, a fisherman friend of Ned. This is a book that combines a quest with the examination of childhood memories, the compromises of growing old, and oceanic environmental issues. Pirio could have hired a private eye to look for Ned's killer, but that would have been a whole lot less fun. She's tough, smart, and tenacious—I hope we see more of her. At first glance, the reason for reading Martha Grimes's satire, The Way of All Fish (Scribner/Simon & Schuster, 2014), to commemorate Washington may not be apparent. Trust me. Fish (you do remember the Delaware River, right?), the British (Washington fought 'em for our independence, and Grimes, an American, is famous for her series books named after English pubs, although this book is set in New York), hit men (think guns and the death of war), the world of publishing (Washington chopped down that cherry tree when he was a kid, and we all know trees turn into paper and books), and convoluted plots and lies (Washington didn't tell a lie when he confessed to felling that tree, but the truth is, he probably didn't chop down anything). We'll skip further sketchy evidence that Grimes's book is suitable for Presidents' Day and go directly to its first paragraph: They came in, hidden in coats, hats pulled over their eyes, two stubby hoods like refugees from a George Raft film, icy-eyed and tight-lipped. From under their overcoats, they swung up Uzis hanging from shoulder holsters and sprayed the room back and forth in watery arcs. There were twenty or so customers—several couples, two business-men in pinstripes, a few solo diners who had been sitting, some now standing, some screaming, some crawling crablike beneath their tables.

Nobody got shot; it was the Clownfish Café's aquarium that exploded. Candy and Karl, contract killers whom we met in 2003's Foul Matter, had tailed literary agent L. Bass Hess into the café (Candy and Karl insist on getting to know a mark before they decide whether he deserves killing), and exchanged gunfire with the fleeing shooters. When they re-holstered their guns, they followed the lead of a blonde woman who had been reading and eating spaghetti alone. She tossed the wine out of her glass, filled it with water, and saved a fish. Pretty soon all the aquarium's fish were swimming in glasses and water pitchers, and Candy and Karl had a new interest: clown fish.

They are further interested when they discover the beautiful blond is the target of an outrageous lawsuit by Hess, who says she owes him money for a book written two years after she fired him. Candy and Karl decide to kill two birds with one stone: they'll neutralize (but not kill) Hess and rescue poor, innocent Cindy, who's been suffering from writer's block and victimized by lawyers, who may not be working entirely on her behalf. This involves recruiting Foul Matter's publishing titan Bobby Mackenzie and best-selling thriller writer Paul Giverney, and a host of other characters, such as a weed smoker who wrestles alligators in Florida during tourist season and a brainy Malaysian femme fatale so interested in the scheme that she's almost willing to work for free. If you haven't read Foul Matter, the references to that book's plot are a little confusing, but you're all smart people, capable of figuring it out, and, if you can't, well, President's, Presidents', or Presidents Day is a little confusing, too, and we're not talking about how you absolutely must understand this to the letter—we're not building a nuclear bomb here. Writer Grimes obviously had fun writing it, and I had fun reading this entertaining satire.

Happy holiday, no matter how you spell it or whom you're celebrating.
Posted by Georgette Spelvin at 11:42 PM