Career Options for the Criminally Inclined

Despite the slowly recovering economy, career opportunities for ambitious and unscrupulous new graduates are not very inspiring. The get-rich-quick, get-out-first opportunities of the 1990s and early 2000s collapsed with the big banks and the sub-prime mortgage scandals.

Good hacking skills won't even guarantee a steady job with the NSA anymore, and all the more lucrative credit and bank card hacks seem to be coming from overseas. What's an aspiring criminal to do? The recent proliferation of books, both biographical and fictional, written from the criminal's perspective provide some interesting, if usually disastrous, suggestions.

The Intern's Handbook by Shane Kuhn

At 24, John Lago is pushing the age limit for his extended career as unpaid intern and very well-paid assassin in some of the country's top corporations and law firms. He had been plucked from the juvenile justice and foster systems half his lifetime ago by Bob, founder and president of HR Inc., a very special staffing service. During the course of this, his last job for HR, John decides to write a manual for all the bright-eyed, trigger-happy hopefuls who will follow in his career path, taking them step-by-step through this last case.


"At the very least, you're embarking on a career that you will never be able to describe as dull. You'll meet unique and stimulating people from all walks of life. And kill them...
This work isn't for everyone. Most of you are going to find this out the hard way because you'll be dead by the end of the month. And that's still the training phase."

This particular job has an unusual wrinkle: John doesn't know which of the three senior partners at the prestigious law firm is his target. One of them has obtained a list of people in the FBI Witness Protection Program and is offering it to the highest bidder. Quite a brisk underworld auction is in progress, and John, with the help of HR's extensive resources, must identify and eliminate the seller before the list changes hands. This is a fast moving, darkly humorous story, reminiscent of much of Christopher Moore's work. The author has written professional screenplays, and his visual background is apparent in the movie-like action scenes. Despite the story going a little off track for the last few chapters, as the final set of betrayals played out, I enjoyed it very much, but can't recommend it as an easy or pleasant path to career success. As part of his cover on various jobs, John has had to pass the bar exams four different times. Not the kind of skills you can readily pick up from video games!

Shane Kuhn is a co-founder of the Slamdance Film Festival which showcases independent film productions. The Intern's Handbook (UK title Kill Your Boss) is his first published novel. 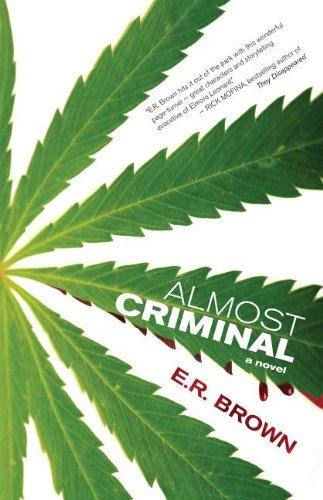 Almost Criminal: A Crime in Cascadia Mystery by E.R. Brown

At 17, Tate MacLane can see no way out of the little town of Wallace in British Columbia. A bit of a prodigy, he had started college on a full scholarship at 15, but blew the scholarship and was sent home to his mother and younger sister. Elsbeth Templeton, or Beth, as both of her children call her, is an artist of some note, but little wealth. Just as her career was taking off, she developed cancer and couldn't paint for over a year. Tate, home from college, is now the sole support of the family. His job as part-time barista at Human Beans, the only coffee shop in town, isn't enough. He desperately wants another shot at college, but sees no way to accomplish it.

One day, a well-heeled regular customer asks Tate to secretly deliver a letter to a woman at another table. He leaves the envelope and a $20 tip. Randall Kennedy's yellow Porsche begins to appear regularly at the coffee shop, the driver always ordering his macchiato while surreptitiously checking Tate out. Kennedy appreciates Tate's care with his coffee, and gradually eases the boy into his business.

The countryside around Wallace is host to a number of marijuana growing sites. The draft dodgers of the Vietnam era who fled to Canada brought the habit and seeds with them. While they keep a low profile, marijuana use for medical purposes has been legal in Canada for a number of years, and more recently in several US states.

Kennedy runs a boutique marijuana operation; he is as much a perfectionist about his weed as about his coffee. He ships his specialty seeds all over the world via internet sales. The biker gang that controls distribution in that area is not too greedy, and there is no violence until the impending wider legalization in the US brings a bigger, nastier, and more professional set of thugs into sleepy Wallace. This is not a story of addiction––few of the major characters in the book even use marijuana except very casually, but the economy of the entire area is heavily dependent on the product. From growing and harvesting, to packaging and running product, to laundering the cash, Tate learns that nearly everyone he knows is involved in some way. Unlike The Intern's Handbook, which cannot be considered anything but satire, Almost Criminal seems completely plausible. How many ignorant, impatient young people get slowly sucked into situations like Tate's and can't find their way out? Their stories can be read on police blotters and seen in chalk outlines on the evening news any day, in any community. A very poor career choice, but one that too many kids are choosing, for a variety of reasons.

Almost Criminal (Dundurn, 2013) is E.R. Brown's debut novel, and has been shortlisted for the 2014 Edgar Award for Best Paperback Original. I hope it wins; it offers a disturbing and honest look at a problem as huge and intractable as Prohibition was to an earlier generation.

Note: I received a free review copy of The Intern's Handbook, which will be released in the US by Simon and Schuster on April 8, 2014.
Posted by Periphera at 3:11 PM