These days, the word "green" is being bandied about in all sorts of ways. When Kermit sang "It's Not Easy Being Green," he was referring to the color of his skin. Now it could be mistaken for a lament on the difficulties of recycling and saving resources of all kinds for the betterment of the earth. I hear phrases like "my office is green" and no longer assume that the worker is envious of the office next door. But if you are following the latest library trend of book Christmas trees, you would not help but be envious of the creativity used by librarians around the world.

Many libraries are suffering from the lack of a budget for holiday decorations and have found more than one use for their books. They have created trees that require absolutely no water and can be taken apart and reused. The tree above is from Gleeson Library in San Francisco. 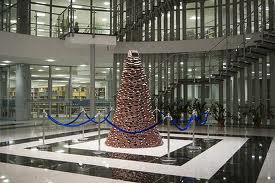 From the Old World comes this picture from the University Library of UWM (University of Warmia and Mazury) in Olsztyn, Poland.

Janet Randolph in her Mystery Fanfare blog shows some excellent examples of trees created in this way. I thought I would take a leaf from her book and think about what kind of tree my favorite characters would build.

Ken Bruen's Jack Taylor loves and cherishes his books. He only owns a few due to his somewhat peripatetic lifestyle, but he would honor them with a star. The tree at left is a mixture of tipsy and balance just like Jack himself. 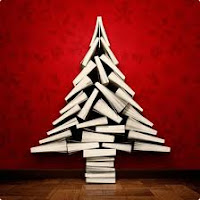 Walt Longmire, a Wyoming sheriff created by Craig Johnson, wouldn't spend the time or effort looking for a tree unless his daughter Cady would be home for the holidays. But I can just see him putting together this collection from his shelf of books because it looks outdoorsy and rustic.

Neil Hamel, a lawyer in Albuquerque, New Mexico spends more time solving her (yes "her," despite the name) cases in novels written by Judith Van Gieson than she does doing housework. After settling down in the evening with a glass of tequila, she would look up at the books on her shelf, realize that there was a method to her collection and she would top it off with a star. 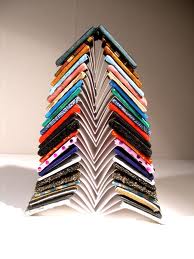 Margaret Maron's Sigrid Harald, a lieutenant in the NYPD, has learned a little color sense from the time she spent with her artist lover Oscar Nauman. Rather than brave the jam-packed New York City crowded streets she would wile away her down time by creating the tree at right. A tall woman, she has considered herself plain, but there is beauty for those with discerning eyes. 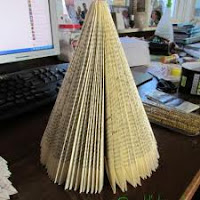 Kathy Mallory is another New York City Police lieutenant who has little free time. Those moments of leisure are usually filled with her somewhat nefarious hacking skills. In Carol O'Connell's novels, she is very methodical and precise in both her private and professional life. She might own only a few books because she lives a minimalist lifestyle. She would definitely spend the time it would take to create this tree with its precision corners.

Charlaine Harris's Sookie Stackhouse is quite traditional and would like the red and green displayed in this bright tree. She would have her roommate witch do a spell to get the right number of books in the appropriate colors. Sookie herself has to watch her dollars and would enjoy having a double-use tree. 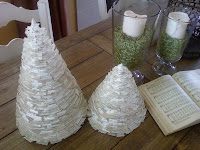 Peaches Dann is a sleuth created by Elizabeth Daniels Squire. Peaches is getting older and, while she has always had some problems with her memory, she has learned ways to cope. Of all her methods, the endless stream of post-it notes can come in most handy. But how do you handle the little pieces of paper when they have outlived their usefulness? By morphing them back into a tree, of course. I couldn't find a tree made out of Kindles, Nooks or iPads, but they wouldn't be green anyway.
Posted by Maltese Condor at 4:00 AM