So Black Friday has come and gone and Cyber Monday is history. My major decisions about gift giving have been made for the most part. So now it is time to concentrate on the little things that make holidays so special. Maybe it's time to follow through on the resolutions for 2011 before another year is upon us. I have some small suggestions for you to either put on your wish list or to give to the needy members of the family. All of these things would fit in a Christmas stocking or a St. Nick's shoe on December 6. 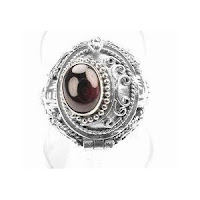 Do you have a co-worker who is driving everyone in the office mad? Then I suggest this small poison-containing ring. Perfect for a little sleight-of-hand during coffee break and you will start a new year happier at work, and maybe even nab a promotion. Agatha Christie always called poison a woman's weapon, I don't know about that, but I will say that the poison rings available on Amazon seem to favor the feminine tastes. 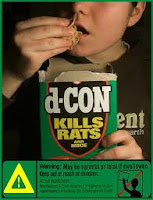 Then there is that brat next door who keeps parking in your spot and leaving you to carry groceries an extra 20 feet. He is sort of a rat, isn't he? Just head straight to Amazon for a great selection. Two-day delivery. It would probably look nice sprinkled on some gingerbread. I could put this in my husband's stocking but he would just think we had a rodent problem and miss the point entirely. 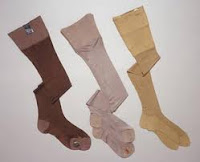 Is there someone you know who has a boss who keeps harassing her? A small gift in a variety of colors might give her the hint about how to take care of her problem. After handling the situation she could leg it out of the crime scene wearing the weapon. Anthony Berkeley might be able to give you some hints if you read his The Silk Stocking Murders. In this story several young girls were killed by this gentle-looking weapon. Sherlock Holmes had a time with them in his story "The Case of the Silk Stockings." These days, although not worn as commonly, you will find them on Amazon. 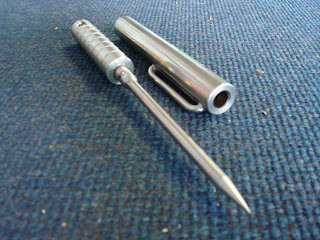 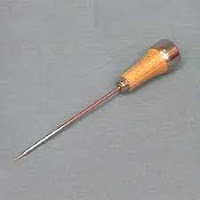 Your friend doesn't want to be discovered doing the dirty deed? The old ice pick in the ear befuddles the police sometimes. There is even one with a cover so it won’t stick though the Christmas stocking and it will look like a pen in a pocket. This way, he won't have to use whatever is at hand––like the murderer in Black, White and Dead All Over. John Darnton's killer used a paper spike sitting on a newspaper editor's table. You can quietly order a number of the usual picks from Amazon––or maybe from a spearfisherman company. 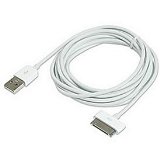 On the other hand, here is something that is easily available, yet appears innocuous. It is the easy-to-carry, non-threatening USB cord. It is so much better than the old lamp cord, which comes attached to a lighting appliance. I have not read about a murder using this method of strangling, but I will admit to having been driven to murder when needing to use some USB cords for more banal purposes. But the Apple techies in Bangladesh are too far away to strangle. 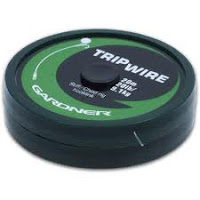 If the problem is that your cousin doesn't really like blood on her hands and would prefer to be setting up an alibi elsewhere, she might find some uses for this little gem. Certainly Inspector Foyle and crew had a time with a murder by this method in the case of "The German Woman." The Foyle's War series is available on DVD. Please keep in mind that these wires leave marks wherever they rub, so this is another use for the silk stocking. 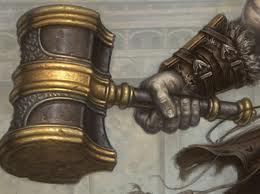 Have you been misjudged once too often and can't take it any more? Well, these handy little items come in a variety of shapes and sizes. You can pretend you are mashing potatoes. The most recent story I read involving death by blunt instrument involved a baseball bat. This gavel is much more symbolic and is much easier to conceal. Just use One-click ordering at Amazon.


On the other hand, something much less messy and quite painless is the little old red capsule. I don't know how everyone in mysteries is so well acquainted with the smell of this poison. How many of you are familiar with the scent of bitter almonds? I can't even smell regular almonds unless they are the candy-coated kind. In Blotto, Twinks and the Ex-King's Daughter, Simon Brett opens the story with a nice case of the poisoning of a special agent of a king. And the smell, of course, gives away the modus operandi immediately: cyanide! 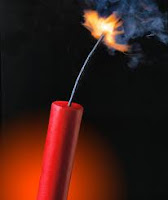 Is your uncle unconcerned about collateral damage? Well, Alfred Nobel may have had murder in mind as a side effect when he made these little sticks so handy. Stephanie Plum gets on a lot of people's nerves and Janet Evanovich writes that villains have used these handy small bombs to blow up plucky Stephanie's vehicles. I just wish these detonations would make her more decisive, especially about the men in her life. She could use a little brain rattling every now and then to get her out of her rut.

Those of you with green thumbs may not need this handy little how-to book, Handbook of Poisonous and Injurious Plants. Naturally, it is available on Amazon. Just use your pay phrase for easy shopping. Even though I took plenty of chemistry classes in my time, I would need help going from pod to poison. Sheila Pim does a wonderful job of educating us on the dangers in gardening and the knowledge one can acquire for nefarious purposes in her Irish series, which include Creeping Venom and Common or Garden Crime. Bartholomew Gill also uses a foxglove as the MO to make Peter McGarr cudgel his brains looking for a suspect who fits his frame in Death of an Irish Lover.


Socrates used the attractive hemlock plant to end his own life when under a sentence of death. The Hemlock Society, founded as a right-to-die organization that would help people take the final step, took its example from the old philosopher who was deeply into the study of ethics. It has morphed into another society called Compassion and Choices. But these days so far, one man's easy crossover is another man's murder. Those of you who have hemlocks in your backyard can easily make a treacherous tisane if you find it necessary. If you are not so blessed, Amazon has a Hemlock Tree Growing Kit. The rest just requires patience.

If being creative is not for you, there is always the old standby: the pistol. These special items would fit easily into any stocking. These days, guns are at the top of the list as a choice of a deadly weapon here in the U.S. But it is always less expected in England. Still, P. D. James in The Black Tower has the murderer use a pistol. But I must warn you, that with these weapons that would be easy to drop in a stocking, you won't ever be in a position to say, "Do you feel lucky today, punk? Well, do you?"

These pocket-sized weapons may seem to be more to admire than fire but here you must rely on location, location, location. Nonetheless, don't try to take them on an airplane or you will find yourself out-gunned. 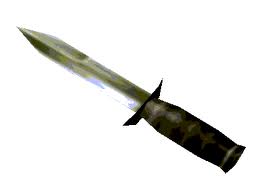 The most up-close-and-personal method for murder is the knife. Since they are readily available in one's kitchen I might have to remind you that it is best to use a weapon that can't be traced back to you. Here again Amazon has quite a selection on sale. 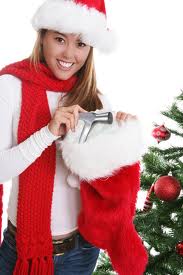 There you have it. For most of your murderous shopping needs, Amazon is the place for one-step ordering. I did not overlook the once-ubiquitous letter opener used to great effect in so many murder mysteries. It too would fit the small-but-lethal criteria that makes for such a special touch for the holidays. I fear using the letter opener would date you because only a few of us still get mail in envelopes. So have fun filling those stockings.
Posted by Maltese Condor at 9:04 AM