The Naughty Take Their Lumps

Yesterday, while shopping at Trader Joe's, I came across the perfect holiday gift for someone who's been naughty this year: little pieces of minty candy cane drenched in rich dark chocolate so that it resembles lumps of coal. You may have a person on your shopping list who deserves such a gift. God knows the world of crime fiction is replete with characters for whom such a gift would be appropriate.

Now, I'm not talking about villains so nasty their own mothers, if sensible, would shriek and run at the sight of them: Not Hannibal "The Cannibal" Lecter of Thomas Harris's Red Dragon and Silence of the Lambs or the serial killer of T. Jefferson Parker's The Blue Hour. Not the criminal masterminds Professor Moriarty (Sir Arthur Conan Doyle) and the Deaf Man (Ed McBain). Or the psychopathic lawmen of Jim Thompson's The Killer Inside Me and Pop. 1280.

And certainly not the vicious albino hit man Grady Fisher in Urban Waite's The Terror of Living. The word is "naughtiness," not "depravity." Hand the coal to the decent-but-flawed Phil Hunt, who spent 10 years imprisoned for the shotgun killing of a bait-shop owner during a robbery that netted him $40 when he was a young man. He straightened out after prison and married a good woman, but their lives are a constant quiet struggle. To supplement the income they make raising and boarding horses on a small farm in northwest Washington State, Hunt occasionally smuggles illegal drugs by riding one of his horses into the mountains and fetching a package dropped out of an airplane. Hunt should have quit while he was ahead. His last job is interrupted by off-duty deputy sheriff Bobby Drake, who struggles with emotional baggage involving his father, a disgraced ex-sheriff. The novice smuggler accompanying Hunt is caught, and the drugs are lost. Suddenly, Hunt's life, never easy, is made a heck of a lot harder now that he has Drake, the DEA, and Fisher, who's been hired by a drugs kingpin, hot on his trail.

The Terror of Living is Waite's 2011 debut, a book that straddles literary and mystery fiction. If you only read cozies, it's not for you; rather, it's for people who like Cormac McCarthy, Robert Stone, Graham Greene, Dennis Lehane or George Pelecanos. It's about how bad things happen to good people or how good people make bad decisions, setting them on a train going too fast for them to leap to safety. Waite's tale isn't entirely unpredictable, but his characters are eloquent, the setting is beautifully described, and the writing is assured. I look forward to this young writer's books in the years ahead.

Let's now stop gazing ahead and take a look back over our shoulders and across the pond (I have a crick in my neck just writing that), where another man merits a piece of our coal for naughtiness: Margery Allingham's Magersfontein Lugg, sleuth Albert Campion's second banana. Has there ever been a fictional character more aptly named than the lugubrious and vulgar Lugg? A Cockney who was once a cat burglar, Lugg now functions as Campion's loyal manservant, heavy, and expert on England's criminal underworld. Lugg is no better than he has to be. The first book in this Golden Age classic mystery series is The Crime at Black Dudley. In that book, Campion investigates the death of his host at a weekend house party without Lugg's assistance. He meets Lugg in the second book, Mystery Mile, while looking into all the deaths and close calls that occur around Judge Crowdy Lobbett. The most energetic, light-hearted, and creative wordplay in the series is found in More Work for the Undertaker, in which Campion and Lugg become involved with the extremely eccentric and literary Palinode family while searching for a multiple poisoner. The most serious and beautifully atmospheric book is The Tiger in the Smoke, featuring the escaped prisoner, sociopath Jack Havoc. (Allingham is wonderful with names.)

Like Lugg, E. W. Hornung's A. J. Raffles is a talented detective when tracking a man responsible for crimes other than his own. He is England's best cricketer and a sociable gentleman who lives at a prestigious address: The Albany, in Piccadilly. He's patriotic and once sends the Queen a gift. But Raffles receives a lump of coal because he's a daring and cynical thief who steals for the challenge and excitement in addition to the money, which he occasionally gives away. (That gift to the Queen was stolen.) He's a safe cracksman and a master of disguise.

Raffles appears in a novel and more than 20 stories chronicled by his old school friend Bunny Manders. (All of Hornung's short stories featuring Raffles, written from the 1890s to the 1920s, can be found in the 1984 book, The Complete Short Stories of Raffles--the Amateur Cracksman. After Hornung, other writers continued the series.) Bunny loves Raffles and is ambivalent about his criminal career.  Hornung's friend and brother-in-law, Sir Arthur Conan Doyle, also didn't entirely approve of anti-hero Raffles. Although these stories exhibit the prejudices of their time, they are classic adventures that are a pleasure to read. You can also search for a play, several films, a radio series, and a British TV series that feature Raffles.

More idealistic and romantic than Raffles is Leslie Charteris's Simon Templar, a dashing figure whose true name is unknown and whose nickname is "The Saint." His calling card, which he leaves at scenes of his activities, features a stick figure with a halo. The Saint earns his coal by operating as "the Robin Hood of Modern Crime" outside the law to right wrongs and avenge innocent victims by stealing, killing, and helping people. He's a master of disguise, a skilled knife thrower, and an expert fighter. Danger is good for you, he says, because it makes you feel intensely alive. The tales are of all sorts: character studies, whodunits, ghost stories, science fiction, or straight adventures. We first meet The Saint, who has barely arrived in the small town of Baycombe on the coast of England before an assassin appears, in the 1928 book Meet the Tiger. Following that first appearance are portrayals in more novels (written from 1967 to the end by people other than Charteris), short stories, radio programs (Vincent Price is the best known Saint), several TV series (Roger Moore became internationally famous in this role), films (George Sanders in the 1930s and 40s), comics, plays, and magazines. 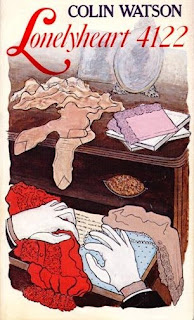 Before heading back to the United States, let's pay a visit to Colin Watson's Miss Lucilla Edith Cavell Teatime, who well deserves her lumps because she's an endearingly genteel criminal who specializes in con games and theft. Miss Teatime appears in Lonelyheart 4122 and all subsequent books in the Flaxborough Chronicles series except Blue Murder. In Lonelyheart 4122, Inspector Purbright investigates the Handclasp House, a matrimonial bureau that may be involved in the disappearance of two women. Purbright runs across Miss Teatime and warns her about the bureau, but she pays no attention. In Just What the Doctor Ordered, three Flaxborough women are attacked by elderly men (one man threatens to "pollinate" one of these women). The men escape from the scene by running sideways in a crab-like fashion. Purbright suspects an herbal elixir for virility. He doesn't know what to suspect in Six Nuns and a Shotgun, because all he has is a telegram about two naked nuns in Philadelphia. In all of these books, the clever and enterprising Miss Teatime is a thorn in Purbright's side. Watson's Flaxborough books are filled with eccentric characters; they are clever and amusing. I highly recommend them.

We'll have to catch Simon Brett's Melita Pargeter, a gentleman crook's widow who often turns her hand to investigations, and Jonathan Gash's shady antiques dealer, Lovejoy, later. Let's return to the States, where our next coal recipient is Donald E. Westlake's John Dortmunder, a determined and good-hearted man who has no pretensions to a life outside of crime. Dortmunder isn't the sharpest knife in the drawer, however, so the plots he masterminds are invariably foiled by his scruples, his inept colleagues, or plain rotten luck. There are fifteen books in this entertaining series, which opens with the newly paroled Dortmunder's attempt to steal the Balabomo emerald in 1970's The Hot Rock. These books feature masterful plotting, great small-time crooks' lingo, fine suspense, twists and turns, and a delicious sense of irony. I enjoyed all of them. Here are a couple: Bank Shot, in which the bank is in a mobile home, so stealing the money means stealing the bank; What's the Worst that Could Happen? features the theft of Dortmunder's lucky ring by a well-to-do businessman, so Dortmunder assembles a team to seek revenge; Bad News involves the taking over of an Indian gambling casino. For a list of the books in the series, see Westlake's page on Stop You're Killing Me.

We could drop off coal to John D. MacDonald's adventurer Travis McGee, but that will take a separate trip. Instead, we'll make a quick visit to Bernie Rhodenbarr, Lawrence Block's genial New York City burglar. The first book in the series is Burglars Can't be Choosers, in which Rhodenbarr is caught burgling an apartment. He pays off the cops, but then things change when they find a body, and Rhodenbarr has to run. Among good books in this series are The Burglar Who Painted Like Mondrian (Bernie's friend Carolyn's cat is kidnapped, and a Mondrian painting might be the ransom) and The Burglar Who Traded Ted Williams (Bernie has opened a used bookstore in an attempt to go straight. When his landlord's demands return him to a life of crime, a dead body in the apartment he's burglarizing and a frame job involving a stolen baseball card collection give him a headache).

Our coal all delivered to its worthy recipients, let's relax with some Speculoos Wafers (from a Washington Post recipe based on a thin, spiced French cookie) and some strong coffee. While we're relaxing, we can talk about other characters who require our coal and the gifts we're going to give those who are nice.
Posted by Georgette Spelvin at 8:00 AM