April Is the Cruelest Month

Today is a good time to think about the meaning of human frailty, death, and redemption, whether one celebrates Easter as the resurrection of Jesus Christ or the glorious rebirth of the earth.

Below are some books of crime fiction set during Lent or the Holy Week culminating in Easter:

Ayacucho means "place of the dead." It is the capital city of Huamanga Province in Peru and is famous for its 33 churches and the large religious celebrations during Holy Week.

It is also the birthplace of Associate District Prosecutor Félix Chacaltana Saldívar. Chacaltana's March 8, 2000 report about a dead man opens Santiago Roncagliolo's literary thriller, Red April. The corpse, burnt to a crisp and missing an arm, has been discovered in an Ayacucho hayloft on Ash Wednesday. The body isn't recognizable, and possible witnesses were too inebriated from days of celebrating to notice anything.

Chalcaltana is a man who only recently returned to Ayacucho after spending most of his life in Lima. He's incapable of lying and consumed with duty to his profession and the memory of his mamacita. He's in charge of the investigation because the police don't want to touch it. They fear the press will get wind of it and scare away tourists, or the government in Lima will hear of it and scuttle their promotions. The local military man in the Ministry of Justice, Commander Carrión, wants Chalcaltana's reports personally. He brushes off Chalcaltana's questions about whether this death could mean a return of 1980s terrorist violence by Sendero Luminoso, the Shining Path. "Get one thing into your head: in this country there is no terrorism, by orders from the top," Carrión says. Then he sends Chalcaltana on a hellish trip to observe elections in Yawarmayo.

Chalcaltan's series of ludicrous investigative reports, written as ordered by Carrión to reflect the official line, are studded throughout Roncagliolo's tale rich in Peruvian history, symbolism, and folklore. They are accompanied by another type of report in small letters and full of misspellings, which appear to be written by a killer. The Ash Wednesday corpse is just the beginning of a religious season of murders and more; Chalcaltan and his colleagues are "fighting against ghosts, against the dead, against the spirit of the Andes." In Red April, translated from the Spanish by Edith Grossman and winner of the 2006 Alfaguara Prize, it's difficult to tell the difference between the terrorists and the counterrorists. There are plenty of murders and disappearances to go around for everyone.

Army helicopter pilot is an unusual occupation for a woman who becomes an Episcopalian priest, but Rev. Clare Ferguson is an unusual woman. She's relieved when money is located to repair the roof of St. Alban's, although she's concerned because it will affect funding for the town's free health clinic. The clinic was founded by the widow of Jonathon Ketchem, who disappeared during Prohibition. When the clinic's director, Dr. Allan Rouse, disappears, some suspect a disgruntled young woman, but Clare and Chief of Police Russ Van Alstyne disagree.

Out of the Deep I Cry is the third book in Julia Spencer-Fleming's traditional series set in Millers Kill, New York. The story is told with flashbacks to earlier decades, all against the backcloth of the present Lenten season at St. Alban's. When Clare and the married Chief Van Alstyne are stuck in the freezing church basement, their closeness is more than an opportunity to keep warm. The mystery is not the main reason to read this book; rather, it is the chance to spend time during the spring with Spencer-Fleming's vivid characters in this small town in the Adirondacks.

On a dark night early in the Easter Week of the Greek Orthodox Church, part of the body of the larger Eastern Orthodox Church, a saintly monk is cruelly murdered on the winding streets of Patmos, an island in Greece. 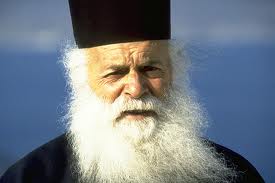 In Jeffrey Siger's Prey On Patmos, the crime was heinous not only because of the nature of the victim, but because it happened during a holy time and in a holy place. Patmos is in the eastern Aegean and it is here, in a cave almost 2000 years ago, that Saint John wrote the apocalyptic Book of Revelation. It has a small police force of its own, but in an unusual case like this one, which many would like to attribute to muggers, Chief Inspector Andreas Kaldis of the Special Crimes Division is called to take over the investigation.

In the Greek Orthodox Church, Easter is the most important day of the year. Easter week is the week preceding Easter day. Tourists flock to places such as Patmos and Mount Athos, another religious site that contains 20 monasteries that have been there 15 centuries.

Mount Athos is a self-governing monastic state that is vaguely a parallel to Rome. The monasteries all have one representative to a central Holy Community. And the leader of this group is known as the Protos. Ultimately, the head of the Eastern Orthodox Church resides in Istanbul––once known as Constantinople––Turkey. At this time, the Turks have passed new laws whose final effect will be to push the central leader and his organization out of Turkey, from whence it will be moved to either Russia or Greece. Naturally, the Greeks prefer this latter scenario and the politics surrounding this move are at once complicated and devious.

Solving this murder is going to be difficult because initial findings mean that Kaldis must be privy to the inside workings of the monasteries, and most abbots believe in keeping their own counsel. It is found that the dead monk had been investigating a complex power play within the Church. Andreas and his associate have an uphill battle, as they use every source in their power to find a killer hidden deep in monastic life, surrounded by many people who think he is just an ordinary––or maybe an extraordinary––monk.

Grace Brophy's novel The Last Enemy also takes place at this time of year, but in the location of beautiful Assisi in northern Italy. The evening of Good Friday is traditionally spent observing the procession of many local men and some women carrying a cross through the winding ancient streets of the city as they do penance to shorten their way to heaven after death and as a reminder of a momentous Friday 2000 ago.


1 Corinthians 15:26
The last enemy that shall be destroyed is death. 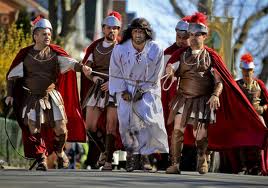 While Count Casati and his family watch the procession in a piazza near their home, they wait for a traditional fish dinner and for a little beloved niece, Rita, who has been residing with them since she brought her mother's body to be buried in Assisi. They wait in vain, because Rita has met her death in the family mausoleum. She is found the following morning resting on a stone altar step and posed in a fashion that suggests she was raped.

Because of the prominence of the family involved, Commissario Alessandro Cenni, the head of the special task force that deals with terrorism and politically sensitive domestic crimes, is assigned to bring about a fast resolution to the case. While he finds that the local police and the powers that be want the blame to settle on either a foreigner or a vagrant, Alex is confident that the killer had to have known the victim well––and that puts the powerful Casati family in the spotlight. But this is Italy, where connections are more powerful than the facts. The story moves at a lively pace and ends with an Italian twist.

Brophy transports the reader to a lovely part of Italy that I hope to be able to see one day. Alex Cenni is an intriguing, complex character who is believable, likeable and a bit of a romantic. I am happy to report that there is more to this series, the latest of which is being released this year.

Louise Penny takes a lighter approach to the Easter holidays as The Cruelest Month begins with an Easter egg hunt, which is part of the Easter ritual practiced on this side of the Atlantic. This title also comes from a quotation by a favorite poet of mine, T. S. Eliot.


"April is the cruelest month, breeding
Lilacs out of the dead land, mixing
Memory and desire…"

Shakespeare also used the phrase, but when Penny uses it she refers to the fact that not all things come to life in the spring; some things die or are murdered. In this case, a psychic visiting the Canadian village of Three Pines is persuaded to lead a séance at the spooky old Hadley House and one of the townspeople in the circle appears to have died from fright. Holding a séance on Easter Sunday turned out not to be a good idea. 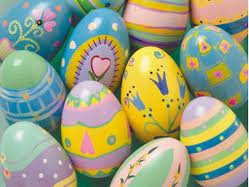 Chief Inspector Armand Gamache returns to the lovely area to investigate the death. As in all his cases, he works with a delicate, intuitive touch. He is a bit hampered on this occasion, because there is a plot afloat within the police intended to discredit Gamache, in addition to which he has become aware that one of his team is a mole reporting on all his actions to someone in the Montreal police hierarchy. Nonetheless, this consummate professional resolves these situations before Easter week is out.

These mysteries take you from the very solemn to the fun in a way in a way that only a good book can do. You can appreciate and enjoy different forms of Easter celebrations––all without moving beyond your doorstep.

Posted by Material Witnesses at 7:37 PM