A few months ago I was thinking about the unexpected turns life can take when I spotted the following news item:


"My ultimate dream is to be buried in a deep ocean close to where penguins live," explained the former Alfred David, 79, otherwise known in his native Belgium as "Monsieur Pingouin" (Mr. Penguin), so named because a 1968 auto accident left him with a waddle in his walk that he decided to embrace with gusto. (His wife abandoned the marriage when he made the name change official; evidently, being "Mrs. Penguin" was not what she had signed up for.) Mr. Pingouin started a penguin-item museum that ultimately totaled 3,500 items, and he created a hooded, full-body black-and-white penguin outfit that, according to a September Reuters dispatch, he wears daily in his waddles around his Brussels neighborhood of Schaerbeek. [Reuters, 9-29-2011]

Unlike Mr. Penguin, Sophie Marx's unusual life doesn't result from a fluke accident, but an unconventional upbringing. She was born to parents who were always on the run––from whom, Sophie was never sure. All she knew was that there were many things she couldn't talk about with anybody. So it isn't entirely surprising that she ended up at the CIA, "a building full of weirdos." It was the first time she felt completely understood.

When David Ignatius's Bloodmoney opens, Sophie is no longer working for the "mainstream" CIA. She has been recruited by Jeff Gertz to be part of an off-the-record CIA intelligence unit that he operates out of Studio City, California, under the guise of an entertainment agency, The Hit Parade. Sophie is sending field agent Howard Egan off to Pakistan, where he is to meet with a Pakistani asset. Egan is afraid to go and afraid to ditch the mission once he arrives there, for fear he'll be fired. Turns out he had good reason to be afraid, because he goes missing.

It's a bad week for The Hit Parade, as several other Hit Parade undercover agents are killed overseas. Gertz has to answer to the President's Chief of Staff and a superior in the CIA. How have these agents been uncovered? Gertz is concerned that his agency will be closed. At his request, Sophie investigates in Pakistan and at Alphabet Capital, the London hedge fund that provided Egan his cover.

Ignatius, the author of Bloodmoney, is an associate editor and foreign-affairs columnist at The Washington Post. Bloodmoney's intelligence-agency characters, whether working for Pakistan or the United States, are very believable. I must glumly conclude that I'm not nearly subtle, crafty or sophisticated enough to work in intelligence, either in the field or at the home agency. I enjoyed following Sophie as she learns about global finance at Alphabet Capital, although the close friendship that quickly springs up between her and the fund's manager seems a bit unlikely.

I wasn't surprised to read in this book about the U.S. government's failure to learn from other countries' (or its own) mistakes in the Middle East, and its tendency to ignore long-term policy in favor of short-term fixes like hosing the region with money. Although this is fiction, Ignatius provides insights into the tribal culture of Pakistan. I found Bloodmoney fascinating for that reason, as well as how entertaining it is as espionage. Days after reading it, I'm still thinking about the murky ethics of gathering intelligence and the terrible nature of the wars in Afghanistan and Iraq. I highly recommend it.

Let's segue now from Ignatius's intelligence people to the classic rock jocks of Bill Fitzhugh's Radio Activity. I can't recall how Fitzhugh's Rick Shannon became a radio station DJ, whether it was by accident or design. It may be that he became one because Fitzhugh was one in Jackson, Mississippi, in the 1970s. Don't ask me how Fitzhugh found himself in that spot.

Back to the book. As Radio Activity begins, Rick is unemployed. Again. Clean Signal Radio Corporation has bought another radio station and fired all the staff at the Bismarck, North Dakota FM station where Rick worked. A satellite feed will now bounce in voice-tracked jocks from Chicago and Florida. Rick and all the other DJs of his era "were like silent movie stars at the dawn of the talkies." A call offering him a job from Clay Stubblefield, manager of a station in a small town in Mississippi, catches Rick when he's reduced to selling his prized vinyl records. Rick isn't thrilled but he decides to take it.

When he arrives, Rick learns that he's been "Stubbled." He will have to do programming in addition to his night-time FM DJ shift for no additional money. He'd leave, but where would he go? Had Rick known what I knew from page 7, that Captain Jack, the DJ he's replacing, was handcuffed to a fence, pleading for his life while a backhoe dug a hole big enough to hold his corpse, Rick might have left any way. But maybe not. Rick has the chance to formulate his station's classic rock programming. His fellow jocks are good people. Captain Jack left a double-wide trailer full of wonderful records and that's where Rick will live. Plus, the station's sexy receptionist Traci has blue eye shadow that reminds Rick of his younger years and makes his knees weak. Not to mention Kitty's restaurant, which serves tater wads and other non-chain food.

Rick finds evidence that makes Captain Jack's disappearance look very suspicious, and he follows clues that lead to a solution of the crime. I've read more complex mysteries, but I've never read one in which music is so well integrated with the plot. This book is beguiling entertainment and a love offering to classic rock and roll. Defining the era. Describing how DJs perform their craft. Relating stories about the singers. Commenting about the songs, and not just the 50 songs you hear over and over on homogenized classic rock stations. I loved it. It made me anxious to listen to music I've almost forgotten I miss. If you are a fan of mysteries and classic rock and roll, embrace an opportunity to read it. Crank up your stereo and rock out. 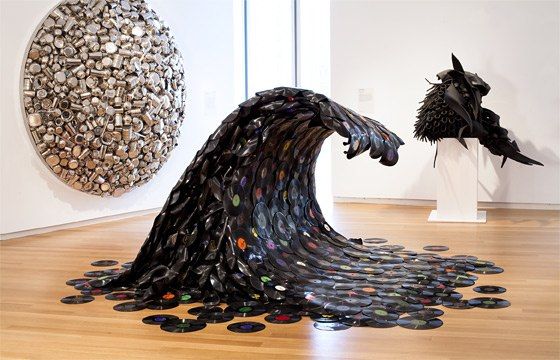 P.S. Rock and rollers, if you want to read some great set lists, check out Fitzhugh's All Hand Mixed Vinyl.
Posted by Della Streetwise at 4:00 AM