Robin Hood. Liberal Democrats. Donald Westlake's Dortmunder. These folks aren't related. What do they have in common? They all want to take money from the super rich. Granted, Dortmunder doesn't want that money for the poor. He only wants to redistribute it to his own pockets. But Dortmunder's targets are institutions, bad guys or people who won't starve without the money and no one can be blamed for cheering him on.

Likewise, it's easy to root for Carr and his gang in Peter Spiegelman's Thick as Thieves because the filthy rich in Carr's crosshairs are so disgustingly filthy. They are mean and despicable people. Their money comes from human trafficking, illegal money operations and the drug trade.

It was relatively simple to steal money from fictional rich people like these 50 years ago. Using dynamite on their personal safes or somehow finagling their Swiss bank account information did the trick. Now, fancy-pants computer theft allows accounts to be stripped of millions without even changing out of PJs. A writer's goal is to make it both plausible and exciting.

It's all I can do to figure out email and to make hotel reservations online, but you don't need to take my word for it that Spiegelman knows what he's doing. He worked in financial services and software industries for decades. Nice for us he didn't use this time to become a crushing bore before turning novelist. Spiegelman has written a series about John March, a private detective who comes from a family of merchant bankers. In his first standalone, the suspenseful Thick as Thieves, Carr and his fellow crooks want to pull one last heist so large it will allow them to retire. If they fail, the dead don't need money for retirement. 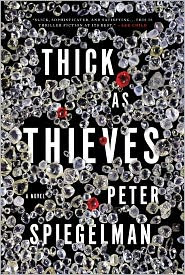 Carr isn't the type one would expect on the law's wrong side. At one time he worked for the CIA. The CIA fired him because they didn't entirely trust him. Then Carr was fired from his private security job for hitting a client, and the charismatic Declan recruited him for a life of crime. The group's dynamics worked well. Carr, detail oriented, ran operations. Dennis, the string-bean, was the computer expert. Bobby and the short-tempered Latin Mike were experienced at physical break-ins. Valerie, a beautiful chameleon-like woman, played a Mata Hari type of role. The group's camaraderie was shattered before Thick as Thieves begins when a night in Mexico went catastrophically wrong and they lost two members of the gang, including Declan. As the new leader, Carr has few of Declan's people skills. The group members are barely getting along and it doesn't help morale that Carr ruminates about that night in Mexico. Valerie has moved into his bed and, after seeing her ply her charms, he questions whether she is playing him too. Carr doesn't know whether he can trust the others. The skills he applies to analyzing crime schemes don't translate as well to analyses of himself or his colleagues, but he doesn't have much time for that. The big scheme needs everyone's attention. It involves a series of crimes, extorted cooperation and split-second timing. Carr's paranoia makes him worry about whether everyone will not only live through the heist itself, but its successful aftermath.

None of the crooks in Thick as Thieves are related by blood but this elegantly written book looks at the ties between them. It's much more than just a thriller involving computer theft and money, although the crime is an agreeably intricate and dangerous one. This is an outta sight read.

Posted by Della Streetwise at 8:34 AM