Would you guess that this middle-aged administrator with the receding hairline was actually the general who conquered most of the known world and founded the empire that would shape Western civilization for all the ages since?


The Rome of Julius Caesar and his heirs was a wonderful place to live––if you were rich and a man. The Paterfamilias of a family had control over his wife and sons throughout his life, even to forcing or forbidding their marriages and divorces at any age. Daughters were married off early, for political or pecuniary advantage, and became chattels of their husbands.

Except in cases of treason or blasphemy against the state religion––which were always prosecuted by the state––obtaining justice was the responsibility of the wronged party. There were no police, but those who could afford them hired or purchased enforcers who protected them from criminals. If someone murdered your relative or burgled your house, you could seek justice by prosecuting or suing them in court. Collecting evidence and hiring a good prosecutor was up to you. The best evidence would probably have come from slaves, who were everywhere and saw everything, but a slave's evidence was only admissible in court if he had been tortured to obtain it. In the circumstances, not too many slaves were willing to acknowledge knowing anything about anything!

Decius Cecilius Metellus is the son of an illustrious Senatorial family in John Maddox Roberts's SPQR mysteries set in the last days of the Roman Republic. Like other sons of ancient noble families, he is expected to make his career in the army and politics, looting and extorting money from the provinces he governs to improve the family's fortunes, before eventually inheriting his father's seat in the Senate.

When he serves as secretary to Julius Caesar during the Gallic campaigns, Caesar finds his curious 'trick' of deductive logic so useful that he marries his favorite niece, the feisty and intelligent Julia, to Decius. The series follows Decius and Julia to their postings throughout Rome's far-flung holdings around the world. I have enjoyed following this sophisticated Nick-and-Nora-like couple in their adventures and investigations, and absorbed a fair amount of ancient history in the process. 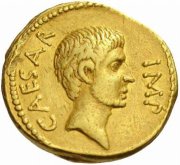 Steven Saylor, in addition to his highly readable historical epics Roma and Empire, has written the award-winning Roma Sub Rosa mystery series featuring Gordianus the Finder. Gordianus, unlike Decius, is an ordinary middle-class plebian during the rise of Julius Caesar, who turns his powers of observation and deduction to criminal investigation. He lives with his exotic Egyptian slave and bed-mate Bethesda, and other slaves as he can afford them, in a large and expensive-to-maintain house inherited from his father. In the second book, Arms of Nemesis, he travels with his adopted mute son, Eco, to the resort city of Baiae where a relative of the fabulously rich Crassus has been murdered, possibly by a pair of slaves. In accordance with his ancient legal right, Crassus plans to have every single one of the hundred slaves in the household publicly executed after the funeral unless Gordianus can prove that no slave committed the crime. This series offers a nice balance of complex, often politically-motivated mysteries with a sense of the lives of more ordinary Romans of the period. The Seven Wonders, a prequel to the series, is due out in June. 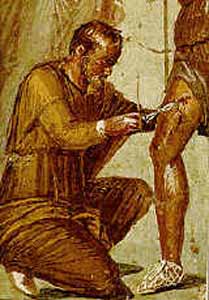 Gaius Petreius Ruso is a grumpy, recently divorced Roman army physician serving with the troops in Britain in Ruth Downie's Roman Empire series. In the first book, Medicus, Ruso finds himself posted to a filthy ramshackle outpost run by an incompetent chief surgeon. The badly abused slave girl he cures and buys can't cook, won't even speak to him, and runs away as soon as she is well enough. And no one seems interested in stopping the murders of the women at the local bordello. While things look up a bit from there, Ruso's life is rarely sunshine and light in this gritty, wryly humorous series. This story, with its strong images of mud and blood under perpetually rainy skies, could make a very interesting Masterpiece Mystery episode.

Completists beware! All of the four novels (so far) in this series have been published under different names and with different covers in the UK and the US. I bought one twice without realizing it.

Wise-cracking PI and sometime imperial agent Marcus Didius Falco comes from the lowest rank of citizens, the proletarii, in Lindsay Davis's popular humorous noir series set during the reign of the emperor Vespasian. Since this was a quieter period under a relatively sane emperor (some were!) the series lacks some of the high political intrigue, slave uprisings, and wars that enliven the other series. Despite the wealth of period details, the characters in this series, like Downie's, are much more modern in attitude and outlook. His endlessly demanding family and their ongoing crises occupy a lot of Falco's efforts in these stories, as do the members of the noble family whose daughter, Helena Justina, he meets in The Silver Pigs. The mysteries in this series often take second place to the ongoing amusing family sagas, both high and lowborn, that afflict the couple.

These protagonists operated within a very different framework for the solution and punishment of crime than we expect today. Might and wealth almost always made right, and ordinary citizens had no official advocates or protection for their families and property. Slaves owned nothing, not even their own lives, which could be taken from them legally at the whim of their masters. For most of the population, it was a grim and chancy age, which makes for some tangled and thought-provoking mysteries for the curious reader of today.