"Go to Heaven for the Climate, Hell for the Company" (Mark Twain)

Mark Twain must have spent a lake vacation with my family, our friends and miscellaneous pets. As soon as we got out of the cars and smelled the water, we all ran completely wild. It was so much fun. There is nothing like spending time with friends and family you love. The books I read during the past few weeks have characters with special relationships, too. Let me tell you about some of them.

Author Edward Conlon's dad, grandfather and uncle were cops. Conlon graduated from Harvard, but his blood runs cop-uniform blue and he became a NYPD detective. Red on Red is his first novel and it's a doozy; a literary book you don't have to be a mystery fan to love. It's about two NYPD detectives, protagonist Nick Meehan and "Espo" Esposito, who became partners five months earlier. Nick, desperate for a transfer, agreed to take a look at Espo for the Internal Affairs Bureau. The two men are very different, but a close relationship or good partnership doesn't have to begin with a likeness, a shared past or shared tastes. It can begin with unlikeness that leads to thrilling epiphanies of jokes and actions one wouldn't have thought of but the other one did. During the first night a reader spends with them, they discover an unidentifiable woman hanging from a tree in the rain at Inwood Hill Park. The mysterious witness who called the cops and the odd scene appeal to Nick, who likes cases with "funny things or lucky things, glimpses of archaic wonder and terror, where life seemed to have a hidden order, a rhyme." They are also called to the scene of a shotgun victim, probably the result of a drugs turf war, that the aggressive and competitive Espo will handle. Espo and Nick accidentally cause a death to round out their shift. Fabulous characterization, setting, plot, humor and insight. I can't recommend this 2011 book, nominated for an Edgar First Novel, highly enough.

William Landay's Defending Jacob is set among the Barber family. Andy Barber couldn't believe his luck when Laurie, his dream girl, married him. He's happy at home and at the DA's office in Newton, Massachusetts, where he's been the top assistant DA for more than 20 years. When 14-year-old Ben Rifkin is found, stabbed to death on his walk to school, Andy expects to prosecute the case. These plans are turned upside down when Andy's son, Jacob, is accused of the crime. Jacob says he is innocent and Andy insists that it's his duty as a father to believe him. Laurie, reeling from the criminal charges against Jacob and the flabbergasting revelations from Andy, isn't so sure. This book has been described as a Greek tragedy. I'll say. It's both thought-provoking and suspenseful. Author Landay is a former district attorney and a Dagger Award-winner for Mission Flats. Defending Jacob, published in 2012 by Delacorte, is his third outstanding non-series novel. If you like books by Scott Turow, you'll like this one. 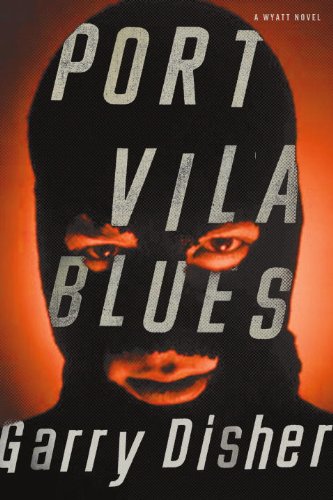 Austalian writer Garry Disher's Port Vila Blues was originally published in 1995 and will be re-released by Soho Crime tomorrow. In a nutshell, here's the scoop. Wyatt, a cool-headed career thief, has once again joined forces with his old crime-planner and trusted friend, Jardine. Six months earlier, Jardine was grazed by a bullet above his ear, suffered a stroke and hasn't been the same since. He directs Wyatt to a house with a stash of cash. Along with the cash, Wyatt finds a diamond-studded Tiffany brooch. He and Jardine then seek a fence. Unknown to them, the brooch was stolen before. When its original thieves hear it's turned up again, they assume someone among them is cheating the rest. This is not a comfortable state of affairs because they are very enterprising and ruthless corrupt cops. They set out to investigate their fellow friends-in-crime and Jardine and Wyatt. Port Vila Blues, the fifth in the Wyatt series, is set in various cities of Australia and on the island of Vanuatu. I'm not sure why it reminds me of those old Spy Versus Spy cartoons in Mad Magazine. It's not a book of espionage. Maybe because of the murderous scheming and betrayals among colleagues and friends. Chasing the determined crooks are determined cops. The book's ending makes me anxious to read others in this series, especially the next, The Fallout.

Shawn Maguire is ex-CIA. He was kicked out for his violent behavior, his insufficiently brown-nose-ish attitude and his drinking. He's now living in rural England so he can be near the grave of his wife. Other than attending meetings for sex addicts and running out of money, he's not doing much. An arms dealer asks him to look into the disappearance of Darius Osmani, whom the CIA suspects of being a Middle Eastern terrorist with information about a nuclear device. Although he hopes to be reinstated in the CIA, Maguire agrees to accept this freelance job. He heads to Paris, where he meets Osmani's beautiful wife, Danielle Baptiste. This isn't a thriller of blood-pressure-raising action, although Maguire and Danielle track Osmani, who's being flown from one black hole to another, courtesy of the CIA. Instead, it's a look at Maguire's history as a CIA operative in the Middle East during the war, CIA renditions and the short-sighted American practice of throwing money at problems and taking a hand in other countries' elections. The flashbacks within flashbacks can get a little confusing. Maybe that's appropriate. In Gerard Macdonald's The Prisoner's Wife, published in May 2012 by Dunne/St. Martin's, it's confusing to figure out who's a friend and who's an enemy, because sometimes it depends on the time and place. I enjoyed the quietly beautiful writing and Maguire, an appealing and complex protagonist. I hope to see him again soon.

There you go. I enjoyed my time at the lake with family and friends. After reading these books, I realized how lucky I am not to worry about which friends might sell me out or try to kill me. I don't suspect my kids of any serious crimes and I doubt my husband will drop a bomb on me. Now I hope you'll read these books in a heavenly place and the hellishly good company of the fictional characters will kindle your enjoyment.

Posted by Della Streetwise at 8:12 PM