Johnson's Life of London: The People Who Made the City That Made the World by Boris Johnson

No, the author isn't the occasionally outrageous 18th-century lexicographer and essayist Samuel Johnson, author of the first widely-accepted English dictionary, but is the equally literate and bombastic 21st-century Boris Johnson, journalist, historian and Mayor of London, the bicyclist with The Donald haircut and the unexpected gift for publicizing himself and his ancient beloved city.

A point about Johnson and his title: I was confused––doesn't London's mayor, in common with those of a few other ancient cities, usually have the title Lord Mayor? Oh dear, who has Boris offended now? But a bit of research informed me that London actually has two concurrent mayors. The position of Lord Mayor was established in 1189, with holders elected by the members of the ancient Worshipful Guilds of London. Lord Mayors govern only the city-within-a-city called the London Square Mile, historic heart of the financial district, and their duties nowadays are mainly ceremonial. Johnson, on the other hand, is only the second Mayor elected by all the citizens of the sprawling modern city of over eight million to represent them. After a thousand years, a bit of modernization was probably in order and, as the Olympic Opening Ceremonies last week reminded us, we can count on the British to keep one foot firmly planted in history even as they move into the future. 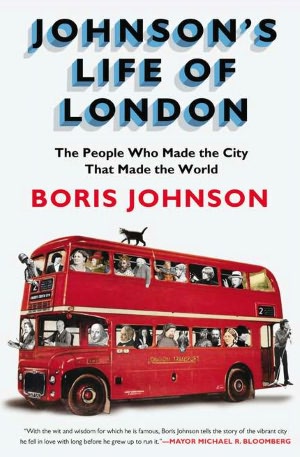 I had received a free review copy of hizzonor's Johnson's Life of London: The People Who Made the City That Made the World a while ago, but put it aside to read during the commercials and boring bits of the Olympics, thinking that it would be easy to pick up and put down. After all, history isn't that suspenseful; we already know how it came out and who won, right? Well, that almost worked. In fact, the book is so filled with pithy observations and fascinating sidebar stories that it made me quite unpopular as I constantly interrupted everyone in the room with "Listen to this!" during the competitions.

In addition to the historical greats you would expect in any history of London, Johnson offers us vignettes of some of the less widely-known characters who contributed to the life of the city. I had never heard, for instance, of Robert Hook. Most people know that Christopher Wren was the great architect who designed many famous London buildings. But after the Great Fire of 1666 destroyed much of the city, it was Hook's designs, not Wren's, that determined the future layout of the city. Despite his contributions to science and architecture, Hook's fame didn't even last his lifetime. Johnson relates his death in 1703 "Alone and wretched and covered with lice, with a reputation as a sexually peculiar old miser."

While the British have a long reputation for fair play and gracious sportsmanship, some gestures seem a little extreme, even for them. Around 60 A.D. the Iceni Queen Boudica, furious at the death of her husband and rape of her daughters at the hands of the London Roman garrison, invaded the city. Her troops burned the city to the ground and tortured and butchered its hapless inhabitants. The site remained a charred swamp for many years, until the Roman Emperor Hadrian rebuilt and fortified it. An enormous discarded head of Hadrian was hauled up by workers dredging the Thames in 1834, while this beautiful statue of Boudica stands proudly to this day on the Thames embankment. Go figure.

The book is chock-full of similar little known but fascinating bits of history. For instance, the invention of flush toilets is generally attributed to Thomas Crapper in Victorian London. However, Johnson informs us that they were actually invented by Sir John Harrington, a courtier and godson of Queen Elizabeth I. Sir John had been banished from London for translating and distributing lewd Italian verses among the ladies of the court of the Virgin Queen. Anxious to get back in her good graces, he designed a flushing porcelain throne for his fastidious monarch. While this grim looking fixture was actually built in a couple of her palaces, and presumably put its inventor back into Her Majesty's good graces, it did not catch on with the populace at large until Mr. Crapper's reintroduction many years later. 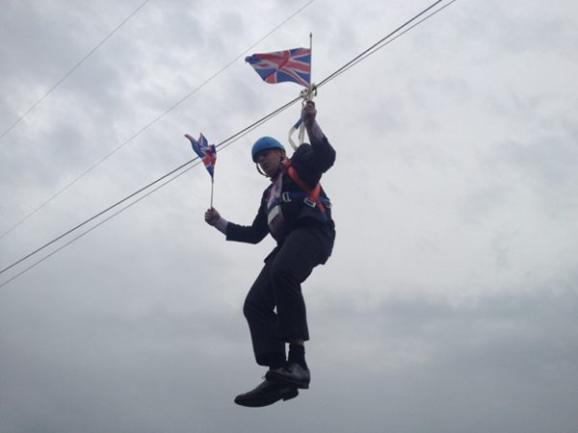 While a few of the author's claims and tales seem a little over the top, he is apparently prepared to go to any heights in his admiration for his "Mother of Cities." Last week, the pudgy but intrepid Johnson got stuck 20 feet in the air while ziplining across Victoria Park to celebrate Britain's first 2012 Olympic gold medal. He dangled in midair for several minutes, waving a pair of Union Jacks before plaintively demanding a ladder. Gymnastically, his performance would have to be counted an epic fail, but as a novel way of keeping the attention of the world on his city and its games, it was priceless. Dangling Boris instantly went viral and was featured on news broadcasts worldwide.

If you have some digital photographic editing skills and would like to dangle Boris yourself, BBH London Barn Crew@3crumpetsfull offers a couple of still images for your use. Hundreds of amusing variations have already been uploaded by enterprising photoshoppers. This is one of my favorites.

And if you want a lively, witty tour guide to provide an immersive accompaniment to your Olympic viewing, in either London or your living room, you might want to take Johnson's Life of London along. He's very good company indeed. However you go, enjoy the rest of the Olympics.

Note: I received a free copy of this book, which was published in May 2012 by Riverhead, in exchange for this review. Parts of it will appear on Amazon and Goodreads, under my user names there.