Life After Life by Kate Atkinson

Our protagonist is Ursula Todd, the third of five children of Harold Todd, a banker, and his young wife, Sylvie. They live in the English countryside, at a large house they call Fox Corner. We begin on the snowy 1910 night of Ursula's birth––which is also the night of her death.

It should make for an awfully short book to have the protagonist die on the same page she is born, but Ursula is an unusual sort of person. She makes a sort of habit of dying. Born dead, dead in her crib, dying multiple times as a child, as a young woman, and on and on. But, after each death, there she is again, with another chance to avoid catastrophe––at least the particular catastrophes that came before.

Ursula becomes anxious about the sense of deadly déja vu she sometimes has, while her family worries about her anxiety and about the odd and unpredictable things she says and does. The Todd family's maid, Bridget, says young Ursula has the second sight, but the psychiatrist she's packed off to see thinks she is an "old soul," and that her memories are of future events. If she is an old soul, does that mean she can devise a plan that will avoid these calamities, personal and more wide-ranging, that life seems to have in such plentiful supply?

Just as Ursula's life takes many different paths––or, I should say, lives take many different paths––there are different ways of reading this inspired novel. You may read it for the sheer pleasure of the story, which often resembles Nancy Mitford's The Pursuit of Love, a semi-autobiographical comic novel about the famous Mitford family, with their six daughters and one son, who were (mostly) Bright Young Things of the 1920s, and notorious in the 1930s and 1940s for their extreme (and violently varying among them) political views. Ursula's sister Pamela reminded me of Pamela Mitford, her brother Teddy of Tom Mitford, her aunt Izzie of Nancy Mitford. Several events in the book are reminiscent of those described in The Pursuit of Love and in nonfiction books about the Mitfords. There is even a brief reference in Life After Life to one of the Mitfords, which made me think that the resemblances between the Todds and the Mitfords wasn't accidental. (But let me be quick to say that you don't have to have any familiarity with the Mitfords or to have read The Pursuit of Love to appreciate Life After Life.) 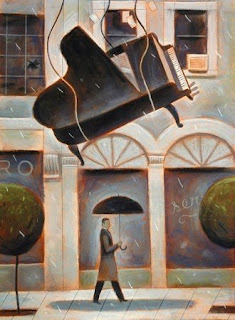 Reading any Kate Atkinson novel just to enjoy the storytelling is rewarding, because she has a gift for narrative; capturing the tragic comedy of life, where history and circumstance make all of our plans foolish. Her stories nonchalantly gambol along, even amidst brutality and grim death. Like Pogo, Atkinson seems to believe that life ain't nohow permanent––so we might as well get the most out of it all, even its grotesqueries.

Atkinson makes it easy to fall in love with her characters, despite––or maybe even because of––their flaws. And Atkinson's depiction of time and place are so vivid I felt I was there on the terrace at Fox Corner with the shadows lengthening on a summer evening; there building sand castles on the beach with the Todd family; there in London with Ursula during the relentless bombing of the Blitz, and the endlessly cold and gray days after the war, when continued scarcity of food, gas and electricity made life as bleak and grinding as wartime––except without the excitement of the bombing and the feeling that every day of survival was a blow struck against the Nazis.

But while you're reading this Mitford-esque, but oh-so-Atkinsonian, story, it's hard not to get caught up in the intricate structure of Atkinson's clever plot. I found myself paying careful attention to the chapter titles, and poring over the table of contents to study the construction of the book and tease out hidden meanings. When you read it, as I hope you will, make sure to draft some friends to read it at the same time, so that you can talk about Ursula's lives, how one's actions affect the course of one's own life and those of others, whether you would want to have multiple lives yourself and what you might do with them.

Wry, suspenseful, thrilling, poignant and thought-provoking, Life After Life is a delightfully fresh and inventive novel that should make many 2013 best books lists, and very possibly become an enduring classic.

Life After Life will be published in the US by Reagan Arthur Books (an imprint of Little, Brown and Company) on April 2, 2013.

Note: I received a free publisher's review copy of this book. A version of this review may appear on Amazon, Goodreads and other review sites under my user names there.
Posted by Sister Mary Murderous at 9:22 AM