"The past is never dead. It's not even past."

Should we believe in coincidences? I believe I should. Lately, I picked up several books in a row that all repeated a similar theme. It meant either that plenty of authors have similar dreams, or my reading picks are not as random as I thought. It may also be a sign that I am meant to write about these books. Their main idea is that what goes around comes around, and what you did during World War II will come back to haunt you, no matter where you did it. It is usually Sister Mary who has the goods on skullduggery during the Second World War, but I will trespass just a little bit today. 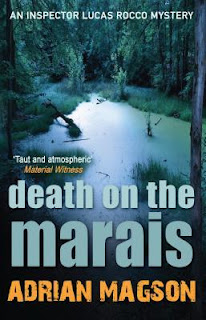 William Faulkner said, "The past is never dead. It's not even past." This quotation might be the best part of his Requiem for a Nun and it really came to mind with Death on the Marais by Adrian Magson.

Marais is the French word for marsh, or quagmire, and that is what Inspector Lucas Rocco finds when he is transferred from his Paris job to Poissons-les-Marais. He had been a Paris policeman for a long time when a new broom in the Interior Ministry felt that the more rural provinces needed some Parisian expertise in law enforcement. Rocco was exiled to this country village in Picardie, a northwestern province of France. His superiors had a few interesting things to say of him, like that "he was an insubordinate bastard, insolent as well as pushy, dogmatic and a nobody, reckless … a rebel. A good cop, though."

Rocco expects the new assignment to be quiet, uneventful and maybe boring, but he doesn't expect that the first thing he will run into in the village is a crowd pulling a dead woman from the marsh at the edge of a war cemetery. The shocker is that she is wearing a Gestapo uniform––when World War II has been over for 20 years. 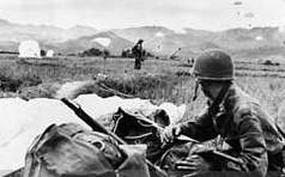 This novel is set in the 1960s, and Rocco's war experiences are of another war, not World War II. He spent his army days in the jungles of Indochina during the conflict between the French and the Vietnamese, after France reoccupied the area after World War II. He had developed sharply-honed survival skills that come back to him as he negotiates the treacherous bogs of the marais, as well as the vagaries of the locals as they once again align themselves into separate camps of collaboration and resistance.

Once the woman is identified as the daughter of a well-connected wealthy man named Phillippe Bayer-Barbier, Rocco heads back to Paris, following the trail of very dirty secrets. The detective is astounded at the man's reaction to his daughter's death. Bayer-Barbier begins to lie and then distance himself, behaving as if she brought this on herself. He is a man with many skeletons in his closet, most of them nasty, and most of them having been buried during the war.

There is an interesting cast of ancillary characters in this village: the local policeman, a tramp whose expertise is defusing bombs left over from the war, as well as several people who service a small mansion where Parisian men come for nefarious, mostly sexual, purposes and perversions. Rocco doesn't know whom to trust, and the seemingly calm waters hide dangerous undercurrents. The mystery is exciting and as murky as any marais, and what has happened in the past lies bubbling just under the surface.

The dogs of this war refuse to lie down in other countries as well. In Italy, there is still a pas de deux featuring people who took different sides in the war, and who still distrust each other, but now must perform together amicably. 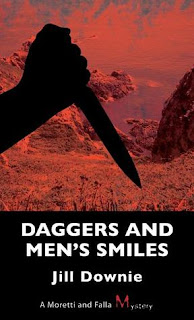 Jill Downie's Daggers and Men's Smiles begins in Guernsey, a Channel Island that was the site of great German fortifications and an Organisation Todt forced-labor camp in which prisoners were worked to their deaths. Detective Inspector Ed Moretti returns from a trip to Italy to find that while away, he has been assigned a new female partner, DC Liz Falla. There is also an international production company on the island, making a movie based on a bestselling novel about an aristocratic Italian family at the end of the Second World War.

The novel is called Rastrellamento and dramatizes a military round-up of partisans who had been betrayed to the Nazis. Guernsey's cement bunkers, underground command post and hospital make for excellent film locations, and the cream on the pie is that the manor house is still inhabited by expatriate Italians, the Vannonis.

Ed Moretti himself is of Italian heritage. His father was a prisoner of war in the Todt camp and his mother was a native Guernsey girl who risked her life to give him food. After the war, he came back and married her. Ed speaks Italian and this is of help when a series of murders shakes up the island. 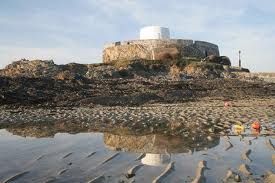 First to die is the philandering son-in-law of the Vannonis, and then the pompous author of Rastrellamento. The striking feature of both murders is the use of a ceremonial dagger similar to one on the Vannoni coat of arms.

There is quite a bit of mystery surrounding the Vannonis, and the past is never spoken of. The solutions to the crimes lie in Italy and in what went before. The Vannonis were, at one time, involved with Mussolini, fascism and more. Moretti goes to Italy to find his answers.

Both Death on the Marais and Daggers and Men's Smiles are the first in a series. I liked Rocco, Moretti and Falla. Both of the Guernsey cops moonlight musically in the evenings, when they have free time. Ed plays a mean jazz piano and Liz is a folk singer with an Enya sound.

Even in the US, the echoes of the World War II past come back like ghosts. In Desert Run, by Betty Webb, the mystery is fashioned on some of the real events surrounding the German POW camps in Arizona. A documentary is being shot at Papago Park about the German POW camp that had been located there, and the "Great Escape" of Christmas Eve, in 1944. The film is to tell the story that during the autumn months, the prisoners dug a tunnel under the desert floor to a nearby river, which the escaping Germans planned to use to transport themselves to Mexico.

With the help of a map, which appeared to show that a nearby river flowed all the way to Mexico, and under the cover of singing Christmas carols, 28 escapees went under the fence. They soon discovered that in the Sonora Desert, rivers are usually dry and go nowhere. Most escapees were recaptured in days. 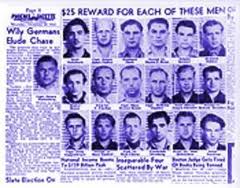 One surviving escapee, Kapitan Erik Ernst, is now 90 years old and about to be interviewed about these past events. Before he can speak his piece, he is murdered. Scottsdale PI Lena Jones is doing security for Warren Quinn, the director of the documentary. Both Quinn and the Ethiopian caregiver, who has been accused of Ernst's murder, want Lena to find his killer. The answer may lie in the past.

During the escape, three men separated from the others, who were recaptured. Ernst was among the three who avoided immediate recapture. They fled into the mountains, where they were suspected of brutally murdering a local family. Another suspect in Ernst's death is Chess Bolinger, the only member of the family to survive the massacre. He had plenty of motives to kill Ernst, because he had been living under the suspicion of being the murderer of his family as well. And he knew the truth. 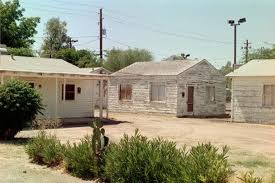 Nothing is known of the other two men who were with Ernst, and Betty Webb weaves an intriguing tale about what happened to these men. In a postscript, she gives the reader a short history of the POW camps, the 1944 escape and the recapture off all of the 25 escapees. She mentions that several former POWs moved to Arizona after the war. In 1985, there was a reunion of former POWs at the site, which is now part of the Oakland Athletics training fields. 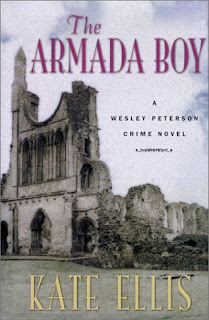 Out of the blue, the next book I picked up was Kate Ellis's The Armada Boy, which tells a tale of a D-Day veteran returning to England for a reunion.

Fifty years after D-Day, a group of elderly Americans have returned to the Devonshire town of Bereton, where they had prepared for the Normandy invasion. One of the old soldiers, Norman Openheim, is found murdered on the grounds of an old chapel where the GIs used to meet the local girls for romantic encounters.

The people of the area have long memories––many of them good, but most bitterly recall that their village was taken from them by the authorities, and when they return, it was a shambles. It was no secret that the GI influence over the local girls was resented. 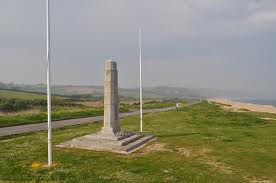 It seemed also that Norman might have left more than just memories behind. His wartime girlfriend was pregnant when he was recalled to the US. Norman's wife does not seem particularly saddened by his demise when Detective Sergeant Wesley Peterson begins his investigation by interviewing her. Motives swirl around this case, because one of the reunion party is suspected of raping a local girl and one of the GIs was supposed to have shot a local man who was poaching in an out-of-bounds area. Yes, indeed, the past is where the answer is to be found for this death in the present.

The historical facts of the matter were that there was an area of Devon evacuated at the end of 1943 so that the US troops could rehearse the D-Day landings there. All the local people and their animals were evacuated and had to find alternative places to live. There is a memorial on Slapton Sands in South Devon to the American troops who died during Exercise Tiger, a practice for the D-Day landings held in April 1944. Nearly 800 men (more than the number who died during the actual invasion of Normandy) were killed in the exercise, one of the great tragedies of World War II.

I began with Faulkner and end with Faulkner, who really understood the past and the present. "It's all now you see. Yesterday won't be over until tomorrow and tomorrow began ten thousand years ago."
Posted by Maltese Condor at 4:00 AM