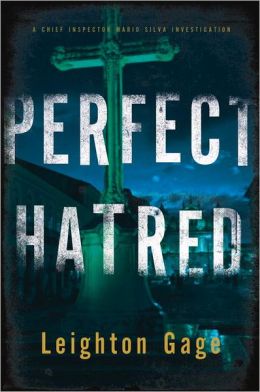 Want to get to know Brazil, without leaving your living room sofa? Meet Leighton Gage's Chief Inspector Mario Silva. He's the guy the Brazilian Federal Police send when a criminal matter requires their biggest gun. Silva is incorruptible, yet pragmatic. You can catch him and his crack investigative team on February 19, 2012, when the sixth Mario Silva series book, Perfect Hatred, is published by Soho Press.

The book opens with a literal bang––Salem Nabulsi's particularly nasty suicide bombing outside the American consulate in São Paulo. At least 67 people are dead. The Civil Police open their investigation. Delgado Hector Costa, who heads the São Paulo field office of the Federal Police and just so happens to be Silva's nephew, phones Brasilia. Silva, his sidekick Arnaldo Nunes, Danusa Marcus, Lefkowitz, Mara Carta, and Babyface Goncalves don't even have time to analyze the explosive's taggants or the consulate's security camera tapes before Silva is rushed off to another case.

A candidate for the state governorship of Paraná, Plínio Saldana, has just been assassinated at a campaign rally in the capital city of Curitiba. Saldana's campaign slogan was "Sweep Paraná Clean," and he had plenty of enemies. The shooter, Julio Cataldo, is dead, after exchanging gunfire with Nestor Cambria, a former federal cop who's now Saldana's bodyguard. Cambria was wounded and is hospitalized. Despite the São Paulo terrorist attack, which is followed by an explosion at a Buenos Aires synagogue three days later, Brazil's Minister of Justice insists the Federal Police's best team investigate the Saldana assassination. Silva steams, but he has no choice. The Minister owes the current Paraná governor, widely considered a crook, a favor. And, as Arnaldo observes, "'In case you guys never noticed, politics and favoritism is what Brasilia is all about.'"

As if two high-profile cases aren't enough, writer Gage tosses Silva a stark-raving Orlando Muniz, out on appeal after his conviction for murdering a penniless, unarmed priest. In the Brazil Muniz knows, wealthy men don't go to prison, and he will kill the incorruptible prosecutor and the witness/arresting police officer, Silva, if he has to. Heck, Muniz would enjoy killing them even if he doesn't have to.

While Gage is an American, he's lived in São Paulo for decades and has a Brazilian wife. His Perfect Hatred isn't a cozy; rather, it's a hardboiled police procedural involving social issues. The meaning of Psalm 139:22 ("I hate them with perfect hatred: I count them mine enemies.") is examined against the backdrop of contemporary Brazil and her international relations, especially with Paraguay. Widespread corruption, incompetence, and nepotism in government and law enforcement agencies set the stage for three seemingly unrelated crimes: a fanatic Islamist's suicide bombing, an assassination with political or personal motivations, and a criminal's revenge. Gage spins a dazzling web of people, motives, and events to connect them.

It's not necessary to start at the beginning of the Chief Inspector Mario Silva series with Blood of the Wicked. People who appreciate crime fiction with a social conscience, featuring memorable characters and unique settings, will enjoy Perfect Hatred. I did.

Note: I received a free prepublication review galley of Perfect Hatred from Soho Press. Check it out a week from today.

Posted by Georgette Spelvin at 8:27 AM