Review of Serge Quadruppani's The Sudden Disappearance of the Worker Bees

We're already flabbergasted by the ongoing shutdown of the United States government, which keeps many federal workers home, so why not look at another perplexing workers' disappearance?

Colony collapse disorder involves the sudden vanishing of worker honey bees from their hives. While the queen bee continues tirelessly laying her eggs, there are no workers to provide food for the colony. The cause of CCD isn't clear. Because pollinating bees play an essential role in the world's food production, this mysterious new syndrome is receiving a lot of attention. 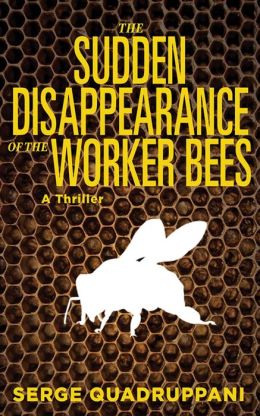 Honey bees are at the heart of Serge Quadruppani's The Sudden Disappearance of the Worker Bees, published on September 3 by Arcade. The story begins when vacationing Commissario Simona Tavianello and her husband, Marco, a recently retired police chief, pay a visit to Giovanni Minoncelli's honey shop in Italy's Piedmont region. The long-married Tavianellos are both stubborn and, despite their deep love for each other, they often resemble two rams with their horns locked. Their relationship—already frosty because Simona is resentful that they're vacationing in the mountains rather than at the sea—drops a few more degrees when her attempt to open Minoncelli's door is blocked by a corpse on the floor inside. Nearby is a piece of paper that proclaims, "THE WORKER BEE REVOLUTION." It turns out that beekeeper Minoncelli is a militant environmentalist well known to the police, and the dead man, Bertolazzi, was an engineer with Sacropiano, a corporation involved with genetically modified organisms and pesticides. But the case is more complex than it looks at first glance. Minoncelli has an alibi for the time of the shooting, and the gun used was the one Simona had left in her hotel room. Therefore, she feels an obligation to assist Maresciallo Calabonda, whose life was made miserable when the local newspaper welcomed him to Torre Pellice by misspelling his name as "Cacabonda," and the name stuck. Calabonda is happy to have the help of Simona, famous for her work with the National Antimafia Commission, as long as she is willing to let Calabonda take the credit. It isn't long before Simona is convinced that the mountain air leads to lunacy, as crimes mount, identities are mistaken, and immigrants are misunderstood. She interacts with one eccentric technophile after another, including an extremely shy newspaper reporter named Felice, who is passionately interested in a neural network software program applied to crime scenes; a cranky coroner; and the expert on bees, Prof. Aldo Martini, described as a "huge, lanky insect."

In fact, people described in animal terms is only one aspect of a theme in this book: how humans are just one cog in nature, but they're mucking up the whole works. Hikers make their way up into the "great embrace" of the mountains, but all the valley's toxic emissions are captured in the snow of the mountain peaks, where cows in their pastures look down on the world with "sweet, fly-encircled, melancholy gazes." Deer pause, looking askance at what humans are doing. For a short time, we see the world through the eyes of a tiny Slovenian worker bee. She is depicted in such gorgeous sensual terms one dreads anything bad happening to her; it's writing like this that makes CCD seem a personal tragedy.

In addition to the witty and beautiful passages about nature, there are mouth-watering little moments devoted to food. Marco is Neopolitan and proud, but he's curious about "exotic" cuisines, which for him begin about 20 miles outside of his home city, and he is tormented by the thought of Simona enjoying good food and drink without him. I was tortured, too. It was all I could do not to hit the wine aisle at the nearby grocery store after reading about "the cheerful scent of violets wafting off the plaisentif cheese and mingling with the bouquet of that same delicate flower in a bottle of Barolo Fossati 2000."

Quadruppani's English crime-fiction debut is charming; at 203 pages, it left me wishing for more fleshed-out sequels. It reminds me a bit of Margaret Atwood's dystopian trilogy in its obvious love of nature and cautious stance toward corporations, and of Andrea Camilleri's Salvo Montalbano books in its squabbling characters and leftist takes on the exploitation of immigrants, the sad state of investigative journalism, and the corrosive power of governmental bureaucracies.

We should all be concerned about what happens when capitalists and governments get their hands on miraculous scientific breakthroughs in nano-, bio-, and computer technologies. The very nature of living things, including humans, is vulnerable to modification in both good and evil ways. Modifications might look beneficial but carry unforeseen consequences. I appreciated The Sudden Disappearance of the Worker Bees as entertaining crime fiction, but mostly for the questions it raises about the artificialization and commoditization of all natural organisms.
Posted by Georgette Spelvin at 4:00 AM