Books in Their Stockings?

Don't hate me, but I'm almost done with my Christmas shopping. I like searching for the perfect gift, especially if it's a book. It's even more fun to talk with my book-loving friends about books for giving. Here are some gift books I've been buying, along with some I've been talking about for presents with my friends.

I have a World War II veteran in my life who had what they call a "good war." He never had a serious injury, was never under fire (he was a radio operator) and he went to a lot of places in the world that a midwestern farm boy never expected to see. He loves revisiting his war years and most enjoys getting books about the war and about science, his postwar career.

This year, he's getting (hey, buddy, if you're reading this post, quit reading now––and pay no attention to that book cover over there!) The New York Times Complete World War II: All the Coverage From the Battlefields to the Home Front (Black Dog & Leventhal, 2013). The coverage starts from before the war, and you can read articles in which pundits confidently assert that Hitler won't become a dictator. Because these are reproductions of newspaper articles, there aren't as many photographs as you see in a lot of these popular history books, but it's hard to beat that time-traveling "you are there" feeling of contemporary newspaper articles.

The book's articles (in 612 pages) were selected by the respected historian Richard Overy. But if you don't want to be selective, never fear. It also comes with a DVD of almost 100,000 WW2-related articles from The New York Times.

My veteran's science book present this year is Randall Munroe's What If?: Serious Scientific Answers to Absurd Hypothetical Questions (Houghton Mifflin Harcourt, 2014). Here's one question: "What if the earth and all terrestrial objects suddenly stopped spinning, but the atmosphere retained its velocity?" Munroe spends several pages explaining the horrific results in a scientifically rigorous, but blithely humorous tone. To give you an idea, he begins: "Nearly everyone would die. Then things would get interesting." The more I look at this book, the more I think I might need extra copies.

This vet has been married for 70 years to a woman who, sadly, has dementia. The effect for her is a loss of the ability to make new memories. She was an avid reader, and I bought her books for most of the 40-plus Christmases I've known her. Now, she can't remember what she reads, so I've had to find other presents over the last few years. But she still has a wonderful memory for the old days and enjoys reminiscing, so this year I'm going to see if she likes revisiting landmark moments through this book: Life: The Classic Collection (Life, 2008).

There is relatively little text in this volume; it's mostly just large-format reproductions of the iconic photographs that appeared in the 20th century in Life magazine; photos like President-elect Truman holding up the newspaper with the famous "Dewey defeats Truman" headline, the D-Day landing on Omaha Beach, that sailor kissing that nurse in Times Square at the end of WW2, athletes giving the heads-bowed black power salute at the 1968 Olympics, celebrities like Louis Armstrong, Rita Hayworth, Marilyn Monroe. One of the bonus features is that some of the photographs are reproduced a second time, so that the buyer can remove the second photo and frame it.

I was hanging out with a longtime friend last weekend, and her daughter and son-in-law were visiting from the UK. He has a fellowship at Cambridge University. He's an Oxford University graduate and was enjoying telling stories about Cambridge. One was about the arcane rules for visiting Trinity College, and how condescending its staff were when they explained that of course there could be no visitors to the college when the chapel was closed.

Since we had also been talking about books to read over the holiday break, that gave me the perfect opportunity to recommend my absolute favorite read of 2014, Ben Macintyre's A Spy Among Friends: Kim Philby and the Great Betrayal (Crown, 2014). Not only is this a fantastic read, I told him, it has an added particular benefit for you. Next time some Trinity College staffer gets uppity, you might remind him that Trinity College was the breeding ground for the members of the Cambridge Spy Ring, the greatest traitors in English history!

We also had a good long chat about the English, which was great fun for me, since I'm an anglophile. They both recommended a book they'd been reading, Kate Fox's Watching the English: The Hidden Rules of English Behavior (2nd Edition, Nicholas Brealey America, 2014). The fine gradations of social class and the dizzying array of behaviors that identify whether someone is working class, lower middle, middle middle, upper middle, upper class, and when/where/why it matters is mind-boggling to an American. But I figure if this couple, one American and one English, both enthusiastically recommend this book, I had to pass it on to my personal Santa, to put on my "nice" list. 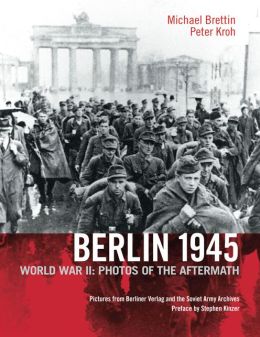 Speaking of my personal Santa (not to mention photography books and World War II), he's also been informed that my list includes Berlin 1945: World War II: Photos of the Aftermath, by Michael Brettin, Peter Kroh and Eva C. Schweitzer (Berlinica Publishing LLC, 2014). I remember, many years ago, seeing the movie The Big Lift, with Montgomery Clift, filmed in the ruins of Berlin, and being completely distracted from the story because it was stunning to see the utter devastation and how the lives of Berliners had become primitive struggles just to get water and food enough to survive.

According to the publisher, most of these photographs, taken by Red Army personnel in the immediate aftermath of their overrunning the city, have never before been published in the US. Der Spiegel says: "These photos depict a grotesque normalcy, beyond the well-known iconography of heroic liberations and optimistic rebuilding." I'm sure it will be fascinating.

Remember my longtime friend I mentioned earlier? Her mother turned 100 years old this year. Her greatest pleasure is reading, and her favorite genre is romance––traditional, not the new stuff with all that graphic sex. For her, I'm suggesting some D. E. Stevenson books published back when she was about half her current age. My favorite Stevenson novel is Miss Buncle's Book, about a young woman in a village who is in dire financial straits. She thinks writing a book might be a way to make money, but all she knows about is her village and the people in it. So, using a pseudonym and changing the name of the village and the people, that's what she writes about. When the book is published and becomes a runaway success, though, people in the village soon figure out it's about them, warts and all, and they want to know just who wrote it. This is a delightful comedy, and a sweet romance with Miss Buncle and her publisher. 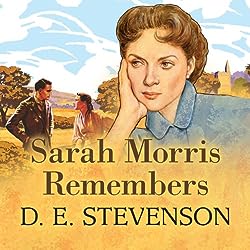 For a traditional romance reader, I think other good D. E. Stevenson choices would be the paired books Sarah Morris Remembers and Sarah's Cottage. These are stories about a young woman who, in the first book, grows up in an English village with her mother, vicar father, two brothers and one sister, enjoys visiting her grandparents in Scotland, and falls in love with a visiting scholar from Germany with whom she loses contact during World War II. In the sequel, Sarah is working during the war at a large London department store as a top customer service assistant, dealing with customers who speak only French or German. There are many amusing moments with a wide variety of these customers. Sarah is also challenged by her younger sister, Lottie, a beautiful, but spoiled young woman who has married extremely well and thinks of nothing but her social life, not her young daughter. So why is it called Sarah's Cottage? Well, because Sarah's life changes radically and she moves to Scotland, to a cottage on her grandparents' land. The rest of the book describes her life there. Both books transport you to a simpler time, but one with just as many trials and joys as we have today. Oh, and these books are available in audiobook form, which may be convenient if your recipient has vision problems.

Yes, I noticed that there are no mysteries in this post. You can't have everything!

And not everybody wants books in their stockings, hard to accept as that may be. Get them the usual sweaters, scarves, video games, toys, electronics and what have you. If you're looking for good stocking-stuffers, what would be better to put in a stocking than socks? And if you ask me, the best ones come from Darn Tough Vermont.