At the Eleventh Hour

In the 11th hour of the 11th day of the 11th month in 1918, a temporary cessation of hostilities was declared between the Allied nations and Germany in the First World War. After years of war and the loss of an entire generation of young men in what was then known as "the Great War," armistice was declared. It was commemorated as Armistice Day beginning the following year, 1919.

It was two decades later that November 11th became a legal federal holiday in the United States in 1938. In a grassroots effort that began in Kansas, America’s heartland, during the years after WWII and the Korean War, a drive to expand the Armistice Day celebrations to include veterans of all wars was successful. Dwight D. Eisenhower signed a bill into law that transformed November 11 to “Veterans Day” in 1954. These days, only 21 percent of employers observe this federal holiday, but still it is a day on which most people think about the veterans of all wars and of those not-yet-veterans who are risking their lives in battle.

This is a snapshot of an era and a place that evokes a feeling of déjà vu because it is so well done that, as you read, you feel like you were alive in 1942 and living in Elderberry, Georgia. At least that is how I felt and I wasn't born yet.

The story begins at this time of year, during the second week of November, when people's thoughts are turning toward Thanksgiving. It will be a different holiday from those of the past, for so many reasons it is hard to list them. This is the first major family holiday since America entered the war. Most of the young men, sons and husbands will be away from home. They are in training or even in peril and they are all missing home as much as their folks. The windows of many homes have a blue star flashing out the message that an inhabitant is off in the fray. Some homes have the golden star in their windows, memorializing those who have already lost their lives. 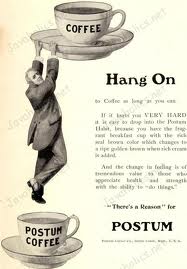 Because the nation is geared up for war efforts, there have been many changes on the home front. People are learning to do without sugar, butter, coffee, gasoline, nylon stockings and things made with rubber, such as the prosaic women's foundation garments and decent automobile tires. The citizenry have given up their metal hangers, draping items atop others on one hanger. They have been trying to ease their children into the idea that Santa won't be bringing bicycles this year, because of the lack of metal and rubber and trying to maintain an appearance of normalcy. Elderberrians do a good job of this, but having their family members in danger as well as lonely makes for a melancholy holiday time. This town reaches out to the servicemen who are in their town for leave or passing through. 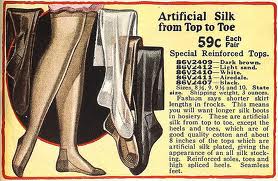 In a pull-together effort, the people of the town try not to complain about the substitutions, like Postum for the coffee, honey or saccharine for sugar and an unappealing margarine with a blob of food coloring. The ladies wear rayons instead of nylons and such innocent items as balloons are a thing of the past. For Thanksgiving dinner, desserts may be sparse and hens are substituted for turkey. But it is the company that counts.

Miss Dimple Kilpatrick, a first-grade teacher, disappears one morning while on her usual walk and this mystery just simmers a bit because the mysterious death of the school custodian is also the talk of the town. In a community effort, different individuals try to find clues and even though Miss Dimple has left several, the people of Elderberry are so accustomed to safety that they are blind to the possibility of danger. This is the only part of the book that is a little hard to believe, but even as it is today the people are tired, discouraged and busied by their daily lives and have little ability to investigate mysteries.

Initially, it seems that there are too many characters to keep straight, but eventually the reader gets to know the personalities behind the names and begins to feel at home in Elderberry. I have known people like this. I only wonder if we have changed as a society to such an extent that we would not be willing to give up such personal items as hangers and our pots and pans. Are there enough of us who know how to cook using substitutions to make meals enjoyable or even palatable, since we have grown up with ready-made food? 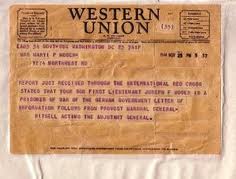 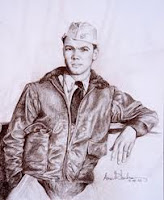 This is a good read for the early days of November, and it made me grateful for what I take for granted. It also helps us all to remember that today we also have service personnel away for the Thanksgiving holiday who are not any different from the soldiers of 1942, and they are also homesick and experiencing a very different type of turkey dinner. 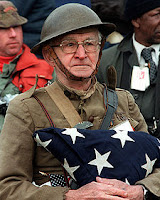 There is no mention of Veterans or Armistice Day in this novel, perhaps because when you are caught up in a war without an end in sight it may seem odd to celebrate the end of the war that was supposed to end all wars.

It is poignant to see pictures of a WWI vet attending the dedication day parade for the Vietnam Veterans Memorial in 1982 and holding to his chest the flag he and his son both fought under. On November 11th we salute the living and the dead.

Sometimes it is the survivors who have difficult challenges, and the Veterans Administration helps in some ways, but sometimes the community steps in. An example of veterans helping veterans is a shelter called Home of the Brave which was founded by four Vietnam combat vets in Milford, Delaware. Its purpose is to house and feed homeless vets and help them get back on their feet in hard times.