Wake Up and Smell the Coffee

"Tousled and sleepy, each facing in a slightly different direction, they sat on the sleeping shelves like great black lumps. Their huge, heavy heads drooped, their bodies slumped, their mysterious coffee bean eyes stared at nothing. Lost in gorilla reflections, they scratched themselves occasionally, or emitted a digestive rumble, or poked a listless finger in nostril or ear while they waited for their breakfast.

"Pretty much like people first thing in the morning, if you ask me." ("Nice Gorilla," by Charlotte and Aaron Elkins, Malice Domestic I, edited by Elizabeth Peters)

If you ask me, too. Makes me feel like reaching into the story with some cups of strong coffee. Do you often feel like that while reading? I do. I'm not talking right now about books in which someone is acting as if his or, more often, her forehead has been stamped "too stupid to live." I'm talking about books in which a character is wearing a sign on his back that says, "Kick me." Or when someone's suspicions ripen as slowly as that avocado sitting on your kitchen counter when you're anxious to make guacamole.

Mrs. White is one of those avocados. She is a quiet housewife and mother who gradually comes to realize that her beloved husband is the guy who has been brutally murdering women in the New England town of Putnam Wells. The reader knows this from the very beginning, when Louise Porter gets home with ingredients for chicken cacciatore dinner, and Paul White walks slowly out of the kitchen corner to join her. 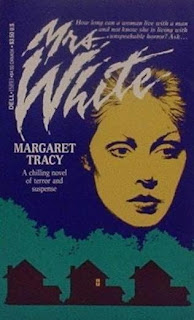 This is a fascinating story that shows a woman picking up the first little clue and drawing a false conclusion. Soon there are more clues to puzzle Mrs. White about her carpenter husband, and she begins to probe her memory for almost forgotten, but now tantalizingly suggestive hints that might help her decipher the present. At the same time, her husband Paul increasingly recognizes that his wife isn't the soft and placid woman he thought he married. The tension builds until plot developments and changing characters' viewpoints shift anxiety into overdrive.

Margaret Tracy's Mrs. White is not a gore fest. In addition to gripping psychological suspense, this book offers some interesting character portraits. It's too bad that, after winning the 1983 Edgar for Best Paperback Original, it's largely forgotten today.

Today, yesterday, a century ago. Avocados are not a recent development as we see when we get to know Mrs. Bunting in Marie Belloc Lowndes's 1913 classic, The Lodger. The Buntings are good people who have retired from careers as house servants. Unfortunately, they are now teetering on the brink of financial disaster. They finally put a small card in the window, offering rooms to let. When a stranger reads the card and knocks on their door, Mrs. Bunting casts an experienced servant's eye on him and assesses him as obviously a gentleman, even if his clothes are very shabby and his manner very odd. After all, he's a potential lodger, the only thing that stands between the Buntings and starvation on the street. London is in a state of uproar due to a series of murders committed by a man called "the Avenger" because he leaves notes on the bodies. From these notes, it is obvious that the murderer doesn't approve of women who drink. The Buntings follow the Avenger murders in the newspapers that are hawked in the neighborhood and are kept abreast of the clues by a young cop working on the investigation. He drops by occasionally to see Mr. Bunting's beautiful teenage daughter, who has come to stay with them, but he never sees the lodger.

After reading newspaper accounts and listening to their policeman friend, is it any wonder that Mrs. Bunting becomes suspicious when she overhears the reclusive lodger, holed up in his room, reading aloud passages from the Bible that are uncomplimentary to women? He has already forbidden her to enter his room under any circumstances. And then there is his appearance and manner, which are so bizarre. Soon, Mrs. Bunting is lying in bed listening for him to tiptoe out of the house in the middle of the night.

This book is a wonderful psychological and moral study of the respectable, working-class Londoner at the turn of the century. This Londoner is very suspicious of the police, loyal to associates, concerned about public opinion, conscious of class differences, and aware of the precarious nature of financial security. Moral questions about the nature of sanctuary and the plight of the criminally insane come into play. Mrs. Bunting finds herself in a real predicament: she needs the money the lodger provides, isn't sure if he is guilty, feels sorry for him, and actually rather likes him. She worries about the safety of the beautiful young woman staying in the house, yet worries that the policeman will arrest the lodger and cast the Buntings into financial ruin and life on the street.... Her suspicions slowly ripen. It's enough to make her head, and a reader's head, spin.

The Lodger isn't a horror story, but rather, excellent classic psychological suspense. I enjoyed this book and the 1926 Hitchcock movie made from it. (There's a glass floor in the movie, a fabulous idea given the mysterious lodger pacing upstairs and poor Mrs. Bunting, worrying below him.) This is a particularly great book to read and movie to watch as the days slink away to leave us nights of wind, rain, and cold. Along with The Lodger, how about something hot to drink, some chips, and guacamole made from ripe avocados?
Posted by Georgette Spelvin at 12:23 PM