Leon Bauer is, or appears to be, just an agent for American tobacco interests in Turkey. Rejected for military service, he's spent several years in Istanbul, learning the language and customs and steeping himself in the beautiful city that sits between East and West. With his German refugee wife, Anna, he has made Istanbul his home. Even after World War II ends, he has no desire to return to the United States.

Leon's other life is on the fringes of the intelligence community. He does occasional side jobs, mostly package deliveries, for a friend at the U.S. consulate. But when he gets an assignment to pick up a human package from a fishing boat one night, the job goes very wrong. Now, Leon has left the fringes of the murky world of espionage and is left stranded in its dangerous center, not knowing whom he can trust, and improvising to complete his task on his own.

It turns out that Leon has a talent for acting as a lone agent, keeping his own counsel and observing everyone in his life to try to figure out what went wrong at the pickup, who might have been involved, and whom they might represent; all while he's working hard to try to figure out how to get Alexei, his human package, out of Turkey. Now, he looks at everyone differently. Might there be a traitor at the consulate? Is an old friend a Russian agent? What about the hostess whose parties bring together people from all countries and interests; the guy who forges documents; the police investigator; Altan, the scrupulously-polite-but-threatening commander from Turkey's secret police; and even those closest to Leon?

Leon may be new to the ruthless world of the secret agent, but he is soon drawn into its moral ambiguities and compromises; using friends, even when it places them in danger and even as he learns how unworthy Alexei is of his help. 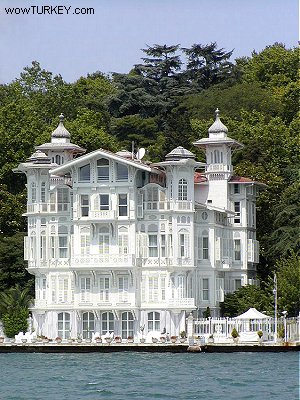 Joseph Kanon excels at drawing a picture of the immediate postwar period. Europe's cities are in ruins, loyalties are in flux, power is shifting and nobody knows what the new world will look like. He's done it before in his novels, especially in The Alibi and The Good German, probably the novels most similar to Istanbul Passage. Though the mood may be the same, this is a different location, and one that adds a lot to the story. Istanbul has always been a divided city; East and West, Muslim, Christian, Jewish. In the 20th century no longer a world power, it sat uneasily between Germany and Russia during the war, and now it must walk a tightrope between the new powers, Russia and the United States. Istanbul is the perfect setting for this story, and Kanon brings it alive, from the street bazaars to the bathhouses, the mosques, the back streets, the cafés where people sip tea from tulip glasses, the yalis (villas) on the waterfront, and the mysteriously beautiful and dangerous Bosphorus River.

The title, Istanbul Passage, is well chosen. It can refer to Leon's passage from almost an errand boy to a rogue agent, from a black-and-white moralist to somebody who reluctantly, and to his chagrin, learns from Alexei and Altan what it takes to survive when you're on your own. Or the title may refer to Istanbul's history as a place where people are bought, sold and smuggled. Throughout the war and afterward, the city served as a passage for refugees, especially Jewish refugees, to escape to a new life. And that Jewish-refugee theme forms a part of this story as well.

This is not a shoot-'em-up, action-packed thriller, but one that puts you into its time and place, and in the mind of a man trying to figure out where his loyalties lie within it, and what choice to make when all the alternatives are bad.

Note: Istanbul Passage was published by Atria Books in May 2012. A version of this review appears on the Amazon product page, under my Amazon user name.
Posted by Sister Mary Murderous at 4:00 AM