It's the fall of 1964 in East Texas. Barry Goldwater vs. President Lyndon B. Johnson. Bewitched on TV. The Beatles and the Stones on the radio, but if you're 11-year-old cousins Top and Pepper, you don't get to listen to them long-hairs. You listen to bluegrass by Bill Monroe. That's music, according to Grandpa, Ned Parker. 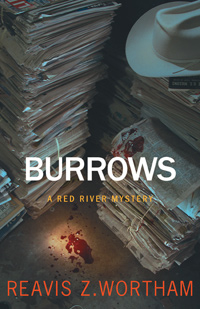 In Reavis Z. Wortham's Burrows, Ned is now retired from his job as Lamar County constable and is working on his farm. His nephew Cody, home from Vietnam, has been elected constable to replace him. Horrific events by a killer in the spring (detailed in the first Red River Mystery series book, The Rock Hole, named one of 2011's best books by Kirkus Reviews) have left people on edge. Some folks still interrupt Ned's mealtimes with calls reporting trouble. One such call sends Ned to the river, where a body has been found by a fisherman. The corpse is proof that three fugitives have brought a killing spree through three states to Lamar County. The reader has already met two of them, former area residents Kendal Bowden and Kevin Jennings, in the first few pages.

As if the lawmen need more proof, one of Kendal's childhood friends and his family are found slaughtered. The question is whether Kendal is still around. While Cody tries to track him down, Ned rides herd on his grandkids. Top's parents died in a car accident, and he lives with his grandma, Miss Becky, and Ned. His cousin Pepper is a good companion come fishing or crawdading time, but she isn't always a good influence on Top. Top and Pepper live with loving people and in a county where neighbors rely on each other. The lives of these kids are straight out of To Kill a Mockingbird or the TV show Lassie, except for moments when they remember what happened in the spring. They have their real-life heroes, including their Uncle Cody.

Cody's search for Kendal leads him to the Cotton Exchange in Chisum. The huge, dilapidated building hasn't been used for decades, and it is packed full of trash and junk. Through all this is a web of booby-trapped tunnels, where Cody and Deputy "Big John" Washington become trapped.

Whoa. Let's leave the scene at the Exchange. Read the book, and experience your heart jack-hammering like it hasn't since The Silence of the Lambs. It's a statement about Wortham's writing skills that his harrowing chapters about these tunnels through hell are as well-crafted as chapters narrated by Top about his escapades with Pepper.

Wortham, a former teacher and humor writer for outdoor-life magazines, has hunted and fished the bottoms in East Texas. He spent weekends of his childhood with grandparents in Paris, Texas, the Lamar County seat at the edge of the Piney Woods and the model for the book's Chisum. Wortham's familiarity with the area shows. Was Wortham a Top? His grandparents a Ned and Miss Becky? Their thoughts and actions are realistic for the time and place. The relationships between family members and between old friends are extremely well done. All of Wortham's characters breathe on the page, and their conversations twang with a Texas accent. They learn––or don't learn––from experience. Whites are––or aren't––decent to blacks. These are real folks living in 1964 Lamar County, Texas.


Burrows' plot arises naturally from these characters. Kendal Bowden has become much more complex than a disturbed badass by the story's end. Interesting information about mental disorders gives better understanding of some of the other characters. The importance of ties––between people and with one's self, animals, and the land––is stressed. Ned takes responsibilities seriously and ponders his retirement. John Washington, legendary black deputy, and Cody, new white constable still dreaming about Vietnam, have a particularly interesting relationship in the light of racial history in Texas and Johnson's 1964 Civil Rights Act. Top and Pepper, innocent children exposed to the world of adult violence through Ned's job and the criminal acts of others, grow up. On the one hand, Burrows is a coming-of-age story for Top and Pepper, and one of tremendous personal and professional growth for Cody. On the other hand, it's an explanation for Kendal's life of downward spiral, about the long roots of violence, and the sins that beget sins.

The pacing is like riding a wily bronco. It begins with a jolt before deceptively settling down to follow the kids and life in Center Springs and Chisum. It then gallops and bucks to a crescendo, calms, and then rears again as the book reaches its end. Events are foreshadowed by half-caught movements, nightmares, and statements that are meaningful in retrospect. Nature, in the form of fauna, flora, the Red River, and the weather, plays an important role in both the plot and the story's symbolism. There is some bird hunting, and another event that an animal lover will find painful. Scenes are accompanied by suitable changes in the unpredictable fall weather of East Texas. A beautiful day of shirtsleeves weather is followed by a howling blue norther at the Exchange, bringing a fast 50-degree drop in temperature and sleet. The whole shebang––alternating bucolic and incredibly suspenseful plot––is all reeled in nice 'n' tidy and told in a warm Texan drawl by Wortham, a gifted storyteller.

Burrows, the second book in Wortham's terrific Red River Mystery series, will be published by Poisoned Pen Press on July 3, 2012. It is The Real Texas Deal. Hard-boiled fans, read it after The Rock Hole. Read it for unremittingly good writing, memorable characters, and a kick-ass plot. But whatever you do, Don't Miss It.

Note: I received Burrows as a free digital galley from the publisher.