A few weeks ago, I was tempted to try a mystery that was billed as humorous and took place in Holland. The title beckoned also. It was Dutch Me Deadly, by Maddy Hunter, part of the Passport to Peril series. I wouldn’t put it in into the category of geezer lit, because the seniors were all curmudgeons or ditzes and dimwits. The humor went under my head as if I were looking for Edam, and what I got was American cheese. Now, I know people who won’t eat anything else––members of my extended family no less––but if you are looking for some Gouda reading I do have a few favorite Dutch authors who have brought me hours of pleasure. The ones that get translated are certainly prolific and they are well worth your time.

A. C. Baantjer has written about 70 books, with only about two-thirds having been translated. DeKok and the Disillusioned Corpse is a good example of his work. On a windy, damp March day in Amsterdam, a body is fished out of a canal. There is no identification on the person and the only clue to his identity is the way he is dressed, in black turtleneck, black jeans and new Keds. Detective Inspector DeKok (Baantjer's de Cock is DeKok in U.S. publications) and his partner, Vledder, are quite surprised when, the next day, a beautiful young woman comes into the police station, claiming she knows the victim and they were, in fact, lovers. Unfortunately, the little she knows about him doesn't include his real name. Amsterdam is a city of canals, in a system that is even more extensive than that of Venice, a little-known fact that the citizens of the city are proud of. They are also proud of the fact that murder is somewhat of a rare happening in this beautiful city. Death, on the other hand, is common because of widespread drug addiction and alcoholism. In fact, DeKok wants to consider an accidental death in the current matter at hand but the postmortem reveals the fatal wound on the young man's face. These two detectives have only one cryptic clue to start them on their search. The dead man was heard to ask "Can a dead person commit murder?" a day or so before his death.

The story is gripping and beautifully complex, with DeKok's character a subtle mix of psychology, history and intuition that make him a sleuth many compare to Maigret. I like him a bit more than Maigret, though. He is a maverick, a Luddite and, most of all, a compassionate man. 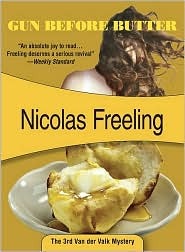 Nicolas Freeling has some 37 books to his credit, and my favorite is Gun Before Butter. This book won the Grand Prix du roman de l'Académie française and was shortlisted for the Gold Dagger from the British Crime Writers' Association. It is perhaps one of Freeling’s best known. The title paraphrases an old 1960s slogan "guns and butter" that echoes back to WWII and refers to the economy and governmental choices about which product to produce more of, especially during a time of war. Hermann Goering said that guns would make the Germans powerful, while butter would make them fat. (And who would know that better than the man often called Fat Hermann?) 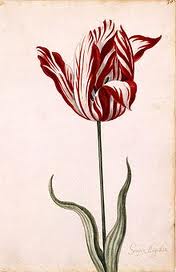 Inspector Piet Van der Valk of the Amsterdam police would rather be in Amsterdam than anywhere else. He had just come back from the country and had his fill of fresh air. The first case he is told about is that of a young girl involved in a public fracas. Her name was Lucienne Englebert. It came to his attention because Van der Valk was known to be a character who was sometimes quite rude about Dutch provincialism and isolationism. He was a nonconformist, but because he was good at his job, he had license to be a maverick at times. In revenge, his co-workers treated him like a buffoon. He was given the odd jobs; anybody with a funny name or a funny business came to him to be straightened out.

The affair of “The Diamond Cutters," which was his private name for the case, was at its base a romance, because he fell for the beautiful Lucienne. Years later, as he pondered the mystery while he relaxed with a good meal, he remembered every time he saw Lucienne. He said the case was like a diamond, which while able to cut others into facets, could throw out light and sparks and strange fire.

Critics have also compared Van der Valk to Maigret, partially based on the fact that he liked to think and eat. Well, so do I.

One series that I have read in totality is Janwillem van de Wetering's. Outsider in Amsterdam, the first, is based on the characters of Adjutant-Detective Henk Grijpstra, and Detective-Sergeant Rinus de Gier. Grijpstra is heavy, middle-aged, and not happily married. He is the senior partner of the team. He is a Frisian who, in his youth, dreamed of being a jazz musician or a painter, and when a set of drums mysteriously appeared in police headquarters, he appropriated them.

De Gier is younger and attractive, with brown eyes and curly hair, mustache and always wearing his denim suit, which appears to be the height of fashion. He is single, handsome, and very successful with women. He is a deep thinker, frequently pondering the meaning of life. He is, like Grijpstra, an amateur musician. He often carries a small flute, and in odd moments he and Grijpstra improvise together in their office. Pictures of van de Wetering make me think he modeled de Gier after himself.

The third character present in all the books is the elderly Commissaris, almost incapacitated by arthritis. He supervises the investigations, providing key insights into the cases. He is never named, except by his wife, who calls him Jan. He is fond of jenever (gin) and small cigars. 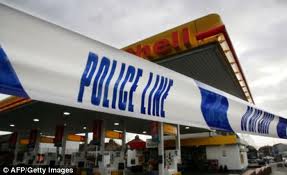 The cases are all very intriguing and unusual, but they play second fiddle to the relationships that develop and the interaction of people. Often, an interrogation between the detectives and their suspects wanders into philosophical or ethical ruminations. Van de Wetering himself studied Zen. At one point in his life, his alcoholism interfered with his work and he stopped writing until he sobered up. After that, in the books de Gier also gave up alcohol.

Most of these books by Freeling, van de Wetering and Baantjer were written in the '60s and '70s and they may appear dated to the modern reader, but I never found them so. Another excellent writer from the Netherlands is Robert van Gulik, who writes about Judge Dee, who lived during the Tang Dynasty in China in the 600s. If these writers are an example of what comes out of the area, I hope some readers can suggest more for me to look into. Perhaps something written in the recent decades.