At first it was just the snowdrops that were no-shows. Then the crocuses were missing in action. I became concerned when the King Alfreds came down with the yellow flu and only a few raised their heads to do the job of heralding spring. In turn, the Ice Follies were AWOL, although my neighbor had plenty, but the whole thing became more official when I read that the DC Cherry Blossoms were going to be clocking in late as well. This problem seems to be a cause for concern in other areas, too. What has happened to spring? Is something holding Persephone back in the underworld? Or is it something else?

The experts have answers for everything but I ask you––is it really fair to blame our troubles on a little groundhog or even a little boy, "El Nino"? 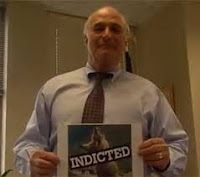 Almost everyone is after Punxsutawney Phil's head after his abysmal flawed prediction of an early spring, and an Ohio prosecutor has taken action says the Washington Post. Others are also suggesting that Phil look for another job. But where could he find a similar occupation that would keep him burrowing underground? 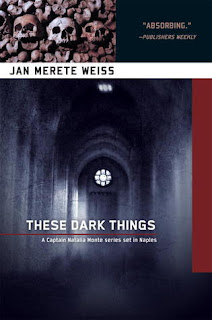 Gina Falcone also has an occupation that keeps her amidst dirt, darkness and death. Much of what she does is under ground. In These Dark Things, by Jan Merete Weiss, Gina opens the story as she goes about her business as a bone cleaner.

There is the custom in Naples, Italy of the second burial. Officially, this practice has ceased decades ago, but it is an ancient ritual going back to the Egyptians. Mourners wait for a year for the body of a loved one to decompose, and then dig up the bones and place them in a bone box for the second burial. Neapolitans still have deep-seated superstitions about the dead. Perhaps it was not surprising that people here actually dressed in black so as not to be mistaken by the dead as living souls ripe for haunting.

These days, the few remaining bone cleaners, like Gina, collect the bones from the grave keepers and put them to rest in certain Neapolitan churches where the rite is quietly tolerated. One of these was the Church of Santa Maria delle Anime del Purgatorio. This centuries-old building has a deep crypt, down into which the faithful still climb to pray over bones and help their owners on their way out of purgatory and into heaven. One day, Gina encounters the relatively fresh body of young and beautiful Teresa Steiner, murdered and displayed.

Since the victim is found in a cultural shrine, the case falls to Captain Natalia Monte of the Carabinieri. She is a member of an elite group within the national police. This is a position she has worked long and hard for, becoming one of the rare women to reach this rank and stature. As Natalia begins to investigate with her partner, Sgt. Pino, several lines of investigation open up. Teresa was a student at the local university and also worked for a local crime organization that had the concession for collecting donations from the hundreds of local shrines.

At this time, Naples is a city in turmoil for many reasons. The main one is that the streets are lined with piles of rotting garbage that hinder the passage of pedestrians as well as road traffic, and that are emitting a stomach-turning stench that affects everyone's daily life. To make matters worse, the public health department is reporting an increasing number of cholera cases.

The Camorra, the Naples local criminal organization that runs the garbage service, refuses to collect it or allow anyone else to collect it, because they are at odds with the Mayor, who is pushing a new state-of-the-art incinerator. Those few brave citizens who had the gumption to move the garbage from in front their place of business were soon experiencing their first burial.

Older than the Mafia, the Camorra origins go back to Spain's brutal rule of Naples. It is a much more vicious and ruthless organization than the newer crime syndicates. It has no rules and it penetrates every aspect of life in Napoli. The Sicilian Mafia had once granted family members and innocent civilians immunity. In the case of the Camorra, if an offender were "in the wind," relatives, wives, and even children are not exempt from wrath and vengeance. 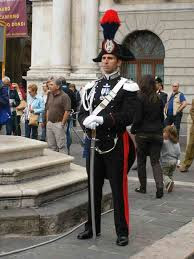 I find the policing system in Italy complex. I get one impression of how things are from Salvo Montalbano in Sicily, and quite another from Donna Leon's Guido Brunetti. Both of these cops are in branches of the service other than the Carabinieri  The Carabinieri are a national force that came into being out of distrust, to make certain that no ministry would have all the military and police power.

To keep the police above the fray, members of the Carabineiri even have to get their spouses approved by their superiors after exhaustive background checks. Being friendly with anyone in the Camorra is grounds for dismissal. This was aside from the very real possibility that if there was a serious investigation into any criminal activities, the police and Carabinieri themselves were at risk, as were their families. The Camorra is actually like a second government, with its own internal rivalries, and it is here that the internal troubles spill out into the street. What a way to live!

Captain Natalia Monte walks a razor's edge in her job and in her life. Natalia, naturally, has had friends throughout her childhood who may now be associated in one way or another with the Camorra. Weiss really brings both Natalia and Pino to life. Pino's character is fleshed out well and is quite interesting. A Buddhist who rides a bicycle to work, Pino is a good balance to Natalia, who is a freer spirit, but who nonetheless is dogged and incorruptible. The next step either of them takes in this, or any other investigation, could be fatal. Weiss portrays a Naples that should by all accounts be a beautiful place to live, if one is considering the weather, the architecture, the flowers and the food. But in La Bella Napoli, survival depends on walking a tightwire. I enjoyed the book tremendously, and hope to meet up with this intrepid duo again.

Meanwhile, even in Naples, nature survives without worrying about retribution. Here on the East Coast, I will look forward to the time when lilacs bloom in the dooryard.

Note: A version of this review may appear on Amazon, Goodreads and other reviewing sites under my user names there.