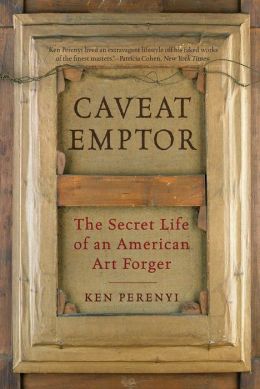 Caveat Emptor: The Secret Life of an American Art Forger
by Ken Perenyi

For over 30 years, Ken Perenyi, beatnik, thief, and master forger, has been producing copies of paintings by American and British artists so accurate in every detail that they have been accepted as authentic and sold by major galleries and auction houses in both countries. The statute of limitations now having expired on any presumptive illegalities by Mr. Perenyi, he has decided to share his remarkable story with the world. The result is a breezy and unapologetic tour through the New York art scene of the late 1960s and 1970s, along with enough hair-raising tales to give any buyer of fine art pause before shelling out serious money for a painting.

As a teenager in Palisades Park, New Jersey, in the late 1960s, Ken was a slacker, an indifferent student whose only interest in painting was decorating the cars he painstakingly rebuilt to cruise the streets with his friends. A chance meeting with a group of hippie artists and low-level mobsters who lived in an old building nicknamed "The Castle" introduced him to an entirely different lifestyle. Along with thousands of his generation, he "tuned in, turned on, and dropped out."

Tom Daly, the originator of psychedelic body painting, introduced him to Max's Kansas City, the nightclub in 1970s New York for the arty set, where Perenyi rubbed shoulders with artists like Peter Max and Andy Warhol and performers like David Bowie and Alice Cooper. Sex, drugs and intense conversation were very much on the menu, and the star-struck boy from Jersey, who wasn't even old enough to order a drink, drank it all in.

His artist friends, horrified at his ignorance, began dragging him to museums and galleries, where he first became fascinated with the work of the artists he would later copy so successfully. From watching Daly paint, he learned that the creation of a work of art is a painstaking process, not some undefinable inspirational bolt from the blue. He was fascinated by the process, and for the first time in his life began to study seriously, although he never took a formal painting or design course. His indifferent degree from a third-rate trade school and the draft classification he managed to obtain––1Y (physically or psychologically unfit)––ensured that he was virtually unemployable for any meaningful work, so he more or less drifted into becoming a painter.

His early years in New York read like the often amusing story of any struggling unsuccessful artist, except that the connections Perenyi had forged provided entrée into the circles of the rich and scandalous of the era. In addition to producing his own abstract paintings, he continued to study by painstakingly copying the works of past masters. His own original work was not selling well, and he was financially desperate. When his roommate shoved a biography of Han van Meegeren, the infamous World War II art forger, into his hands and said "Read this," a new career was born.

Artists reuse techniques and images that have worked for them again and again, and Perenyi has an uncanny ability to analyze and imitate these techniques. In his heyday, he could paint several pictures in the style of different artists in the same week. He obligingly shares with the reader how he ages his paintings, often starting with drawer bottoms and panels from 18th or 19th century junk furniture. A restorer for whom he worked for a few years taught him techniques for aging a painting, and a framer whose hand-carved frames were indistinguishable from antiques gave him the secret of an old gesso underpainting solution that simulated the aged cracks that often appear in old paintings. Unlike John Drew and painter John Myatt in Salisbury and Sujo's exposé Provenance, Perenyi never attempted to provide a history for his paintings; he let his work speak for itself. It is apparently that good, and that lack of a false provenance for his work may be what ultimately saved him from criminal prosecution.

The FBI gathered evidence against him for years but could never build a sufficient case, and has finally sealed his file. Imagine the furor in the art world if literally thousands of paintings, many sold by reputable galleries and auction houses and authenticated by experts, were proved to be Perenyi forgeries! Today, visitors to his art gallery in Madeira Beach can buy his exquisite copies, some for only a few thousand dollars. His prices may rise, though, after publication of this book, which the London Guardian reports has been optioned for film by Ron Howard. Perenyi's website even asks "Why spend millions at Christie's and Sotheby's?" and states unequivocally that all the paintings he offers for sale are his own work.

Caveat Emptor does not pretend to be great literature. It is written in an engaging conversational style that must make the author a very amusing dinner guest. Perenyi is in no way remorseful or apologetic toward those who may have paid hundreds of thousands of dollars for his forgeries. His sense of responsibility is entirely to the artists whose work he reproduced or modified. If he has captured their techniques and visions and even carried them forward as they would have, he is satisfied with what he has accomplished. His is a stringent, but very curious and limited, code of ethics, bearing little relation to ordinary morality or legality.

While Perenyi goes into great detail of how he worked and who he knew, we really learn very little of his personal life. Even his sexuality is ambiguous; while he mentions brief relations with many women, his long-term partners are always men. A story in The St. Petersburg Times says that he currently lives with a daughter, but she appears nowhere in the book. In the end, I was both fascinated and horrified by Caveat Emptor, and dissatisfied that it ended without resolution for the reader of this complicated character with his unquestionable genius and his almost nonexistent sense of ethics. And perhaps that is just what the author intended.