Now let's say the employer isn't the phone company, but Britain's MI5 intelligence service, the line worker is an entire small office building's worth of castoff agents gone rogue, and the damage ranges from severe embarrassment to kneecapping to gory death. In other words, not just a detour or even a frolic, but some whole new legal concept, like maybe ruckus, binge, spree, rampage, rumble or wingding. Though maybe being British, they'd go for understatement and call it something like a perturbation.

Whatever you call it, and whatever the legal consequences, what we have in Mick Herron's Dead Lions is decidedly not just another day on the job. At MI5, if you screw up in a big way––like become a blackout drunk or punch out another agent in the lunchroom or let highly confidential material fall into the hands of the press––then you end up being moved from Regent's Park to Slough House. At Slough House, the "Slow Horses" are given endless, dull paperwork, in hopes they'll give up and resign. 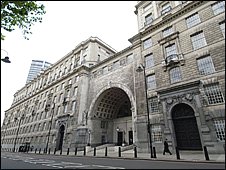 In case the humiliation of becoming a Slow Horse, and the tedium of the work aren't enough encouragement to quit, Slough House boss Jackson Lamb turns up the discomfort level with a constant stream of insults, demeaning assignments (like picking up his takeout orders) and crude gross-outs, like aiming his deadly flatulence directly at his charges.

The current denizens of Slough House are made of sterner stuff, though, and won't be pushed into resigning. Or maybe it's just that they're too stubborn or stupid to realize the movers will never be taking them back to Regent's Park.

As the story begins, an old street agent named Dickie Bow is found dead on a bus near Oxford. Lamb figures out that is murder and that it's connected with a Cold War Russian spy named Alexander Popov––who may be real or may be a fiction created by MI5 back in the day. Nobody at Regent's Park would want to be bothered with this, Lamb thinks. They're far too busy spying and conducting disinformation campaigns on each other; probably not all that interested in some washed-up low-level stringer agent from a war they've all but forgotten. Lamb harnesses all the Slow Horses to work on the case; all, that is, except for the two who get a call from the Park to provide protection to a visiting Russian oil baron, Arkady Pushkin, while he's in London for some high-profile meetings and possible recruitment by the Park. Did you notice that Alexander Popov and Arkady Pashkin have the same initials? One of the Slow Horses, Catherine Standish, does, and that worries her. At first, Lamb is dismissive: "Give me a break. I've got the same initials as . . . Jesus Lhrist, but I don't go on about it. This isn't an Agatha Christie." You'd better believe it isn't an Agatha Christie, and Lamb's crudity isn't the half of it. As Catherine's suspicions ferment, the plot bubbles with sleeper spies, Russian gangsters, riot in the streets, guns, explosions and mayhem in London's newest, loftiest skyscraper.

It can be a little difficult at times to keep all the Slow Horses straight, and the plot loses a bit of steam in the middle, but get past this and enjoy Herron's writing. It's full of style and cynical humor, and the last third has all the punch-your-lights-out action of a movie thriller––though the Slow Horses' nonexistent budget means that chases are on foot or bicycle, and the weaponry is in short supply. 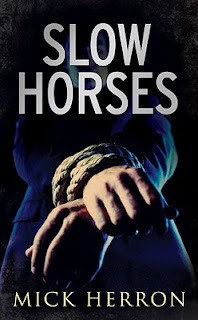 Dead Lions will be published on May 7, 2013 by Soho Crime. There is plenty of time before then to read Slow Horses, Herron's introduction to the Slough House crew, which was a finalist for the Crime Writers Association Steel Dagger Award in 2010. And maybe I'll also read his Zoë Boehm series: Down Cemetery Road, The Last Voice You Hear, Why We Die and Smoke & Whispers.

Dead Lions reminded me of just how effective and dangerous––not to mention entertaining––intelligence agency castoffs can be. If that piques your interest, you might try Bob Cook's Disorderly Elements, featuring the mole-hunting exploits of Michael Wyman, laid off from MI6 with no pension and a baby on the way; or Paper Chase, a wicked caper about four retired agents who decide to get back at the current crop of MI6 whippersnappers who have the bad manners to issue them written orders not to write any memoirs of their intelligence service.

Or how about Brian Garfield's Hopscotch, in which a 25-year CIA agent is booted out and, missing the thrills of the job, decides to threaten to expose all he knows about the Cold War powers' secrets, for the pure adrenaline-pumping pleasure of getting them all to chase after him? The film adaptation of the book is a hoot, too, and features the perversely charismatic pairing of Walter Matthau and Glenda Jackson. For sheer, giddy detour, frolic, hubbub and cartoonishly violent uproar involving former agents, it's hard to beat the movie RED, with Bruce Willis, Morgan Freeman, Helen Mirren, John Malkovich and Mary-Louise Parker.

Note: I received a publisher's review copy of Dead Lions. Versions of this review may appear on Amazon, Goodreads and other reviewing sites under my user names there.
Posted by Sister Mary Murderous at 4:00 AM