Review of Philip Kerr's A Man Without Breath 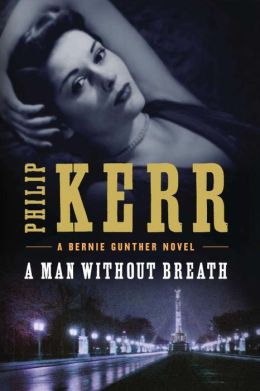 A Man Without Breath by Philip Kerr

It's 1943, and Bernie Gunther, former Berlin homicide cop, is now an investigator for the Wehrmacht War Crimes Bureau. Yep, you read those last four words right. During World War II, there actually was a German organization for investigating war crimes. Bernie, however, with all the cynicism and black humor of a Berliner, is keenly aware of the absurdity of the Bureau's practice of turning a blind eye to the systematic torture and murder of Jews, Gypsies, communists, Slavs, homosexuals and other designated enemies of the Reich. Instead, the Bureau focuses on investigating war crimes by the Allies and, occasionally, one-off criminal acts by German soldiers––like rape, murder and torture committed without benefit of an officer's order.

Bernie is sent to Smolensk, then precariously held by the Germans, when corpses are discovered buried in the nearby Katyń Forest. Those bodies turn out to be Polish army officers, executed by a shot to the back of the head, and the more the German troops dig in the forest, the more bodies they find.

Nazi Propaganda Minister Joseph Goebbels (whom Bernie likes to call "Mahatma Propagandhi") spots a potential publicity coup: show the world that this massacre was perpetrated by the Soviets and drive a wedge between the democratic Allies and the USSR. Goebbels orders Bernie to coordinate an international commission's visit to Smolensk to witness the digging and autopsies and, of course, to help the publicity along. Bernie's workload becomes heavier when two German soldiers are brutally murdered late one night after a visit to the local brothel in Smolensk, and other murders follow. Bernie's various investigations force him into contact with a number of Wehrmacht officers, nearly all of whom are aristocrats and seem to be related by blood, marriage or social connection. This is a double whammy for Bernie, who dislikes both military authority and class superiority. Naturally, he refuses to show any deference to the officers, even including those whom he figures out are part of the various plots to assassinate Hitler.

Bernie's insubordination and wisecracks have a tendency to make the local command less than cooperative with his investigations; not that this is a new phenomenon for Bernie. After knowing him only a couple of days, one member of the visiting committee says: "Trouble is what defines you, Gunther. Without trouble you have no meaning." True, but I like Gunther's own view of himself: "[F]or the last ten years[,] [t]here's hardly been a day when I haven't asked myself if I could live under a regime I neither understood nor desired. . . . For now, being a policeman seems like the only right thing I can do."

During this now nine-volume series, Kerr puts Bernie at ground zero at some of the notorious landmarks of the time. In this book, there are several, including the discovery of the Katyń Forest Massacre, a real event in which the Soviet NKVD killed over 14,000 Polish military officers as part of its "decapitation" policy, which systematically obliterated those who might lead resistance against them, including aristocrats, intellectuals and military elites. Kerr also includes references to the Gleiwitz Incident, the faked Polish attack on a German radio station, which the Nazis devised to justify their 1939 invasion of Poland; the Rosenstrasse protest, which I describe in a historical note below; some of the previously-mentioned officer class's attempts to assassinate Adolf Hitler; and the horrific medical experiments on communists carried out by fascist doctors in Civil War-era Spain.

I read a lot of World War II fiction, and a common mistake is for the author to put every bit of his or her
research on the page, which often kills the pace and flavor of the story. Having read all of the Bernie Gunther series, I can say that Philip Kerr never makes that mistake. His knowledge of World War II history is prodigious, and he works it seamlessly into his compelling fictional stories. Just read the Author's Note at the end of the book and marvel at all the real events and characters he's blended into this story without the least scent of a musty textbook creeping in.

I recommend A Man Without Breath to anyone who enjoys World War II fiction or books about characters trapped in morally compromising circumstances.  The book will be published in the US by Putnam on April 16. (I read the UK edition, which was published by Quercus on March 14.)

Historical Note: An intriguing event Kerr describes is the Rosenstrasse protest. In March 1943, the Nazis rounded up the last 10,000 Jews left in Berlin (at least those not in hiding), with the intent to transport them and declare Berlin judenfrei. About 1700 of these, the ones who were married to Aryans, were separated and placed in temporary holding in the Jewish community center building on Rosenstrasse. For a week, the wives and families of the Rosenstrasse prisoners demonstrated outside, loudly demanding the release of their loved ones, despite SS soldiers' threats to arrest and even shoot the demonstrators. Amazingly, at the end of the week, the prisoners were released, by Goebbels' order, and nearly all of them survived the war. 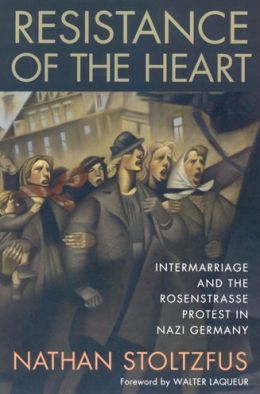 This event shows the sensitivity of the regime to bad publicity and forces us to ask what horrors might have been avoided if only the German people had risen up against Nazi actions earlier. For a thorough and fascinating history of the Rosenstrasse protest, I recommend Nathan Stoltzfus's Resistance of the Heart: Intermarriage and the Rosenstrasse Protest in Nazi Germany.

Note: Versions of this review may appear on Goodreads, Amazon and other reviewing sites under my usernames there.
Posted by Sister Mary Murderous at 4:00 AM