Maybe you're familiar with "Minnesota nice," the stereotypical well-mannered behavior of people born and raised in the state of Minnesota. It means you're self-deprecating. You do polite things like taking at least an hour to say goodbye and refusing offered food three times before accepting it even if you're half-dead starved. You avoid fuss and confrontation.

Canadians have their own stereotypical behavior, which combines well with that of Minnesotans. I can picture the talented Canadian writer Owen Laukkanen climbing off his moose after a snowy morning ride and eating pancakes hosed with maple syrup before sitting down and wrestling with his own Canadian niceness in order to write about crime. Then Laukkanen can wrench his middle-aged Minnesota BCA Agent Kirk Stevens away from his home––where he makes nice with his legal-aid lawyer wife Nancy and their kids––to team him up with beautiful young FBI Special Agent Carla Windermere, a high-octane workaholic who fishtailed her car into Minneapolis-Saint Paul from Miami.

In Laukkanen's terrific 2012 debut, The Professionals (see review here), Stevens and Windermere collaborate on a well-publicized case––the Pender gang's multi-state kidnapping spree. Criminal Enterprise begins a year later. Stevens has promised Nancy he'll do no more cowboying and is working cold BCA cases. He's trying to convince himself that the sense of accomplishment from solving one matches the thrill of working with Windermere, but he's not succeeding. While Stevens pursues an old case involving a murdered man and his missing wife, Windermere is longing for the competent, easy-going Stevens. Her current FBI partner, Bob Doughty, pulls rank and tosses a wet blanket over her attempts to solve the armed bank robbery on "Eat Street" in Minneapolis.

The bank was robbed by a ski-masked couple: a woman carrying a sawed-off shotgun and a blue-eyed man who brandished an assault rifle. The man cruelly pretended to shoot a teller before he and his partner leaped into a waiting Toyota Camry and were driven away. Your typical bank robbers tend to be amateurs or impulsive degenerates; the Eat Street robbers' weapons and behavior lead Windermere to believe they could be pros.  She begins to examine previous open-case robberies to see if she can detect a pattern and identify a suspect. On the surface, Carter Tomlin looks like a bad bet for bank robbery. Tomlin is an accountant who lives with his wife Becca and kids in a big Victorian on Summit Avenue, the luxurious Saint Paul neighborhood in which Sinclair Lewis and F. Scott Fitzgerald once lived. Tomlin over-leveraged himself to buy into the American dream, and when he is laid off from the job he's held for 20 years, it's a catastrophe. Tomlin has always believed a man provides for his family. In times of adversity, real men don't complain, they deal with it.

Tomlin deals with it by free-lance accounting and burning through savings. Desperate, he walks into the bank to talk to a loan officer, but then Tomlin has an epiphany. He walks out, buys a cheap disguise at the Walmart next door, and robs the bank instead. The take isn't much so Tomlin obtains some weapons, picks up a couple of partners, and tackles bigger targets. And, guess what? He doesn't feel emasculated any more. In fact, Tomlin feels like a god when he's holding a gun, and he begins to live for the adrenaline rush of committing crime. What do they say about addicts? They require increasingly higher-dose fixes.

Before you dismiss Tomlin as a completely unbelievable character, think about what criminologist Richard Wright, who wrote Armed Robbers in Action, says about self-reinforcing behavior: "Once somebody takes an action, in this case a shootout, then you're off and running. After that events take on a logic of their own, especially when you have these self-enclosed systems of self-reinforcing behavior. None of them make sense except in relation to one another."

This high-voltage thriller practically deserves a warning label on its cover. What with watching Tomlin befriending Stevens, Windermere trying to get the goods on Tomlin, a guy with a personal beef tracking Tomlin, Tomlin turning into a bad-ass criminal who makes ever-crazier decisions; and wondering whether Tomlin's partners in crime, Tricia Henderson and Dragan Medic, can be trusted––I'm not kidding, at one point I found my butt hovering a few inches above the chair, I was that amped up. Take your heart or high-blood pressure medication before you read Criminal Enterprise. 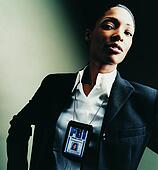 Oh, but before you do, don't neglect to read The Professionals first. It's not necessary to understand Criminal Enterprise, but do it because these books are so much fun. They look at issues such as the toll of juggling personal and professional lives, the impact of an economic downturn, the strain of leading a double life, and relationships between men and women and between parents and their children. There's an interesting chemistry between Stevens, a good cop and family man, and Windermere, a glamorous and gutsy FBI special agent. In addition, the writing is so crisp you can almost hear it crunch between your teeth, and the action builds to a jaws-clenching finish. Don't take my word for it. Pretend you're from Minnesota or Canada and be nice to yourself by reading Laukkanen.

Note: I received a free advance review copy of Criminal Enterprise. It will be published on March 21, 2013 by G. P. Putnam's Sons. I'm thrilled to learn that Laukkanen is now at work on his third Stevens/Windermere book.
Posted by Georgette Spelvin at 10:55 PM