Review of Fred Vargas's The Ghost Riders of Ordebec 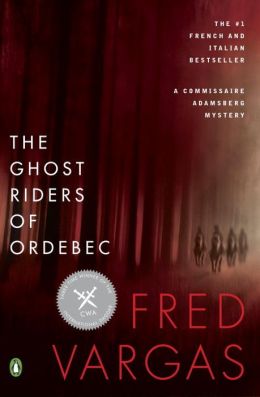 The Ghost Riders of Ordebec by
Fred Vargas

A female author named Fred and a French protagonist named Adamsberg. These are your first clues that this series is a little off plumb, but more fly at you quickly in these books, and the seventh in the series, The Ghost Riders of Ordebec, is no different. We begin with Commissaire Adamsberg of the Paris police detecting a murder just by following a trail of breadcrumbs.

Back at the station, Adamsberg rescues a pigeon whose feet have been bound together, and hands the nearly dead bird over to his team for rehabilitation. While he's hanging about outside the station, he's accosted by a timid Norman countrywoman who has been told that Adamsberg is the one man in France who may be able to help her.

Madame Vendermot tells Adamsberg an outlandish tale of a Furious Army of ghouls who periodically roam the old highways at night, placing a curse on evildoers that will cause their death within weeks. Mme. Vendermot's daughter, Lina, has seen the Furious Army, and in their company some men of their village, Ordebec. One of those men, Herbier, has disappeared and, although these men are mostly despised within Ordebec for various unpunished sins,  Mme. Vendermot wants Adamsberg to find him before he's killed––if he's not already dead.

Though Adamsberg is busy with a more conventional crime, that of the murder of one of France's preeminent industrialists, found dead in his torched Mercedes, he's intrigued by Mme. Vendermot's tale and can't resist a trip to Ordebec to look around. A country boy himself, from the South, he's charmed by Normandy's Ordebec, including the old woman, Léo, who offers him her hospitality––including Cuban cigars and Calvados––when he misses his train back to Paris.

When the Furious Army case becomes very serious, Adamsberg is called on to lead an official investigation. With two demanding active cases, he must allocate the resources of his team carefully. And what an oddball team it is, including his second-in-command, Danglard, a melancholy, walking encyclopedia with a bottomless thirst for white wine; Retancourt, a giantess whose size and weight do nothing to detract from her gift of being able to mesmerize people with hardly a word; Veyrenc, who is quite a sight, with the streaks and spots of red in his dark hair, and who has a penchant for reciting Verlaine at the most inopportune times; Mercadet, a narcoleptic; Froissy, a bulimic who stashes crackers, patés, sweet and other foodstuffs all over the detectives' office. You get the idea. Adamsberg's team also expands to encompass some irregulars, including his son, Zerk; his Spanish neighbor, Lucio; Léo and other Ordebec villagers; and even a prisoner-for-life whom Adamsberg was responsible for capturing in an earlier case. Does all this make the Adamsberg series sound so whimsical as to be silly? It's definitely quirky, but the characters' eccentricities mesh well and even their weaknesses can sometimes be used as strengths. Just as Adamsberg's absent-mindedness and apparent ignorance conceal a great, though unpredictable, intellect.

A hostile policeman calls Adamsberg a peasant, cloud shoveler, lost in the mists. He's right, but what gives Adamsberg his ability to solve crimes is that he lives close to the ground and nature. He seems like he's absent-minded, and he is, but only because his mind has wandered off to replay what he's seen, heard and even smelled, and is putting it all together to tease out what it means.

Above all, Adamsberg is human and humane. He understands human nature, for good and ill. That's how he detects murder in a trail of breadcrumbs. That's why he saves that pigeon––and vows to find out who tortured the bird.

This series is unique and original, filled with imagination and a love of the land and people of France. There's a sort of magical spell that always falls over me when I read one of these novels, and I wish Fred Vargas would hurry up and become popular enough to get her novels translated into English a lot faster.

Note: Versions of my review may appear on Amazon, Goodreads and other reviewing sites under my user names there.
Posted by Sister Mary Murderous at 4:00 AM