Here's to You, Dad

I make no accusations, but my daughter's flu is well timed. I'll take her place in the obligatory Father's Day golf game with her dad; Dear Hubby's tact will get a lot of exercise. After dinner, we'll grab bowls of popcorn and watch the 1944 movie Laura, in which a homicide detective falls for the woman whose murder he's investigating.

Throughout the day, my thoughts will drift to my own dad. We were close and shared a love of dogs, horses, wildlife, baseball, and reading. When I contemplate the books below, his voice is in my ears.

"Let's practice staying out of trouble." Compared to Adrian McKinty's Michael Forsythe, I need practice getting into trouble.

Adrian McKinty: Dead I Well May Be (2003). A vengeance-filled tale confided by Michael, a young thug who reluctantly flees the Troubles of Belfast in 1992 for New York City, where his fighting skills and cool head come in handy against Dominicans encroaching on the drug turf of Irish gangster Darkey White. All goes swimmingly until Michael can't stay away from Bridget, White's girl. White does something about this, forcing Michael to do something about that. This great series debut is darker and more violent than Dennis Lehane's Depression-era mobsters book, Live by Night (see here for review).

"She looks like she's been dragged through the hedge backwards." I'm sure Deon Meyer's Emma le Roux feels that way, too.

Deon Meyer: Blood Safari (2009). A tense standalone thriller, set primarily in South Africa's wildlife preserves, exploring that country's contemporary social issues and political history. Narrator Lemmer is a tough professional bodyguard who's never (1) lost a client, or (2) become personally involved with one. His record is challenged when he's hired by Emma, a Cape Town ad consultant recently targeted by violence, as she investigates the identity of a man wanted for the murder of four poachers. She thinks it could be her brother Jacobus, who disappeared from Kruger National Park 20 years ago. Writer Meyer's exotic landscape is populated by strong characters, vividly described.

"I'm not sleeping; I'm just resting my eyes." Take a gander at a Kafkaesque insomniac who has vanished from his Paris apartment.

Georges Perec: A Void (1994). You'll have to read it to believe it, but Frenchman Perec, a member of Oulipo, a group of mathematicians and writers who put constraints on their work to foster creativity, used no letter "e" in his 300-page book, and translator Gilbert Adair managed the same astonishing feat in English. This has amusing consequences, as the friends of missing Anton Vowl search for clues in his diary and notebooks, which contain e-less excerpts from Hamlet's soliloquies ("Living or not living: that is what I ask") and Poe ("Quoth that Black Bird, 'Not Again'"). Their investigations—interrupted by deaths—provide very satisfying entertainment for people who love words and highly original writing.

"You kids learn to get along." This was difficult for us war-mongering siblings; however, tattling or whining to Mom or Dad was discouraged by them and strictly taboo among us. If threatened by outside disaster, we sibs always closed ranks.

Tanizaki Jun’ichirō: The Makioka Sisters (Japan, serially in the 1940s; the USA, 1957). Set against the backdrop of the Second Sino-Japanese War and pending World War II, this is the poignant tale of a wealthy Osaka family who tries to find an acceptable husband for the third sister, as Japan modernizes and their finances and social standing decline. According to custom, Yukiko Makioka, a shy and obedient woman now age 30, must wed before the much more westernized and rebellious fourth sister, Taeko, who already has a secret, unsuitable boyfriend. Both Yukiko and Taeko live with second sister Sachiko, a very caring woman, and her husband; the oldest sister, Tsuroko, refuses to acknowledge her family's deteriorating fortunes while she and her husband move to Tokyo. Watching these sisters maneuver through these perilously changing times makes unforgettable reading.

My dad had so many admonitions for me involving my mother, ranging from "Don't talk back to your mother" to "Ask your mother," I hardly know which to choose. I'll settle for one of my favs, "We won't worry your mother about this." She would think this book very strange.

Sergio De La Pava: A Naked Singularity (self-published, 2008; Univ. of Chicago, 2012). At the center of this nearly 700-page book of difficult-to-convey bizarreness is the son of Colombian immigrants, our narrator Casi, a perfectionistic and obsessional New York public defender, who has never lost in court. Then he does, and a lawyer colleague has an interesting proposition. In a way, this novel is a compelling––albeit satiric––legal thriller, as Casi grasps at justice for his beleaguered clients and works on behalf of a mentally handicapped man sitting on death row in Alabama; yet, as if our justice system doesn't contain enough room for all the absurdity and existential angst, there are many, many digressions into philosophy, television, boxing, and who knows what all. I'm still reading it, but I can tell you this: it's an entertaining book for those who enjoy unconventional writing and unique voices. For fans of David Foster Wallace, Thomas Pynchon et al. If it takes a straightforward plot to please you, look elsewhere for fun. 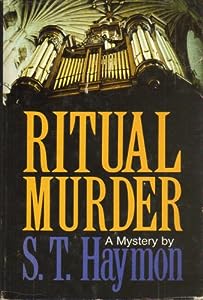 "I'm not going to tell you again." But he did. Certain issues came up over and over. Man, considering our incorrigible natures, my patient, yet determined dad did wonders with his kids.

S. T. Haymon: Ritual Murder (1982). Haymon's writing is always clear and elegant; she liked to juxtapose an odd murder and an alien setting, such as a stately home, a cathedral, or a museum. In this second series book, Haymon creates copy-cat victims separated by centuries when the mutilated body of Anglebury choirboy Arthur Cossey is found in the excavated tomb of Little St. Ulf, a 12th-century victim of ritual murder. Appealing Det. Inspector Ben Jurnet, who's preparing to marry Miriam and despises the nickname "Valentino," and his Welsh sergeant begin with the question of child molestation before their suspenseful investigation moves to issues of anti-Semitism and drug trafficking. Fans of Ruth Rendell, P. D. James, Batya Gur, Deborah Crombie, or Caroline Graham should check out the Jurnet series, which begins with Death and the Pregnant Virgin.

"Good night, sleep tight./ Don’t let the bedbugs bite./ And if they do/ Then take your shoe/ And knock 'em 'til/ They’re black and blue!" Dad, I wish you could have met hit woman Clara Rinker.

John Sandford: Mortal Prey (2002). We follow two story lines in a furious game of cat-and-mouse between a smart and lucky lawman and an obsessed, cold-eyed killer, who've met and like each other. After nearly killing Minneapolis cop Lucas Davenport in 1999's Certain Prey, Clara ends up in Mexico. A botched attempt to kill her is fatal to her fiancé and unborn child. Assuming the triggerman was hired by four old employers, a seething Clara sets on a rampage through St. Louis, Missouri. The FBI drags Lucas away from his preparations for a new job, house construction, and wedding to aid their agents there. This is the 13th book in Sandford's Prey series, but there's not a speck of staleness to be found. Gotta love Lucas, a warm and generous hulk, who sold the role-playing game he developed, and now drives a Porsche and indulges his taste in clothes. I rooted for Lucas and Clara, as I did for both cat and mouse in Owen Laukkanen's 2012 debut, The Professionals (see review here), featuring young kidnappers also pursued by a likable Minneapolis detective and the FBI. 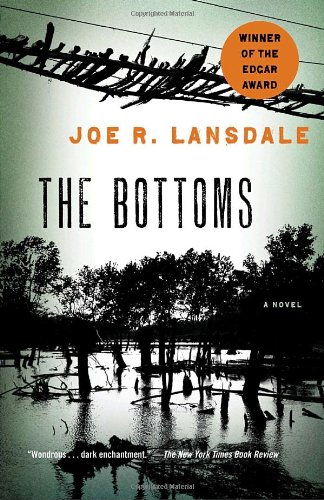 "Did I raise you in a barn?" After I pointed out that, yes, I mostly was raised in our barn, my dad switched to, "Were you raised by wolves?" Got me there, Dad.

Joe R. Lansdale: The Bottoms (2000). Narrator Harry Crane, now in his 80s and confined to a nursing-home bed, looks back at Depression-era East Texas when he was 13, and he and sister Tom (short for Thomasina) roamed the woods, scaring each other with stories about the Goat Man. One day they discover the disfigured body of a young black woman hanging by wire from a tree in the creek area called "the Bottoms." Their father, Jacob—town barber and constable—attempts an investigation that encounters extreme racism and provokes violence. As more corpses come to light, Jacob takes to drink. The combination of innocent children coming of age in the South, a crime involving race, and a parent who tries to do the right thing is reminiscent of Harper Lee's To Kill a Mockingbird, but this beautifully written book, which won an Edgar and was nominated for numerous other crime-fiction awards, is much more unsettling and violent than Lee's novel or Lansdale's Hap Collins/Leonard Pine books.

I hope fathers are enjoying a wonderful Father's Day with their families. If you're remembering your father, as I am mine, I hope your memories warm you.
Posted by Georgette Spelvin at 6:00 PM