Salvo Montalbano and the sea go together like spaghetti and squid ink. It may not work as a combination here, but in Sicily it is a match made in heaven. But Montalbano began his career as a policeman in Mascalippa, an area of meadows carpeted with grass, polka-dotted with livestock, mountains in the distance but not a breath of salty air and it was killing him. He thought it was akin to being in jail. 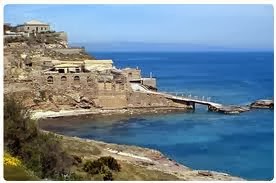 When he heard a rumor that he was to get his promotion to Chief Inspector, he was not sure whether that was good news or bad news. Fortunately for him, his boss had been able to read his hangdog expressions over the past years and had recommended that he get his promotion, but in a different location: Vigàta, on the coast.

He took a trip to visit his home-to-be and, just as he got out of the car, he was assailed by an exquisite perfume, a mixture of stagnant seawater, rotten seaweed, decaying fish, ancient ropes and sardines. He knew he could be happy here.

The first thing he did was to find a trattoria on the main drag where, after he had eaten enough for four or five people, he still felt light as a feather. Salvo felt absolutely certain that the move to Vigàta was preordained. The only fly in the ointment was in the guise of an almost insignificant traffic accident that occurred right in front of Montalbano, who had yet to identify himself to anyone in the town as a policeman, much less their new chief Inspector.

As Montalbano was waiting outside the restaurant, a sports car came speeding out of nowhere. It swerved slightly and sideswiped a slower car. The driver of this slower car was an elderly gentleman wearing glasses. The elderly man stopped his vehicle and got out to inspect it. The speeder in the roadster got out of his car and approached the old man and smashed him in the face before the speeder was forced back into his own car by a passenger and then tore off. 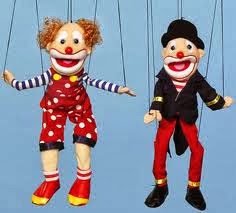 Montalbano took charge, but there was a traffic cop there as well, and it would be some time before Montalbano settled into his job in Vigàta. By the time he did, this little case began to develop twists and turns, with strings pulling at Salvo this way and that. He actually began to feel that thin, invisible wires were moving him forward like a puppet. 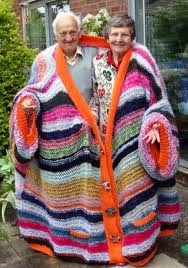 Who wrote that? "Ah, Pirandello," thought Montalbano, but this thought segued into the plot of the Argentine author Borges, who narrated the plot of a mystery in which everything could be traced back to the random encounter between two chess players on a train who had never met before. The two players planned a murder, executed it and managed to avoid raising any suspicion. This first case is like many of Montalbano's cases. He has to be more wily than the crooks and the mafia, and slyer than the politicians, if he wants to keep landing on his feet. Particularly if he wants to do it with his honor and integrity intact.

Carmine Fazio, who becomes Montalbano's deputy, wants to understand what kind of boss he is going to be working under. Salvo explains. His philosophy is comparable to homemade sweaters made of wool.

But that's a pattern I can't divulge without giving away too much. This ebook novella is a prequel that is as enjoyable as the entire Camilleri series.

Note: Montalbano's First Case was translated from the Italian by Gianluca Rizzo and Dominic Siracusa and published by Mondadori/Open Road Integrated Media in October 2013. I received a free e-galley from NetGalley for purposes of review.
Posted by Maltese Condor at 11:58 AM