Thanksgiving Dinner and other Disasters If there is one thing I have learned after many years of preparing Thanksgiving meals it is this: Never, ever mess with the star of the show. I can get a little creative with vegetables and rolls, and even vary the stuffing recipe a bit, but there must be no variations when giving guests the bird.

Literally no one enjoyed the very expensive free-range turkey I ordered from an upscale purveyor one year. While the idea of fowl cavorting gaily about the fields eating whatever they like is heartwarming, this particular bird must have had very curious tastes indeed. It was so gamy that I should have soaked it in milk for a few days beforehand. Even the dog was suspicious of it. And need I mention that you should never brine a turkey that already has "x% of y solution" injected into it? Wish I'd realized that before I tried; everyone drank quite a bit that year, with very mixed results. 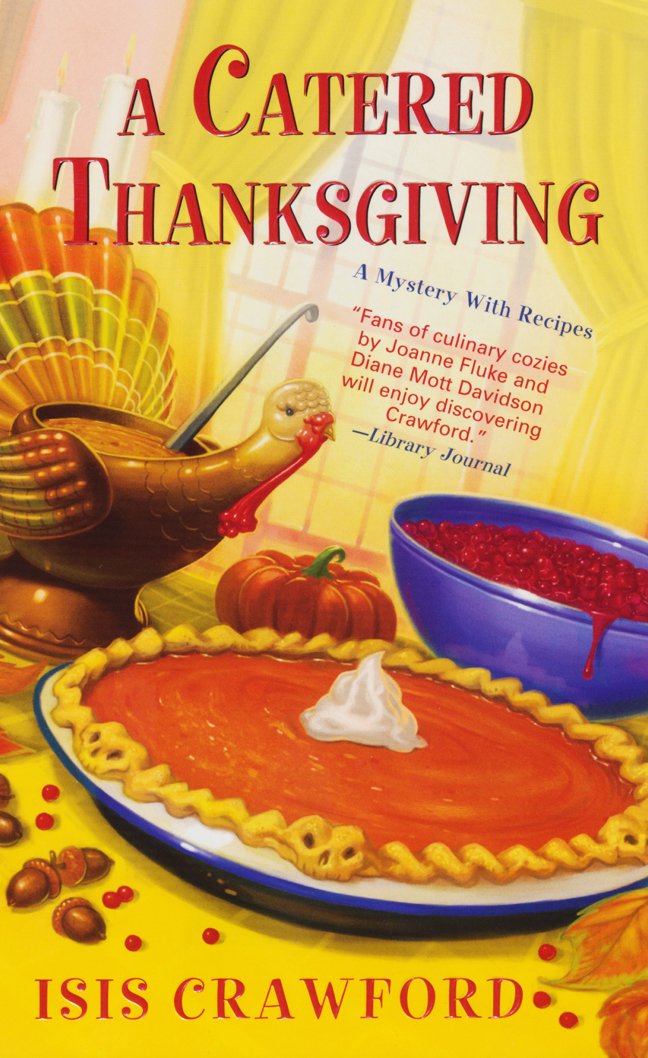 In Isis Crawford's A Catered Thanksgiving (A Mystery with Recipes), rich old Uncle Monty is that picky relative for whom nothing is ever quite right. When he officiously invades the kitchen and opens the oven to check on the turkey, it explodes violently, blowing off the top of his head. Libby fears her new drunken stuffing recipe might have been the culprit, but there are plenty of other suspects with very good motives at this memorable feast.

The most explosive Thanksgiving event I can remember (aside from politics and football) occurred one Black Friday. We kids always came down early and reprised Thanksgiving dinner with leftovers for breakfast. When we cleared up after our impromptu feast, no one realized that the big pot of gravy had been sitting out all night. Mom served her usual anticipated waffles with leftover turkey and gravy for dinner that night. They tasted just fine, but with eight people in the house and only two bathrooms, our house was Misery Manor all night as people did a quick two-step past each other down the hall to pound on bathroom doors.

Unless you live in a mansion, one of the perennially vexing issues at Thanksgiving is where to seat guests for dinner. Like Sleeping Beauty's mother, I carefully count out seating, flatware, and cutlery, but sometimes we are surprised by extra guests and I may wind up eating my turkey from a leftover Fourth of July paper plate with a seafood fork. One year a young cousin blew in from the West Coast and appeared at our door with a strict vegan girlfriend and the biggest dog I've ever seen. I didn't even have any soy milk in the house to feed the poor girl cereal. She finally picked at a salad and some vegetables (we didn't mention the butter) and water crackers. The dog ate everything––including, I think, a damask napkin (we never found it)––and was perfectly capable of helping himself from the table, thank you.

Dogs figure prominently in author Debbie Viguié's I Shall Not Want, the second in her series of Psalm 23 cozy mysteries set around major holidays. It's the week before Thanksgiving, and Cindy Preston, secretary of First Shepherd Church, is helping her wealthy friend, Joseph, with his new charitable project. Joseph proposes matching homeless dogs with homeless people, in the hope that both will benefit. Joseph's charity will pay for the dog food and veterinary care, and help to find jobs and pet-friendly housing for his clients.

While the kickoff of the event is marred by the murder of Joseph's secretary, over 50 dogs are matched with indigents. But within a few days, the recipients of the charity are being murdered and their dogs stolen. The police are baffled. It is up to Cindy and her rabbi friend Jeremiah to solve the murders in this very light cozy.

This year, Hanukkah, the eight-day Jewish Festival of Lights, starts on November 27, the day before Thanksgiving in the U.S. Usually it occurs closer to Christmas. Does this mean that latkes (yum!) will replace mashed potatoes at many Thanksgiving meals?

With very good luck, the kids will remember in December that they received their holiday gifts in November. If not, this could turn out to be a very expensive holiday season for many parents! 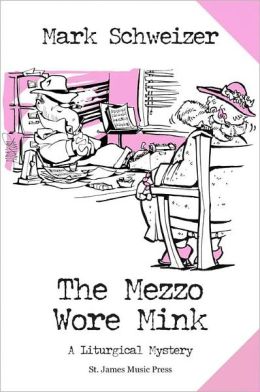 The Mezzo Wore Mink is the sixth in author Mark Schweizer's hilarious series of liturgical mysteries. Police Chief Hayden Konig doubles as the choir director of St. Barnabas Episcopal Church in the small North Carolina town of St. Germaine. While Hayden enjoys both of his jobs, what he really wants is to write a successful noir mystery like his idol, Raymond Chandler.

Thanksgiving is coming and St. Barnabas has yet another new preacher––the previous few having been murdered, imprisoned, or fled the state in sheer terror. This one wants to hold a Harvest Festival at the church, complete with pilgrims, Indians, live turkeys, and original music. The Living Gobbler Festival is born.

What could possibly go wrong with live turkeys and children with hatchets performing together? Add a skit featuring members of the nearby Christian Nudist Camp, a couple of murders, and several hundred escaped vicious cross-bred farm animals, and stir. No additional seasoning is required. Hayden has kept me laughing throughout this pungent slapstick series.

In the spirit of Thanks-giving, many supermarkets participate this time of year in local Food Bank Check-Out Hunger drives by offering either in-store collection boxes for food donations or these handy coupons available at checkout. It couldn't be easier––rip off a coupon and hand it to the cashier or scan it. The amount of your donation is added to your bill and sent automatically to the sponsoring charity. Or give through your place of worship or social organization, wherever works for you. Whatever form of seasonal scrimmage you participate in, your own turkey and abundance of trimmings will taste just a little better if you have helped ease the hunger of others. Happy Thanksgiving, all! Posted by Periphera at 8:28 AM